The conservative press and Israel's "miracle"

A vast well of long-simmering anger and rage comes to the surface. But will the right even notice? 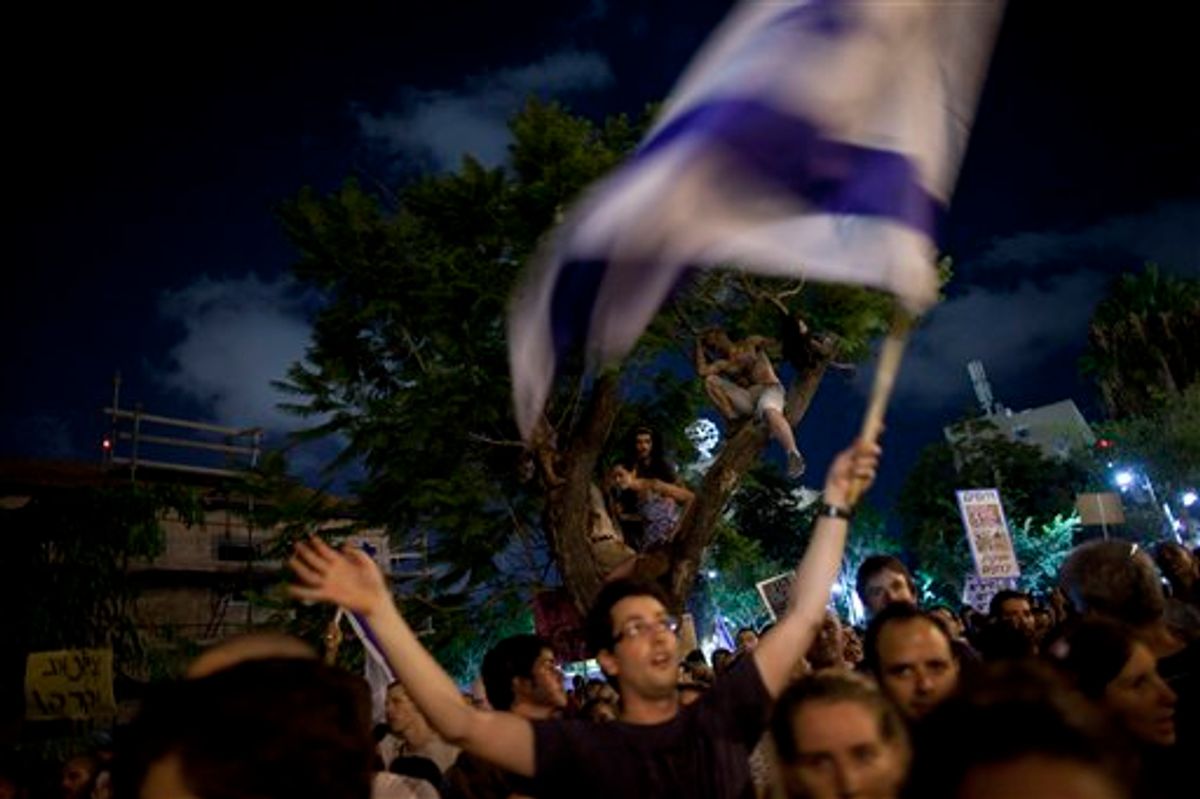 Thousands of Israelis march during a protest against the rising cost of living in Israel, in central Tel Aviv, Israel, Saturday, Aug. 6, 2011. Angry over the ever increasing cost of living, Israelis poured en masse into the streets of major cities Saturday night in a big show of force by the protest movement that is sweeping the country and proving to be a real challenge to Prime Minister Benjamin Netanyahu's government. Thousands of mostly middle class Israelis marched through the streets in central Tel Aviv waving flags, beating drums and chanting: "Social justice for the people." (AP Photo/Oded Balilty) (AP)
--

The conservative press has, over the past several years, regularly touted Israel’s "economic miracle."

Indeed, the "economic miracle" has become a full-fledged conservative talking point -- Israel’s economic dynamism and pro-business posture supposedly sets the country apart not just from its backward and authoritarian neighbors, but even from "decadent" developed countries in Western Europe and North America. The current Israeli government is even more overtly right-wing in its economic approach than its forbearers, and is fervently convinced of the need for liberalization, lower taxes, deregulation, and the entire panoply of Washington-consensus neoliberalism.

I have no interest in writing a needlessly contrarian Slate-like article that would attempt to argue that, despite its appearance, Israel is actually a poverty-stricken backwater. Israel’s economy has, of course, made significant and noteworthy progress -- it would be simply impossible to argue that Israel hasn’t become a world leader in certain sectors such as robotics, biotechnology, and defense.

However, while it was writing its paeans to Israel’s economic dynamism, the conservative press apparently never thought to ask what Israelis themselves thought about the "miracle" their country was undergoing. If they had, they might have discovered a vast well of long-simmering anger and rage of the sort that almost always seems to accompany the implementation of neoliberalism (concerns about low wages, increased inequality, a shrinking middle class, and rising costs of living).

These concerns have now exploded to the surface and hundreds of thousands of people have marched all throughout Israel to register their discontent with the current situation.  As the Financial Times recently reported:

In a striking procession of strollers, young parents marched through Tel Aviv to demand better childcare. Dairy farmers, meanwhile, decided to flood a busy intersection with milk in an effort to highlight their low income.

The demands, too have grown. What started out as a protest against housing costs has morphed into calls for a sweeping overhaul of Israel’s economy and society: the protesters want a new taxation system (lower indirect taxes, higher direct taxes), free education and childcare, an end to the privatisation of state-owned companies and more investment in social housing and public transport. There is talk of imposing price controls on basic goods and a broader desire to see an end to “neo-liberal” government policies.

As time has passed the protests have grown and, if anything, become even more radical in their demands. In a noteworthy, and slightly ominous, bit of political theatre activists recently placed a guillotine in the middle of the tent city that has served as a nexus for the protests. I highly doubt even the famously obtuse Netanyahu failed to understand the symbolism.

Now 300,000 people (an absolutely enormous figure for a country whose entire population is only 7.5 million) don’t wake up in the morning and suddenly decide, "Rather than going to work, I’m going to live in a tent city for several weeks to protest the government’s economic policies." The sort of discontent, frustration, and anger so clearly visible in the Israeli protests were there all along -- they were simply ignored because they were considered inconvenient and distasteful.

Now the impulse to ignore information that contradicts one’s worldview is not purely the province of conservatives, but I am still astounded at the remarkably ham-handed way in which they go about advocating for their preferred policies. In practice, the only way that neoliberalism can actually work is if the bulk of the population doesn’t become violently enraged at the inevitable iniquities. You would therefore expect advocates of neoliberalism to be extremely wary of the possibility of widespread discontent and to do something (even insincere half-measures) to attempt to head it off.

Yet the conservatives who so regularly touted Israel and its "miracle" economy will surely not lose a moment’s sleep. They regularly touted the Baltics before they suffered some of the most shocking economic collapses in history and went right back to flacking for them the minute they stopped collapsing.

It’s surely not a very shocking development to learn that the conservative media feels comfortable cutting a few corners, but it’s always very entertaining to see their propaganda exposed for what it is. In the conservative telling of the story, average Israelis ought to be overjoyed at their material circumstances and should applaud the "world beating" success of their economic model. Yet, in reality, hundreds of thousands of Israelis are so enraged and desperate, so exasperated with the failures of their economy, that they have taken to the streets. How ungrateful the little people can be!

Lastly, as a takeaway: If the "free market" press starts relentlessly touting your country’s economic model, head for the hills. Immediately. Having one’s economic policies gain the full-throated support of the WSJ and National Review is an almost certain sign that apocalyptic social conflict, or full-scale economic collapse, is just around the corner.