A Cake album becomes a book 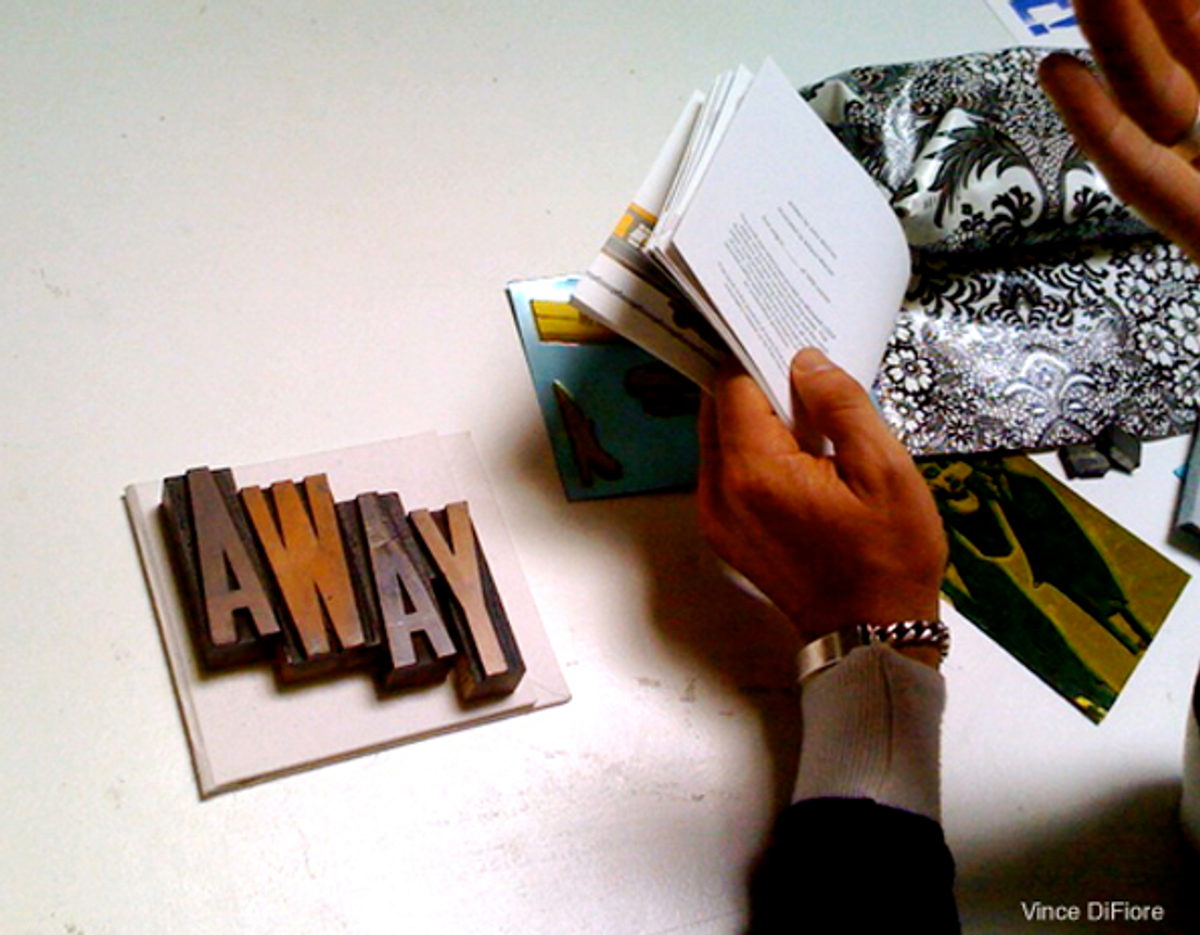 It looks like Cake is going far beyond the distance. The Sacramento-based rock band, known for their unique sound and frontman John McCrea's recognizable half-spoken vocals, not only released their sixth studio album early this year, but they also got their hands a little dirty with some handcrafted graphic work.

Cake has been collaborating with BANDmade Books in San Francisco since June 2010 to publish "Bound Away," an artfully handmade and visual book that will be released in mid-September. The small but ambitious "Bound Away" is actually from Cake's most recent album "Showroom of Compassion," turned into a book, combining text (McCrea's lyrics), illustrations by R. Stuhmiller, and music (as it also functions as a seriously cool CD case for the single).

Cake met with Pam DeLuco and BANDmade Books to discuss the layout, storyboard and design for "Bound Away."

BANDmade Books founder and creative director Pam DeLuco thought up the idea to work with musicians and turn songs into beautiful books about two years ago. She approached Cake with the idea, after a year of trying to select the first band for the project.

"Musicians really are our modern day poets and I thought it would be an interesting project to take one song and turn it into a book. It would make you look at the song differently and it would make you notice the book as a form of communication," said DeLuco. "I am familiar with CAKE's music and lyric sense and I knew that most of their songs could work as a book, so that's why I chose them."

Xan McCurdy, the guitarist for Cake, was arranging the wood type BANDmade Books pulled out to show as an example of what was possible to print. BANDmade Books noticed the word "AWAY" arranged in an interesting way. They kept Xan's arrangement and used it to print the covers.

The band chose "Bound Away" as the song for the book, because the process of making books the old-fashioned way seemed to work well with the old-fashioned feel of the song (which McCrea said had a "matte finish quality" that lent itself to the texture of handmade paper).

All of the band members worked with BANDmade Books during production -- from making paper to hand carving linoleum to letterpress printing. Gabriel Nelson, Cake's bassist who was really involved in the design and print creation of the book, was the only one in the band who already had experience making paper by hand.

"I had never made paper before this project," said McCrea. "I really enjoyed it. I like the recycling aspect of the whole thing. Our music is handmade music that happens to get mass produced and distributed in various ways, but it is still a craft," said McCrea. (Although he's had his share of experience with printing from printing up all of CAKE's t-shirts and posters.)

Left: The band's old cotton clothing. Right: The clothes were cut into 1-inch squares before put into the hollander beater where the fiber was beaten into pulp.

Left: John McCrea making paper from the band's clothing. Right: The formed sheets are put under a hydraulic press to remove most of the water.

McCrea double dipped to make a two-toned sheet of paper using a mould and deckle.

"When I retire from music, I plan on making paper again. In terms of finding a link between Cake and making books by hand, I would say that since Cake has always been a DIY band, this project was in keeping with our aesthetic," said Nelson.

"Bound Away" fits well with Cake's go green advocacy (they even give away a tree at every show). The band used their clothing to hand make the cover paper for the book, and BANDmade Books collected jute coffee sacks from a local roaster to make the paper for the endsheets. And the interior was printed letterpress on 100 percent PCW paper that was manufactured with wind power. Stuhmiller's illustrations were hand-carved linoleum, which, along with the metal type used for the text, seemed to fit well with Cake's other album covers that look like lino/wood cuts. DeLuco even handspun hemp herself for the binding thread, using beeswax from her San Francisco beehive.

"The book was always going to be completely handmade because as a craftsperson I make everything. Cake was definitely an inspiration for the choice of materials and processes used," said DeLuco. "I knew they'd appreciate making a book with as many recycled/reclaimed materials as possible."

Left: Close-up of the lock-up on the press. Right: Gabe Nelson showing off a sheet he just printed.

Once printed, the pages were trimmed down to size and collated according to ink saturation.

As far as the band's hopes for "Bound Away," McCrea said that they'd like to use a portion of each edition to help raise money for 826 Valencia, an organization that helps kids learn to write, and the Hamilton Wood Type Museum. And Nelson hopes that "people will enjoy the book and be inspired to look into doing something creative in their lives."

There were 1,000 books published, and the Rock & Roll Hall of Fame Library Archives also has a copy for those of you who can't get your hands on one. "We realize that not every Cake fan will get to own a copy of the book but we're hoping to get it into special collection libraries across the country and possibly abroad so at least people can have a chance to hold and experience the book," said DeLuco.

Left: They aligned the book board that would become the front and back, along with a piece of recycled heavy card stock for the spine. They applied glue to the paper around the boards and carefully turned in the edges and corners to form the case of the book. Right: A sewn text block is being glued to its case.

The stack of finished books.

All images and captions courtesy of BANDmade Books.