Cameron: No culture of fear on U.K.'s streets 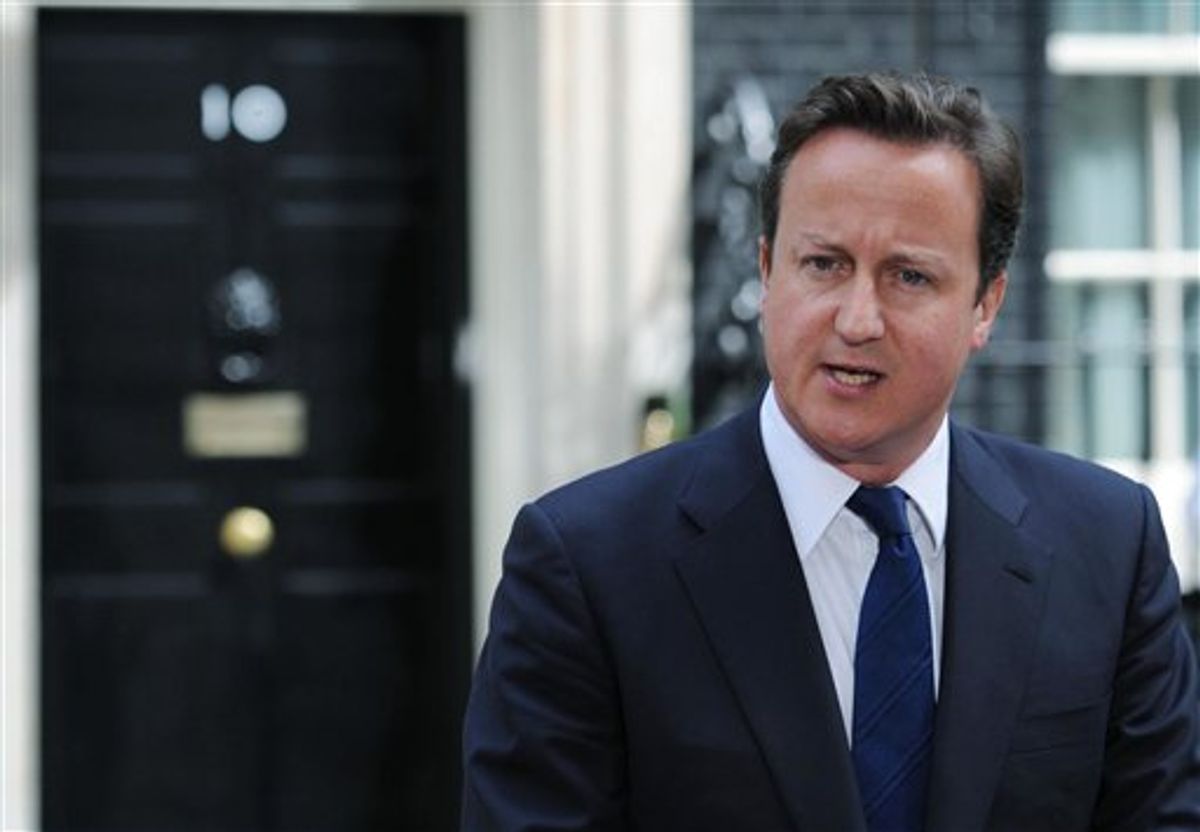 Cameron told lawmakers there would be no "culture of fear" on Britain's streets, as police raided houses to round up more suspects from four days of rioting and looting in London and other English cities. He said the government was "acting decisively" to restore order after the riots, which shocked the country and the world.

"We will not allow a culture of fear to exist on our streets," Cameron said. "We will not let a violent few beat us."

Lawmakers were summoned back from their summer vacations for an emergency session of Parliament in the riots as government and police worked to regain control, both on the streets and in the court of public opinion. Calm prevailed in London overnight, with a highly visible police presence watching over the capital, but tensions remained high throughout the country.

Cameron promised tough measures to stop further violence and said "nothing should be off the table," including water cannons and plastic bullets.

He said riot-hit businesses would receive help to get back on their feet, and promised to look to the United States for help in fighting the street gangs he blamed for helping spark Britain's riots.

Cameron told lawmakers that he would look to cities like Boston for inspiration, and mentioned former Los Angeles and New York Police Chief Bill Bratton as a person who could help offer advice.

He said the government, police and intelligence services were looking at whether there should be limits on the use social media sites like Twitter and Facebook to spread disorder. Authorities are considering "whether it would be right to stop people communicating via these websites and services when we know they are plotting violence, disorder and criminality," he said.

Meanwhile the number of people arrested in London rose to 922 since trouble began on Saturday, with 401 suspects charged.

Deputy Assistant Commissioner Stephen Kavanagh said raids to round up suspects began overnight, and more than 100 warrants would be executed. Hugh Orde, head of the Association of Chief Police Officers, said there would be "hundreds more people in custody" by the end of the day.

The violence has revived debate about the Conservative-led government's austerity measures and sparked debate from all parts of the political spectrum about its cause. But, Deputy Prime Minister Nick Clegg said the "sociological debate" about the origins of the violence was for the future.

"Right now it's important that people are reassured that their streets are made safe, their homes are made safe and society is allowed to move on," Clegg told BBC radio.

The London police said it would keep up the huge operation -- involving 16,000 officers -- for at least one more night.

There was a brief outbreak of trouble in Eltham, southeast London, where a group of largely white and middle-aged men who claimed to be defending their neighborhood pelted police with rocks and bottles. Police said the incident had been "dealt with" and a group was dispersed.

There were chaotic scenes at courthouses, several of which sat through the night to process scores of alleged looters and vandals, including an 11-year-old boy.

The defendants included Natasha Reid, a 24-year-old university graduate who admitted stealing a TV from a looted electronics store in north London. Her lawyer said she had turned herself in because she could not sleep because of guilt.

Other cities where looters had rampaged earlier this week also came through the night largely unscathed, though for the first time minor disturbances were reported in Wales.

Tensions flared in Birmingham, where a murder probe was opened after three men were killed in a hit-and-run incident as they took to the streets to defend shops from looting.

Chris Sims, chief constable of West Midlands Police, said a man had been arrested on suspicion of murder. Police on Thursday were given more time to question him.

Cameron's government has slashed police budgets as part of the cuts. A report last month said the cuts will mean 16,000 fewer police officers by 2015.

Cameron said the cuts would not hit front-line officers.

He said that "at the end of this process of making sure our police budgets are affordable we will still be able to surge as many police officers on to the streets as we have in recent days."

But London Mayor Boris Johnson -- like Cameron, a Conservative -- broke with the government to say such cuts are wrong.

"That case was always pretty frail and it has been substantially weakened," he told BBC radio. "This is not a time to think about making substantial cuts in police numbers."

Scenes of ransacked stores, torched cars and blackened buildings have frightened and outraged Britons just a year before their country is to host next summer's Olympic Games, bringing demands for a tougher response from law enforcement.

Soccer authorities announced Thursday that Tottenham Hotspur's season-opening match against Everton on Saturday was being postponed following Saturday's disorder in the Tottenham neighborhood, which sparked trouble across England.

Officials said there were ongoing safety concerns in the area around the north London club's White Hart Lane stadium, which has seen police resources stretched.

A Wednesday match between England and the Netherlands at London's Wembley stadium also was canceled.

Britain's riots began Saturday when an initially peaceful protest over a police shooting turned violent. That clash has morphed into general lawlessness that police struggled to halt.

While the rioters have run off with goods every teen wants -- new sneakers, bikes, electronics and leather goods -- they also have torched stores apparently just to see something burn. They were left virtually unchallenged in several neighborhoods, and when police did arrive they often were able to flee quickly and regroup.