Which of the Republican White House aspirants will be the first to fall on his (or her!) sword? 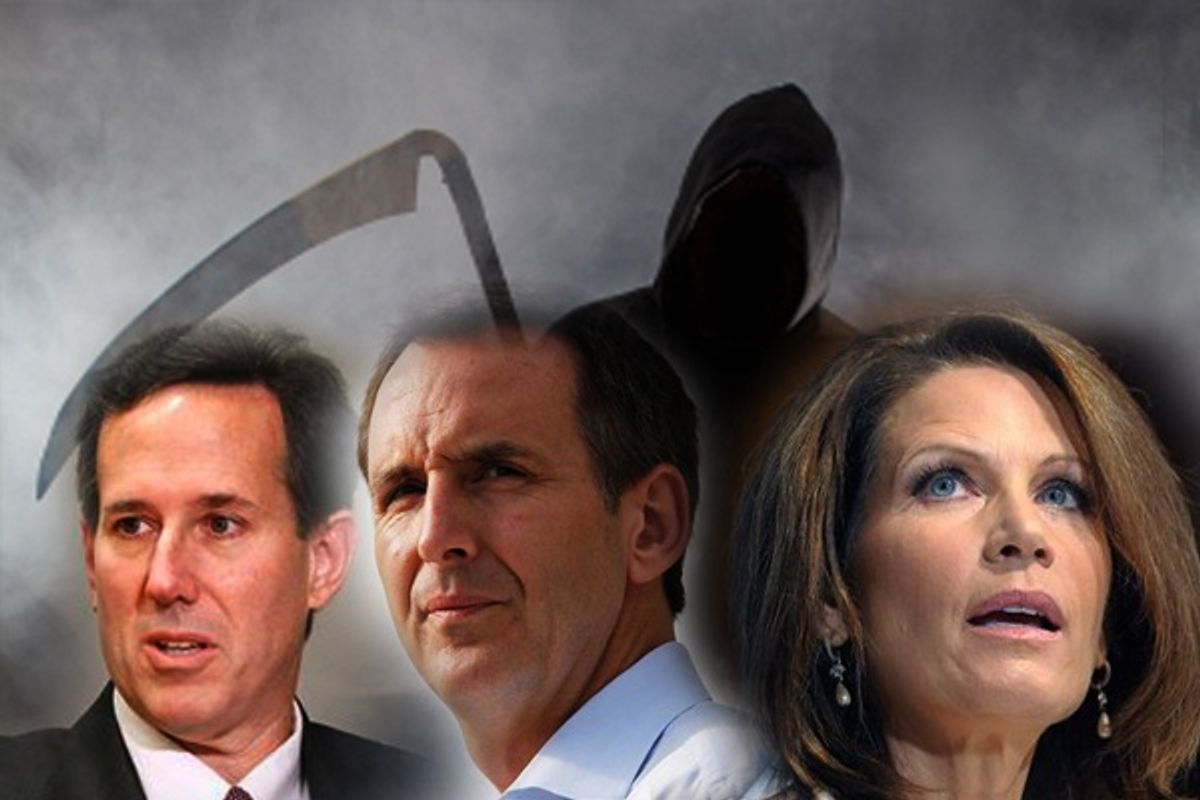 The Republican presidential candidates will take part in a nationally televised debate in Iowa tonight, and the stakes are high! Yes, this is a cliché, but it really is true in this case -- at least for a few of the candidates.

The debate will take place less than 48 hours before the important/loathed/farcical Iowa Straw Poll, a quadrennial test of candidate popularity and organizing strength that has hastened the demise of numerous candidacies. This year's straw poll is a little tougher to figure than usual, since two heavyweight candidates -- Mitt Romney and Rick Perry -- aren't contesting it. But others are, and the prospects are good that the field will soon be thinned.

With that in mind, we present the first installment of what may become a recurring feature in the months ahead: the GOP candidate death watch. The candidates below are ranked in order of the earliest date at which they could conceivably withdraw from the race. Note that this is not the same as ranking them by their chances of winning the nomination. Not every candidate has the same strategy and same motivation for running for president, and as you will see below the best odds of capturing the nomination do not necessarily correlate to the latest possible exit date. On to the rankings!

(No. 1) Tim Pawlenty: We've had the former Minnesota governor on our death watch radar for a while now, and for good reason. He's tried to position himself as the consensus candidate, mainstream enough not to blow a winnable general election against Obama but conservative enough to satisfy the party's single-issue activists. There was, and still is, plenty of room in the GOP race for a candidate like this. What we've learned, though, is that in addition to checking off all the right boxes and not seeming too scary, Republicans also want their candidate to have a personality. Pawlenty has flunked this test and, thus, utterly failed to take off as a candidate.

But he has invested heavily in the straw poll, and so it has come to this: If he can win it (and he definitely can), his campaign will have new life and his position on our death watch will plummet. If he finishes a close second, he can probably claim that he showed strength and hang on for a while. But this could be tricky: Because Romney and Perry are skipping the event, it will be hard for Pawlenty to lose to anyone on Saturday and spin it as an impressive showing. Pawlenty is struggling to convince the media and influential Republicans (especially donors) that he's for real; it will be tough to fool this audience. And if he loses and it isn't even close, well, then it may time to write the obituary.

(No. 2) Rick Santorum: There's a good case to be made for ranking Santorum ahead of Pawlenty. The former Pennsylvania senator dramatically moved his family to Iowa this summer and his campaign is showing no life at the national level. Santorum has always been easy to dismiss as a serious candidate, and if he can't post a breakthrough at an event like the straw poll, which is littered with the religious conservatives who should be his base, where can he? Oddly, though, it's because Santorum has been so easy to write off that he gets the No. 2 position in the death watch. Unlike Pawlenty, who will face immediate and intense speculation about the future of his candidacy if he fares poorly on Saturday, Santorum could at least potentially carry on as a hopeless no-shot, content to accept invitations to debates, party events and television interviews that would never come his way if he was still just an ex-senator.

(No. 3) Jon Huntsman: Since he's not competing in it, there are no expectations for him in the straw poll. So it shouldn't really hurt Huntsman if he receives, say, fewer than five votes on Saturday. But he's No. 3 on our list for another reason -- his failure to demonstrate that actual Republicans are even remotely as interested in his campaign as the media. His strategy, supposedly, rests on skipping Iowa and making a stand in New Hampshire. But it's still unclear what, exactly, he's selling that Republicans in New Hampshire or anywhere might be interested in. The way things are going, it wouldn't be surprising to see Huntsman withdraw sometime this fall.

(No. 4) Herman Cain: The pizza magnate had his big moment this spring, when he stole the show at a lightly attended debate in early May. For a few weeks, his poll numbers shot up and he was a hot topic on cable news shows. Then along came Michele Bachmann, who stole the show at the second (and better-attended and more highly rated) debate, and there went Cain's moment. He has lost campaign staff, and expectations for the straw poll are low. Clearly, he's going nowhere.

The question is how much this matters to him. On the one hand,  simply getting to run for president and be treated as a (basically) serious candidate is gravy for Cain; after all, he was totally unknown before the last few months and his only previous foray into elected politics was a losing (by nearly 30 points) campaign for the GOP Senate nomination in Georgia in 2004. So why should it matter to him if he's on a dead end street now? On the other hand, his brief surge earlier this year did make him into a more credible political figure than he's ever been before. If he wants to preserve this status (and maybe, say, run for statewide office in Georgia again), he probably shouldn't stick around too long and embarrass himself. For now, the best bet is that he'll last through Iowa and New Hampshire, then drop out.

(No. 5) Michele Bachmann: The main threat to her on Saturday is high expectations. She's moved into the lead in Iowa polling and the straw poll itself seems tailor-made to her strengths. So with Romney and Perry on the sidelines, she really should win. So a loss could be embarrassing for her -- but hardly fatal. Her longer-term threat is Perry, who should formally enter the race on Saturday in South Carolina and who could be attractive to the same cultural conservatives who are now tempted by Bachmann. If she is seen as underperforming at the straw poll, it could add to his momentum as he launches his campaign.

No matter what, though, it's almost impossible to see Bachmann exiting the race before the actual caucuses. Unlike Pawlenty, she's already shown real life in polling -- in Iowa and elsewhere. If she can win or fare well in Iowa this winter, her campaign will surely continue after the caucuses. If she fares poorly on caucus day, then the Bachmann death watch can begin.

(No. 6) Mitt Romney: Currently, Romney is the most likely candidate to win the Republican nomination. But that doesn't mean he's last on the death watch. That's because his strategy puts such a premium on New Hampshire. Right now, he's trying to manage expectations in Iowa. Surely, he will end up competing in the state (even John McCain did in 2008, no matter what you've heard), and he may end up doing quite well. But he pretty much must win New Hampshire. It's next door to his home state, he's the runaway favorite in early polling there, he nearly won it in 2008, and its electorate is more suited to him than that of any key GOP primary state.

The only way a loss in New Hampshire wouldn't immediately put Romney at or near the top of the death watch would be if (somehow) he is edged out by Bachmann. Under that scenario, Romney still might have a chance to rally the GOP establishment around him in a desperate effort to prevent Bachmann from capturing the nomination. This is roughly what happened back in 1996, when Bob Dole lost New Hampshire to Pat Buchanan, at which point a panicked establishment rushed to Dole's side and carried him to the nomination.

(No. 7) Rick Perry: Perry is lower on the list than Romney simply because New Hampshire probably won't be as important to him. It's the South that will feature in any Perry last-stand scenario.

(No. 8) Ron Paul: He will almost certainly occupy the final position on this list for the entire campaign. It doesn't matter how well (or poorly) he does in any specific state; Paul's campaign is really more of a cause. The normal principles of strategy really don't apply.

(Unrankable) Newt Gingrich: It's really impossible to tell what Newt wants out of this campaign. He has no money, no organization and no prospects for victory. One theory holds that he's running to sell books. Another has it that he's simply hoping to do well in debates and recover some of the dignity he has lost in what has so far been an epically humiliating campaign. Who knows how long he'll stick around?