What Standard & Poor's got right

Its unpopular downgrade of U.S. debt sparked a market crash. But the move reflects an unfortunate political reality 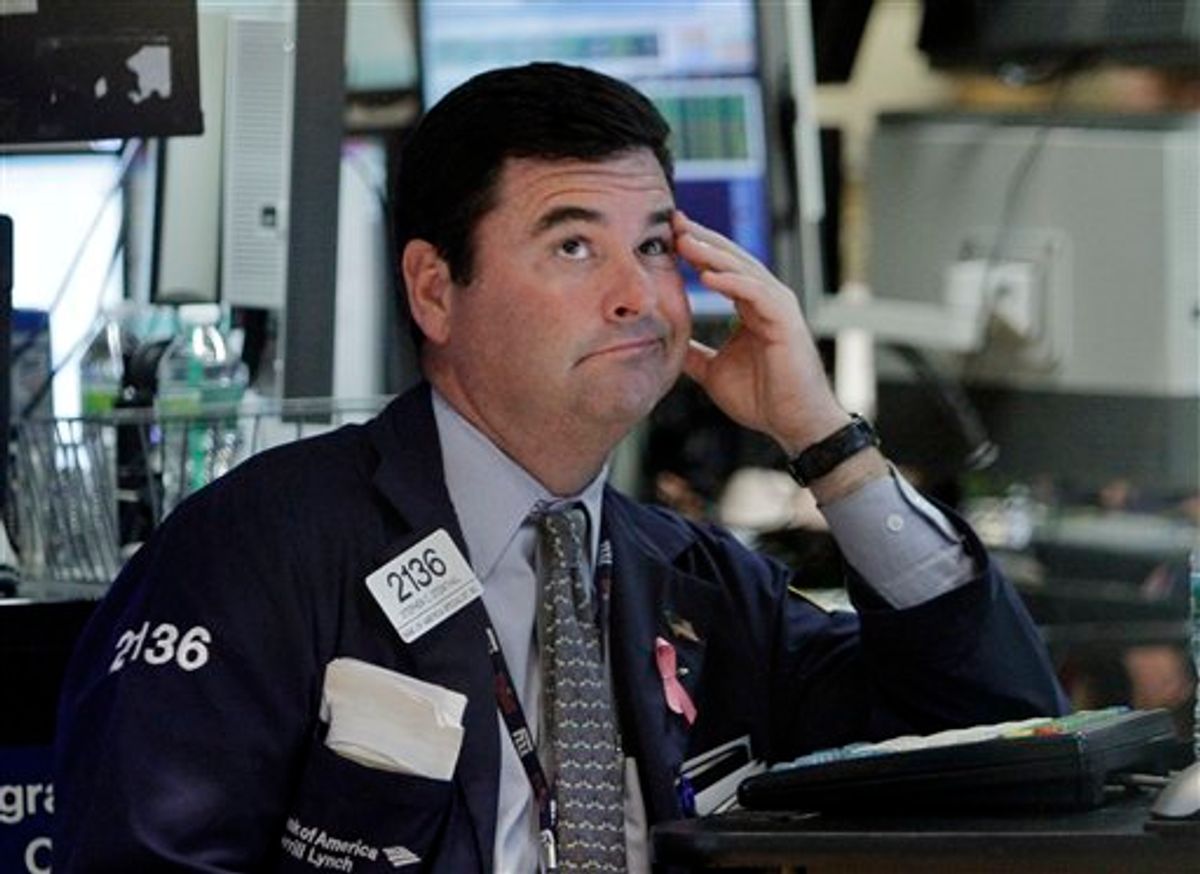 As global markets continue to tank, let's vent some of the angst by listing valid reasons for trashing Standard and Poor's, which downgraded U.S. government debt last Friday, catalyzing the crash.

For starters, there are the many inconsistencies in S&P's work. As an outraged U.S. Treasury Department pointed out, a $2 trillion math error in its downgrade memo failed to change its conclusions.

In 2009, S&P projected that Washington's debt would rise to 90 percent of gross domestic product by 2013, but it still reaffirmed America's AAA status, as Bloomberg has reported. In its Aug. 5 2011 analysis, it foresees America's debt level rising to a more manageable 85 percent of GDP in 2021 -- but this rosier scenario nonetheless somehow warranted a downgrade. Go figure.

And then there's S&P's grievous incompetence in the recent past. The agency rated Iceland's debt a relatively safe A- until the brink of the country's mammoth banking meltdown – the biggest such crisis ever, relative to the size of its economy.

In the U.S., S&P (along with rivals Fitch and Moody's) were "key enablers of the [2008] financial meltdown," according to Congress's Financial Crisis Inquiry Commission. Deploying an inherently corrupt business model, S&P collected fat fees from investment banks in return for perfect ratings on mortgage backed securities that earned the banks a fortune -- until these toxic assets knocked the banks and global economy to the mat.

As Jon Stewart points out, "Who's going to listen to a company whose name translates to 'average and below average'" -- a company that suggests you trust your money with the (AAA rated) Isle of Man before you give it to big, bad Uncle Sam.

There's no doubt that S&P has earned the opprobrium. On the other hand, condemning the messenger is a knee jerk response, especially when the message delivered wipes out trillions in wealth around the globe. Similarly, in recent months European leaders have lashed out at S&P, Fitch and Moody's as the agencies issue downgrade after downgrade on European debt -- some commentators have even hinted at an American conspiracy (all of these firms are U.S.-based) and have floated the idea of a European alternative.

For certain, you can make a strong case that S&P makes massive blunders. But just because they've been wrong, often and dangerously, doesn't mean they're mistaken this time around.

As Michael Hirsh points out in the National Journal, S&P wasn't alone in lowering its rating of U.S. In mid-July, Egan-Jones also downgraded the U.S. one notch, to AA+. Egan-Jones is small and relatively unknown, but its work is arguably of a higher quality: unlike the big three, the firm warned investors about toxic assets before the 2008 financial crisis.

Egan-Jones downgraded U.S. debt because, in its view, a virulently polarized Washington is not capable of tackling the challenge posed by the large and mounting debt. "I don't think the political leaders have a handle on what [the] country is faced with. They still don't understand the underlying factors," Managing Director Sean Egan told Hirsch.

That, in fact, was essentially the same rationale that S&P deployed in downgrading the U.S.

S&P stated that the "effectiveness, stability and predictability of American policymaking and political institutions have weakened" at a critical moment for the economy. The agency added that it was "pessimistic about the capacity of Congress and the administration to be able to leverage [the Aug. 2 debt ceiling agreement] into a broader fiscal consolidation plan that stabilizes the government's debt dynamics any time soon." It added, "the political brinksmanship of recent months highlights what we see as America's governance and policymaking becoming less stable, less effective, and less predictable than what we previously believed."

Let's face it: That conclusion is hard to disagree with if you paid attention to the debt ceiling "debate" on Capitol Hill -- replete with Congressional pizza parties and Tea Party members turning to God for economic analysis.

The U.S. Congress has long harbored a smattering of crackpots. This time around, they're numerous, well organized, and blithely indifferent to mainstream economics. Republican House Speaker John Boehner learned this when forced to accede to a balanced budget amendment, a measure that would be far more economically destructive than the massive debt we already have.

It's important to note that S&P's gripe wasn't with America's ability to pay. There's little doubt that the world's most powerful economy, the custodian of the global reserve currency, can pay its bills. In a serious pinch, the Fed could simply print money to pay America's creditors. This, of course, would produce long-term inflation consequences (essentially making everyone in the country poorer), and it would harm American prestige and credit-worthiness, but it would be less catastrophic than a default.

No, it's not America's accounts that are deficient, it's the country's gravitas that's in doubt. It's Congress' willingness to make good on its obligations that are cause for pause. The message: After years of political insanity in Washington, the world has had enough. We've failed to safeguard our most treasured economic assets: trust, credibility and reason. And it's not hard to understand why. Just imagine if, say, France engaged in the kind of antics that we've seen in Washington lately.

In an interview with CNN, the man responsible for S&P's downgrade, John Chambers, cited the events of August 2, when the country came within 10 hours of insolvency, as an example of the kind of brinksmanship that AAA countries simply don't indulge in.

He also emphasized that Congress this summer has not been debating whether to spend more money; the spending decisions were made in April when Congress adopted the 2011 fiscal year budget (more than six months late). Instead, Congress was debating whether to pay the bills that it had already incurred. Among citizens, that kind of behavior can result in jail time or property seizure. As S&P has concluded, this is political lunacy, pure and simple.

Ironically, there's no excuse for political lunacy in the world we currently live in. Solving America's debt problem is within reach, just as it was under the Clinton administration when the country was actually paying down its obligations. These days, much of the data needed to understand the nation's debt woes is literally at the finger tips of every citizen, in reports such as this one, from the hardworking nerds at the Government Accountability Office -- a widely respected, non-partisan arbiter of federal facts and figures. The report lays out, in plain English, the causes and the size of the debt problem. Read it and you'll learn, for example, that:

Elsewhere on the web, you'll learn that America has one of the rich world's lowest tax rates as a percent of GDP, according to the Organization for Economic Cooperation and Development. Only three upper-income countries – Turkey, Mexico and Chile -- collect less tax revenue. Most collect far more. Germany, whose economy sizzles, collects over 50 percent more than the U.S. Meanwhile, U.S. taxes have dropped significantly, from 29.5 percent in 2000 to an estimated 24 percent in 2009.

When you look at the facts, suddenly, America's fiscal problems don't seem so dire after all -- until you consider the political reality that most Republicans in Congress have signed a pact never to raise any taxes, even if it means destroying the nation's balance sheet in the process.

The problem is, America long ago abandoned its ties to a fact-based reality, in favor of facile and glossy truthiness. Who, after all, would spend a half hour reading a thoughtful document with numbers crunched by geeks when on YouTube, you can watch a Republican strategist's slick video showing Obama withdrawing trillions from an ATM, running up the national debt, never mind the facts?

Who would peruse the government's financial statements when you can watch camera-friendly Congresswoman Michele Bachmann blame Obama for the "Standard and Poor" (sic) downgrade, saying that he "destroyed the credit rating of the United States through his failed economic policies, and his inability to control government spending by raising the debt ceiling." Does Bachmann -- currently a 2012 presidential frontrunner -- understand the implications of her words? Does she understand that failing to increase the debt ceiling would have not only led to a downgrade, but also a default on America's obligations, causing a serious global crisis and making everyone poorer?

Apparently not. Beginning in July, she ran TV ads vowing in no uncertain terms to reject the debt ceiling increase, regardless of the terms. That, even though two months earlier she had voted in favor of trillions in additional deficit spending -- an impossibility without a debt ceiling increase.

There's political lunacy for you. Unfortunately for anyone with savings, S&P and Egan-Jones had a point.