Books to enlighten, and help us remember 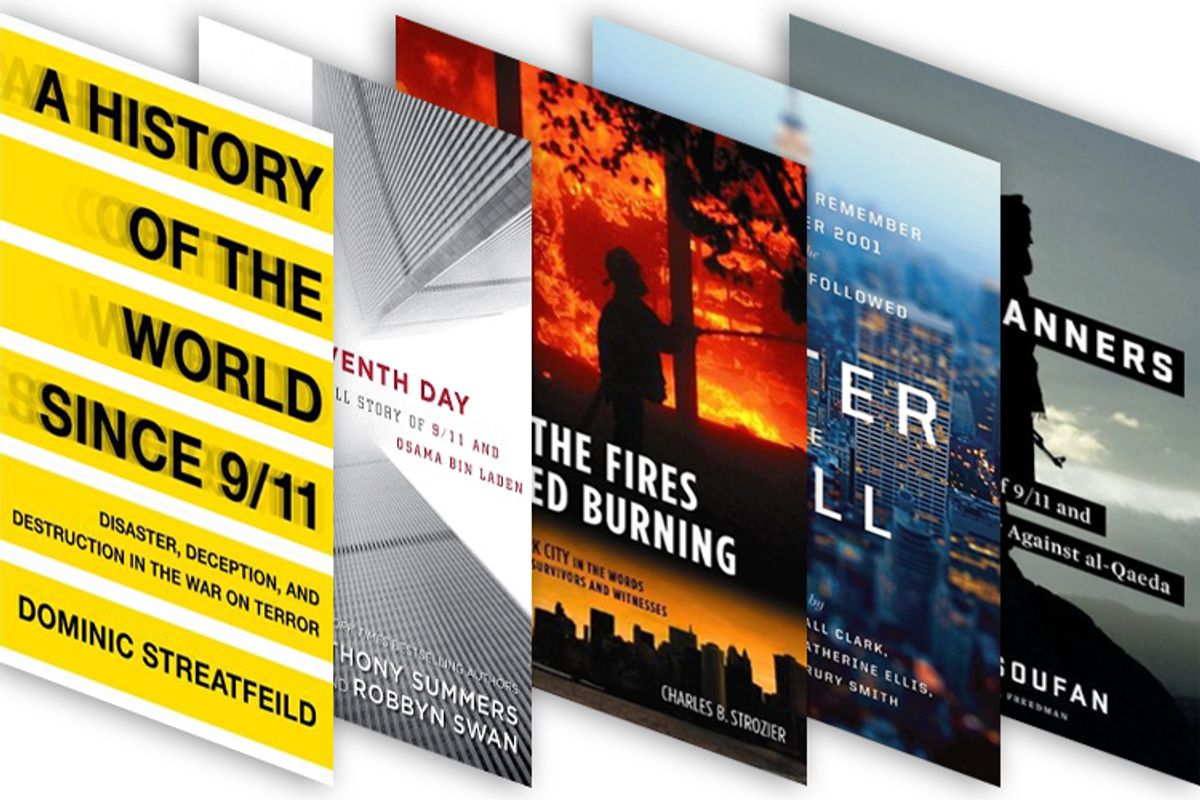 Ten years ago this September, the events of a single day simultaneously shattered our national confidence and awakened our collective compassion. Over the past decade, fears that became familiar in 2001 have hardly receded, as the U.S. and our allies have inaugurated controversial international conflicts -- and continued to confront an ever-diversifying, never-quite-tangible terrorist enemy.

The 10th anniversary of the attacks will be marked by a library of new books, as well as reissues of several essential titles published over the past 10 years. Notable works in the latter category include updated editions of  Jim Dwyer and Kevin Flynn's "102 Minutes," the 9/11 Commission Report, David Friend's "Watching the World Change," and Noam Chomsky's "9/11"; they serve to complement 2011's own explainers, histories and elegies.

Here are five standout new releases to look out for this autumn:

"A guiding premise of the oral history archive is that one learns more 'from traveling through a single land with a thousand pairs of eyes than traveling through a thousand lands with a single pair of eyes,'" write Peter Bearman and Mary Marshall Clark (quoting Proust) in their introduction to this powerful volume based on sources assembled by Columbia University's Oral History Research Office in the wake of the 2001 attacks. The 19 people whose stories are charted here range from artists and street vendors to paramedics, psychotherapists and priests; their collected conversations root the events of 9/11 in the context of their own lives -- and the life of the city itself.

Writing for the New Yorker in 2006, Lawrence Wright described Ali Soufan -- the author of this highly anticipated volume -- as "America's best chance to stop the attacks of September 11th." (Read Wright's full profile -- and explanation of what went wrong in the months and years before the attacks -- here.) This work sees the former FBI special agent give his own uniquely informed, granular take on 9/11 -- and the momentous, long decade that has followed.

This book by husband-and-wife team Anthony Summers and Robbyn Swan seeks to provide a comprehensive and "essential" account, not only of the 9/11 attacks themselves -- their planning and enactment -- but also of the political and historical forces they set in motion. Particularly impressive is the fact that it incorporates the death of bin Laden (which initially "upended" six years of research, as editor Mark Tavani explained to the Associated Press earlier this year).

"Until the Fires Stopped Burning: 9/11 and New York City in the Words and Experiences of Survivors and Witnesses," by Charles B. Strozier (Columbia University Press, Aug. 30)

"The tenth anniversary moves personal loss into historical memory," wrote psychotherapist and professor Charles B. Strozier (who directs the Center of Terrorism at John Jay College of Criminal Justice) on his blog earlier this summer, in a general discussion of the process of dealing with the loss of a loved one. Strozier then compared this personal process to the wider, "collective experience" of remembering 9/11: "After the tenth anniversary, the sense is that we will think differently about 9/11, reflect on it as part of ongoing history, study it more than relive it, a process, needless to say, that is not always welcome by survivors." Strozier's own upcoming work, "Until the Fires Stopped Burning," examines New Yorkers' diverse experiences of 9/11, exploring the geography of the city's grief through interviews and original analysis.

"A History of the World Since 9/11: Disaster, Deception, and Destruction in the War on Terror," by Dominic Streatfeild (Bloomsbury, Aug. 16)

This "crackl[ing]," provocative work -- released in Britain this February -- sees Dominic Streatfeild put eight separate international incidents under his journalistic microscope to craft a troubling mosaic that illustrates "the sleep of reason and good sense in successive U.S. administrations post-9/11."