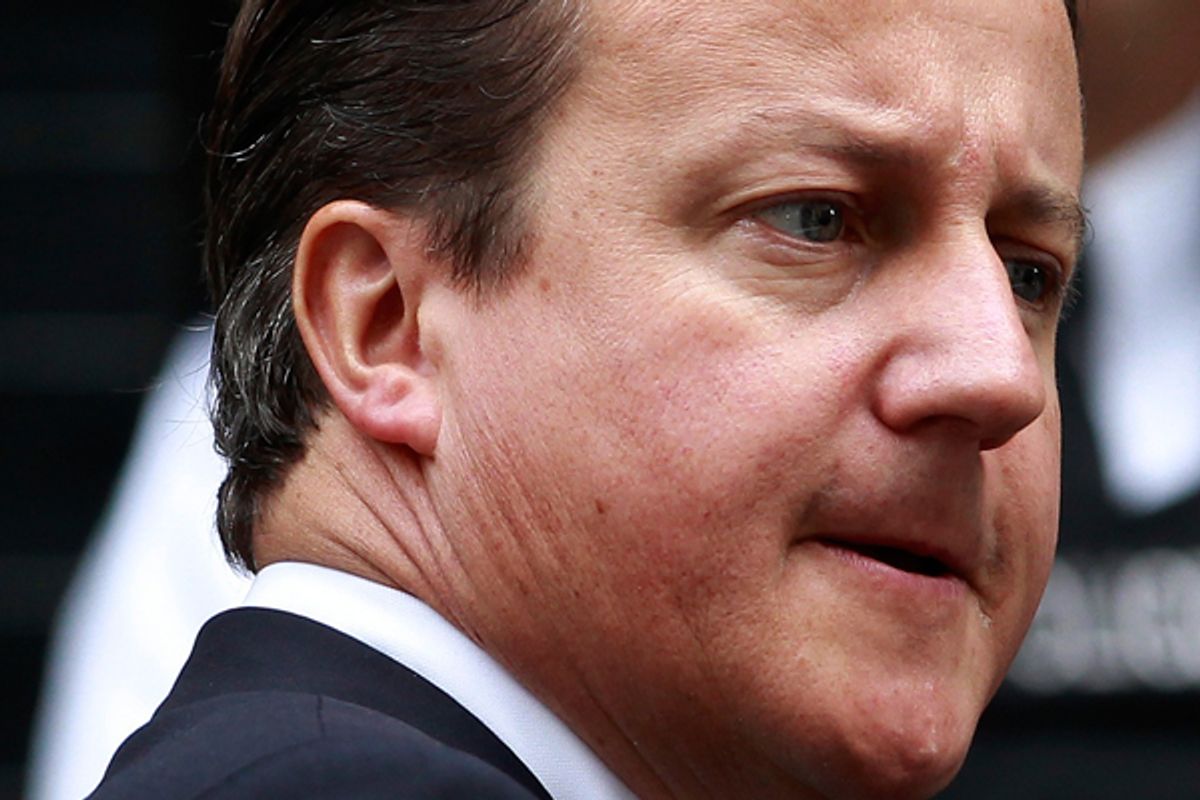 To many looking from the outside, the recent unrest in Britain may have come as something of a surprise. Recent months have seen repeated protests, occupations, strikes and huge trade union marches, but street protests with seemingly no rhyme or reason were surely out of the question. With unfortunate timing, one British commentator, Nick Cohen, wrote a piece earlier this month titled "No riots here. Just quiet, ever-deeper misery," arguing that "the wider public remains resigned rather than enraged; indifferent rather than incandescent." The student protests of November and December last year were limited outbursts, no more, many agreed; the establishment consensus was that most people would grumpily carry on even in the face of huge cuts to public services, massive unemployment and more severe austerity measures to come.

So what did happen in Britain last week? Analysis, or rather refusal to analyze, came thick and fast: This was the work of a mindless criminal underclass, of those who merely wanted expensive new sneakers but didn’t want to pay for them, and so on. The original trigger for the unrest -- the fatal shooting of a black man from a deprived part of London -- was quickly lost in the storm. Although many have tried to keep the backdrop of serious and long-term police racism and harassment as part of the discussion, reasonable voices have been drowned out in favor of an "act now, think later" approach.

Of course, riots in Britain are nothing new, despite our attempt to brand ourselves as the eccentric, deferential land of Harry Potter and grandiose Royal Weddings. Over the last week, many have been reminded of the riots that took place in Brixton and Tottenham in the early to mid-1980s. Have things changed much since then? Some of the context is depressingly familiar -- police brutality and racist harassment, massive unemployment, child poverty, lack of social mobility and blatant economic inequality. Many have been keen to paint the recent disorder as mere criminality, unrelated to any political issues or demands -- except the desire to loot electronic goods. Indeed, over the past 20 years or so, it certainly feels like there has been a moratorium on any alternative narratives or motivations -- conspicuous consumption for those that can afford it, massive debt for those who can’t, but above all the imperative to spend for the sake of an increasingly uncertain economy.

One particular trend that has certainly increased since the unrest of the early 1980s is steady gentrification, and it has had ever-eroding effects on urban life. The inequalities of British cities, where incredibly the rich live side-by-side with the profoundly dispossessed, are the visual marker of a deeper trend: the pushing out from urban environments of anyone without money, anyone who cannot afford to own property, who cannot find a job, or can find only badly paid menial work. When millionaire politicians -- many of whom have themselves been found guilty of stealing taxpayers' money to pay for second homes and expensive consumer goods -- attack people for theft and criminality, they make it clear once again that there is one rule for the rich and powerful and another for the poor.

And now -- the crackdown. In an emergency session of Parliament, Prime Minister David Cameron declared that "we will do whatever it takes to restore law and order." His proposals were unusually concrete: more police on the street, more arrests and more prosecutions. CCTV footage will be used; no "phony human rights concerns" will stand in the way of publishing photographs of supposed offenders. Face-coverings can be removed by police whenever they feel like it, curfews are an option -- "Nothing is off the table," Cameron said. In the run-up to the Olympics next year, the government is "cracking down," just as it has been against students and other protesters in recent months, going so far as to "pre-arrest" many suspected activists in the run-up to the Royal Wedding in April.

As of Friday morning, around 1,600 people have been arrested, with at least 500 charged, many in makeshift overnight courts. The sentences are incredibly harsh -- six months for one student with no previous criminal record for stealing water worth $5.70 (American), four months for an 18-year-old man in Manchester for swearing at the police. The majority of those sentenced so far, according to the Guardian, are "overwhelmingly young, male and unemployed."

The authoritarian response of the British government to the disturbances is a worrying sign of things to come. The only "context" permitted in the public discourse is the old, regressive idea that families, particularly single mothers, are to blame for "lawlessness." This misplaced moralism is a deliberate attempt to avoid addressing the real causes of the unrest -- inequality, poverty, unemployment and a lack of alternative narratives. The immediate future for Britain looks grim: increasing state repression, increased fear and suspicion of the urban poor, increased social divisions along class and racial lines, more blame and punishment and zero understanding. In other words, the very things that created the unrest in the first place.

Nina Power is a lecturer in philosophy at Roehampton University. She is the author of the forthcoming book "One-Dimensional Woman" and the blog Infinite Thought.