Our dog, the Tea Party metaphor 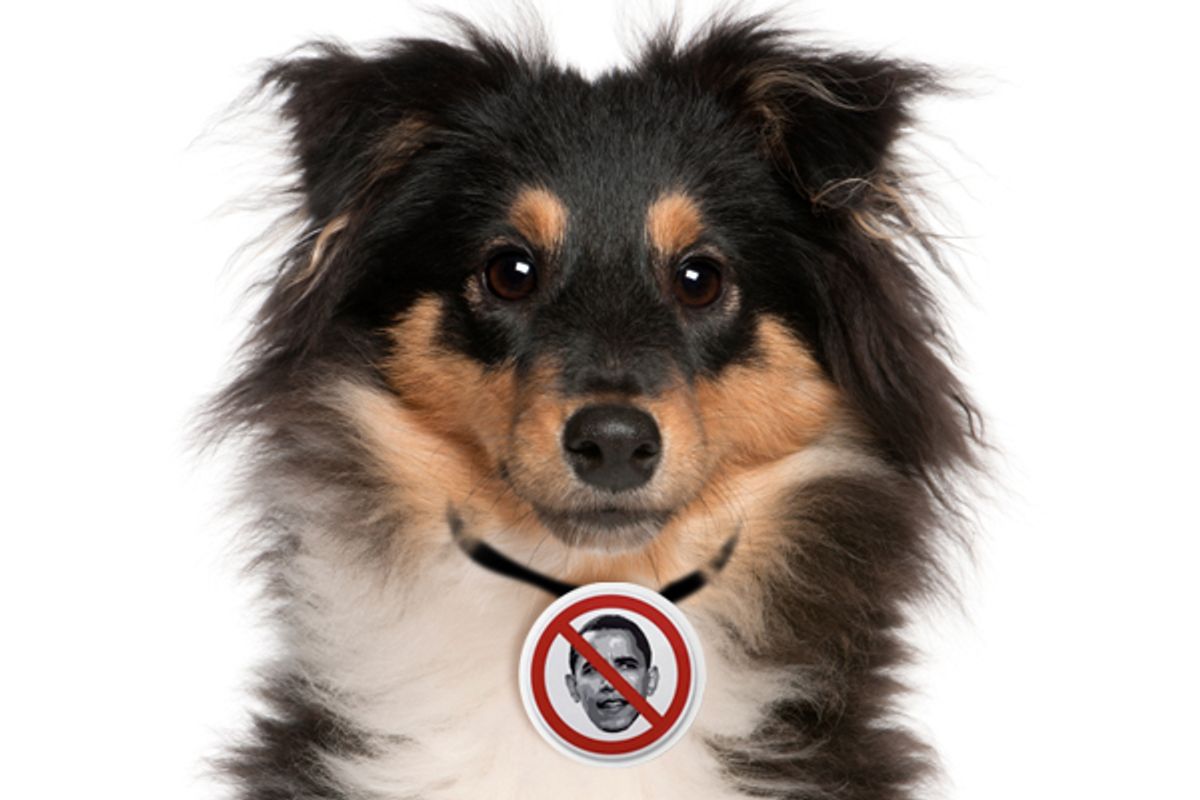 I've been married a little over a year, and my husband Tom's 10-year-old Shetland sheepdog, Bradley (as in the tank), doesn't think I'm a legitimate resident of our little white house. I'm the wrong race (German, not Scottish) as well as the wrong gender, and I get a lot of attention and deference from Tom that I clearly haven't earned.

But, I object, Tom chose me, and it's up to him, isn't it? Besides, I think I've got plenty of credibility as an animal lover. I've been rescuing critters and adopting them and finding homes for them practically since I was allowed outdoors alone; and I know, from the pet establishments I've run as an adult, what pets need. Moreover, I go out of my way for Bradley, walking him in the meadow without a leash (in spite of his slowness to listen to me), giving him extra treats, lobbying for his inclusion in weekend drives, fussing over him, and assuring him that I know he has the best interests of the household at heart and will work with me for the general welfare above all else.

But it doesn't help that our common constituency, Tom, has let the most alienating tasks fall to me: bathing Bradley (who has a couple of skin conditions), administering his pills (he's prone to infections), and enforcing polite behavior toward guests (he's a herding dog, so don't get me started about his control issues). To be fair, my husband has a cogent rationale -- which is that I've got nothing to lose. It's plain that nothing will change the varmint's mind about me anyway.

Once, early on, when Bradley was shrilly voicing his displeasure at my coming along on a walk ("You lie! You lie! You say you belong with us, but you don't!"), I asserted leadership by gently but firmly grasping his snout. He fell silent -- he is an intelligent, outwardly civilized dog who knows when someone else has the upper hand. But he narrowed his eyes at me with the expression a Platinum-Plus shaver would assume if it were alive and you insisted that its role was not to be as sharp and slick as possible in serving the person who purchased it. Yes, Bradley telegraphed, you've been given authority through some sort of wicked conspiracy. But we'll see, won't we?

This Sunday, Bradley began to shake the tags on his collar at 6 a.m., as usual. Most days, Tom undertakes the first promenade, but now I could see he was still fast asleep. I rose stealthily, dressed and took the dog around the meadow, off the leash. Snuff, snuff, sssss, plop-plop, snuff, snuff, sssss snuff, snuff, sssss. I kept him out until he had slowed way down -- the poor codger gets to the end of his resources pretty fast. Back in the house, I patted him and gave him two treats. His water was low, so I replenished it to the brim. I told him I was proud of what we'd achieved on a bipartisan basis, and that I hoped our productive relationship would continue, especially because it would benefit Tom, whom we were both pledged to serve, and who on occasion took quite a lot of crap from both of us.

Then I sat down in the only comfortable chair in the house to read until Tom woke up. I hoped that Bradley would lie in his customary place behind the chair, on his budget-busting, non-washable, non-dry-cleanable hand-woven rug with images of fruit on it in quilt-like squares; or by the sliding door on another such rug, this particular textile sporting (besides, of course, a lot of shed hair and dried drool) a nautical scene surprisingly like a 19th-century oil painting and making an even bigger contribution to some future bank official's frowny face should Tom and I ever apply for a mortgage.

But now Bradley merely stared at me in disgust and headed toward the stairs, shaking his tags.

He came back to the chair, still shaking his tags, and then started toward the stairs again. I was supposed to come with him and get him settled on his non-washable, non-dry-cleanable hand-woven rug with the rooster and flowers on it, in Pennsylvania Dutch style but far pricier here in Connecticut than it would have been in Intercourse, Pa. But he wouldn't stay there (on the rug, that is, not in Intercourse) unless I sneaked back into bed myself. After I was sound asleep, he would quietly rouse the oblivious Tom and go on a second walk. This had happened more than once before.

"No!" I hissed, rejecting this scam. "You claim to love him so much: do what's best for him -- and for you! You're both tired, so lie down here and sleep." I went to the kitchen with him and gave him another treat. He ate it contemptuously and headed up the stairs. Had I tried to stop him, he would have yipped piteously.

I hoped that maybe this time he would sleep up there -- but in five minutes Tom came down fully dressed (though bleary-eyed) with a jubilant Bradley.

"I took him out already!" I protested. "He's just jerking us around."

Tom opened the front door, explaining, "He says you're lying. He hasn't had a walk yet. The mess on the rugs later would be your fault." And walked off with him down to the street and out of sight.