Desperate to prove he has a pulse, he picks a losing fight with Bachmann. Is he trying to make this easy for Mitt? 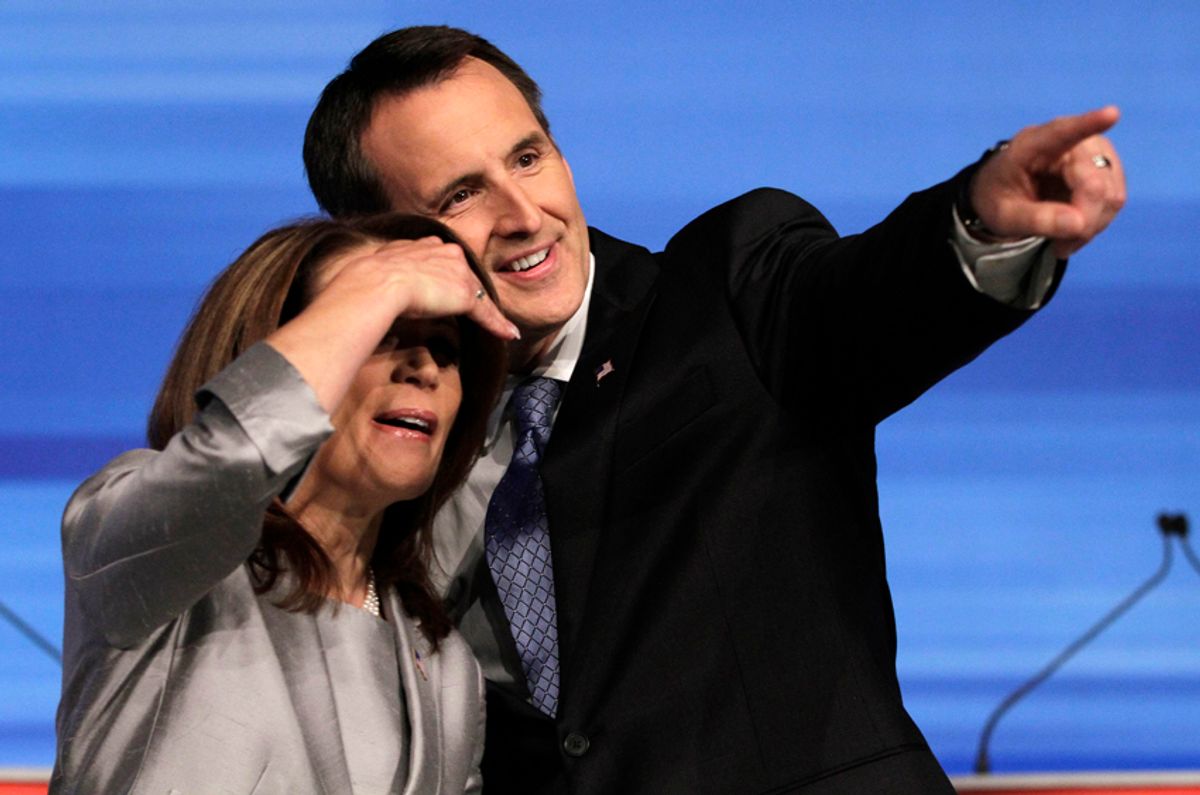 Thursday night’s Republican presidential debate was a desperate moment for Tim Pawlenty -- and boy did it show.

Of the eight candidates onstage, the stakes for the former Minnesota governor were the clearest and most immediate: The future of his candidacy probably depends on winning -- or faring strongly in defeat at -- Saturday’s Iowa straw poll. He's poured more time and money into the event than anyone else, the field is thin because two heavyweight candidates (Mitt Romney and Rick Perry) are ducking it, and he’s shown no life in national or key state polls. So if he can’t break through in Ames, Tim’s time will be up.

Clearly, that reality shaped his approach to the debate. The knock on Pawlenty is that he has no personality and is scared of a fight, a reputation that was only reinforced by his sleepy performance in two previous debates. He showed up Thursday knowing it might be his last chance to demonstrate otherwise.

The problem is that he went about it entirely the wrong way, taking swing after swing at the opponent he could only hurt himself by attacking -- while pretty much leaving alone the one he should have been going after for months now.

The candidate Pawlenty targeted was Michele Bachmann. Very early in the debate, Pawlenty was asked about his recent criticism of her lack of legislative achievements as a member of Congress. This was a virtual repeat of a moment near the beginning of the previous debate, when the moderator brought up criticism that Pawlenty had leveled on the campaign trail against Romney and his healthcare law and challenged Pawlenty to say it to his opponent’s face. Pawlenty couldn’t bring himself to do it, and his stammering, incoherent response only worsened his image problem.

This time, though, he took the bait, offering a few obligatory words of praise for Bachmann before claiming that "it’s an undisputable fact that in Congress her record of accomplishments and results is nonexistent" and arguing that only a candidate with his own experience could campaign effectively against Barack Obama.

Bachmann patiently waited her turn while he spoke, then offered a poised, confident response, noting that Pawlenty's gubernatorial record on issues like cap-and-trade and healthcare "sounds a lot more like Barack Obama, if you ask me."

Her words were strong, but so was her delivery -- she spoke each word firmly and clearly, communicating just enough contempt to get her message across. Pawlenty’s delivery, on the other hand, called to mind a hostage tape, a man saying words that he knows he has to say, but doesn’t really want to or know how to.

And he wouldn’t let it go. When Bachmann finished, he jumped in to say, "It’s not her spine we’re worried about, it’s her lack of results." Then, ticking off a number of issues on which Obama’s agenda passed Congress despite Bachmann’s strong opposition, he told her, "If that’s your record of results, please stop, because you’re killing us." It probably looked good on paper, but it sounded terrible in real life. The main reaction of the live audience (a misleading barometer, I know) consisted of jeers.

It kept up like this for several rounds -- and at more than one juncture in the debate. Meanwhile, Pawlenty virtually left the biggest fish in the room, Romney, alone. He cracked one joke about Romney living in a big house and offered the critique of Romney’s healthcare plan that he’d been too scared to utter the last time around. Romney, wisely, would have none of it, smiling and shrugging off both jabs. ("That's just fine," was his reply when the moderator asked if he wanted to respond to Pawlenty’s house joke, and "I think I liked Tim’s answer in the last debate better" was how he handled the healthcare attack.)

Pawlenty’s strategy, if that’s what this reflected, was completely backward. The fight he picked with Bachmann was virtually guaranteed to be a losing one. Most likely, Pawlenty felt the need to go after Bachmann because, on paper, she’s his biggest threat at Saturday’s straw poll; both of them are vying for first place. But the conservative activists -- in Iowa and elsewhere -- who are most likely to be attracted to Bachmann are very unlikely to be persuaded by aggressive attacks on her by Tim Pawlenty. They like Bachmann personally, love what she stands for, and have no doubt that she’s one of their own. They may have doubts about her electability, but by blatantly trying to stoke those doubts, Pawlenty only makes it easier for them to view him as a calculating sellout Republican politician.

A much riper target for Pawlenty would have been -- and always has been -- Romney. Unlike Bachmann, the base has profound doubts about Romney’s commitment to their cause. By aggressively pressing Romney on his (many) vulnerabilities, Pawlenty would have stood to a) weaken the front-runner, a man whose role (consensus establishment choice, at least for now) he wants for himself; b) establish his own purist bona fides with the base; and c) shake off the boring/lifeless image. Sure, Romney isn’t contesting the straw poll, but this still could have helped Pawlenty, simply by making him a stronger all-around candidate. And it would have carried none of the downside that comes with attacking Bachmann.

It’s still possible that Pawlenty will do well enough on Saturday to survive -- for a while. But even if he does, so what? He's just not a good candidate.