Iraq foots the bill for its own destruction 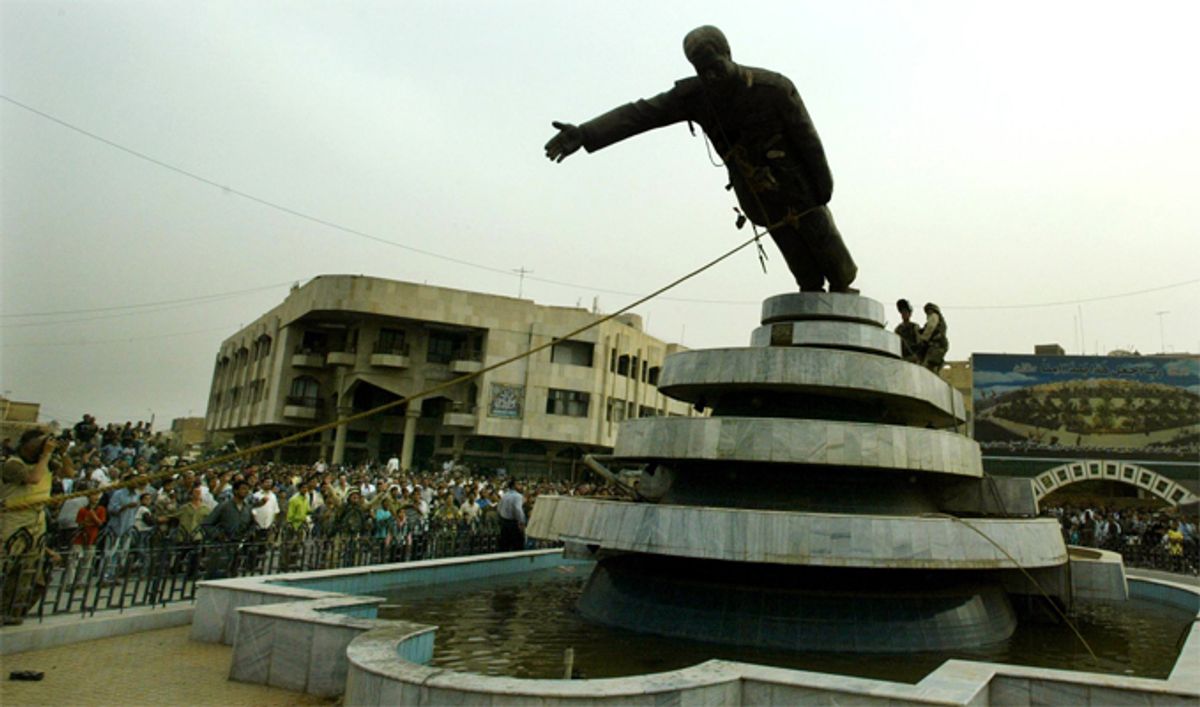 Iraqi citizens pull down a statue of Iraqi President Saddam Hussein in April, 2003.
--

When considering the premise of reparation being paid for the Iraq War it would be natural to assume that the party to whom such payments would be made would be the Iraqi civilian population, the ordinary people who suffered the brunt of the devastation from the fighting. Fought on the false pretence of capturing Saddam Hussein’s nonexistent weapons of mass destruction, the war resulted in massive indiscriminate suffering for Iraqi civilians which continues to this day. Estimates of the number of dead and wounded range from the hundreds of thousands into the millions, and additional millions of refugees remain been forcibly separated from their homes, livelihoods and families. Billions of dollars in reparations are indeed being paid for the Iraq War, but not to Iraqis who lost loved ones or property as a result of the conflict, and who, despite their nation’s oil wealth, are still suffering the effects of an utterly destroyed economy. "Reparations payments" are being made by Iraq to Americans and others for the suffering which those parties experienced as a result of the past two decades of conflict with Iraq.

Iraq today is a shattered society still picking up the pieces after decades of war and crippling sanctions. Prior to its conflict with the United States, the Iraqi healthcare and education systems were the envy of the Middle East, and despite the brutalities and crimes of the Ba’ath regime there still managed to exist a thriving middle class of ordinary Iraqis, something conspicuously absent from today’s "free Iraq." In light of the continued suffering of Iraqi civilians, the agreement by the al-Maliki government to pay enormous sums of money to the people who destroyed the country is unconscionable and further discredits the absurd claim that the invasion was fought to "liberate" the Iraqi people.

In addition to making hundreds of millions of dollars in reparation payments to the United States, Iraq has been paying similarly huge sums to corporations whose business suffered as a result of the actions of Saddam Hussein. While millions of ordinary Iraqis continue to lack even reliable access to drinking water, their free and representative government has been paying damages to corporations such as Pepsi, Philip Morris and Sheraton; ostensibly for the terrible hardships their shareholders endured due to the disruption in the business environment resulting from the Gulf War. When viewed against the backdrop of massive privatization of Iraqi natural resources, the image that takes shape is that of corporate pillaging of a destroyed country made possible by military force.

Despite the billions of dollars already paid in damages to foreign countries and corporations additional billions are still being sought and are directly threatening funds set aside for the rebuilding of the country; something which 8 years after the invasion has yet to occur for the vast majority of Iraqis. While politicians and media figures in the U.S. make provocative calls for Iraq to "pay back" the United States for the costs incurred in giving Iraq the beautiful gift of democracy, it is worth noting that Iraq is indeed already being pillaged of its resources to the detriment of its long suffering civilian population.

The perverse notion that an utterly destroyed country must pay reparations to the parties who maliciously planned and facilitated its destruction is the grim reality today for the people Iraq. That there are those who actually bemoan the lack of Iraqi gratitude for the invasion of their country and who still cling to the pathetic notion that the unfathomable devastation they unleashed upon Iraqi civilians was some sort of "liberation" speaks powerfully to the capacity for human self-delusion. The systematic destruction and pillaging of Iraq is a war crime for which none of its perpetrators have yet been held to account (though history often takes[though history often takes time to be fully written] time to be fully written), and of which the extraction of reparation payments is but one component.