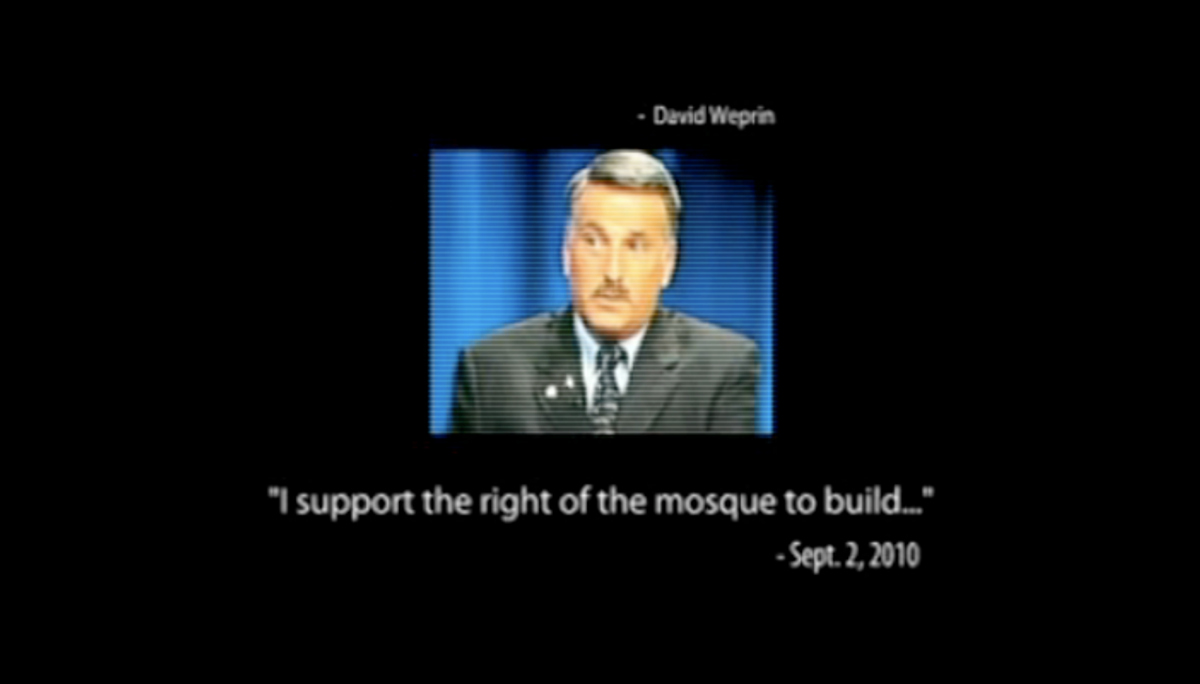 In the special election to fill Anthony Weiner's vacant New York congressional seat, the Republican candidate, Bob Turner, is out with a new ad attacking Democrat David Weprin on the "ground zero mosque" -- a full year after the controversy over that project. Watch:

It’s been ten short years. Everyone remembers. Some, though, want to commemorate the tragedy by building a mosque on Ground Zero. President Obama thinks that’s a good idea. And so does Congressional candidate David Weprin.

[Weprin video: "I support the right of the mosque to build."]

Bob Turner says no. He knows Obama and Weprin are wrong. September 13th, send a message.

Put aside the outright falsehood in the ad (the proposed Islamic center is not "on" Ground Zero, but blocks away), and focus on a more interesting question: Why is the Turner campaign harping on such an old issue at this particular moment? Even Park51's developer recently acknowledged that the project -- a generous term, as it's more of an idea at this point -- is at least five years away from any sort of construction; in real world terms, that means it may well never be built.

The real explanation for the ad can be found in the demographics of the district and the dynamic of the Turner-Weprin race up to this point.

According to a recent Siena poll, 29 percent of likely voters in the Brooklyn/Queens-based 9th District, are Jewish. Turnout is always low in special elections, and that means the sizable and tight-knit Orthodox Jewish community has been a "high-value target of both campaigns," WNYC recently reported.

Much of the campaign up to this point has been about Israel, with Weprin scrambling to assure voters that he opposes President Obama's perceived slights against the Jewish state ('67 borders, etc.) just as strenuously as Turner. Weprin, for example, has publicly called Obama’s treatment of Benjamin Netanyahu "outrageous." But his campaign was dealt a blow when former Mayor Ed Koch endorsed Turner, arguing that electing a Republican from New York City would constitute a strong message to Obama about his Israel policies.

Turner’s message seems to be getting traction. A Siena poll this week showed him trailing Weprin by just six points -- this in a district where enrolled Democrats outnumber Republicans by 3-1. The poll also showed Weprin winning likely Jewish voters by a 56-35 percent margin. But that’s significantly less than the 78 percent of Jewish voters who cast their ballots for Barack Obama in 2008.

Turner’s new ad is clearly designed to reach Jewish voters who are suspicious of both Obama and -- the campaign is hoping -- Muslims. When I asked Turner campaign spokesman Bill O’Reilly why it had chosen to bring up the mosque now, his response was telling. After mentioning that Park51 is in the news again (there was a Times article checking in on the project a year after the controversy), he portrayed Weprin’s support for the right to build the mosque as part and parcel of a "worldview" that is also insufficiently supportive of Israel:

The Mosque is back in the news. It's being newly financed. …

But more importantly, we think it provides voters with a clear look at the striking difference in world views between the two candidates. This is just one example of that outlook.

For example, Bob Turner has been calling on Congress for weeks to halt US taxpayer funding of the Palestinian Authority until they stop paying Palestinian terrorists in Israeli prisons -- and until the rocket attacks stop. Mr. Weprin has repeatedly refused to take a stand on that.

The Weprin campaign’s response to the Turner ad is equally telling. Rather than reiterate the civil right of Muslim Americans to build mosques where they please, Weprin's statement avoids the issue entirely:

As we approach the tenth anniversary of 9/11, it's shameful that Bob Turner is trying to use the tragedy for his own political gain. I knew people who lost their lives that day and Bob Turner dishonors their memory by politicizing the attacks on New York.

I asked Weprin’s spokesman yesterday whether the candidate still supports the right to build the mosque, and I haven’t heard back.

Will Turner’s gambit work? The election is Sept. 13, so stay tuned …

UPDATE: Weprin's spokeswoman emails that his "position has not changed" on Park51.