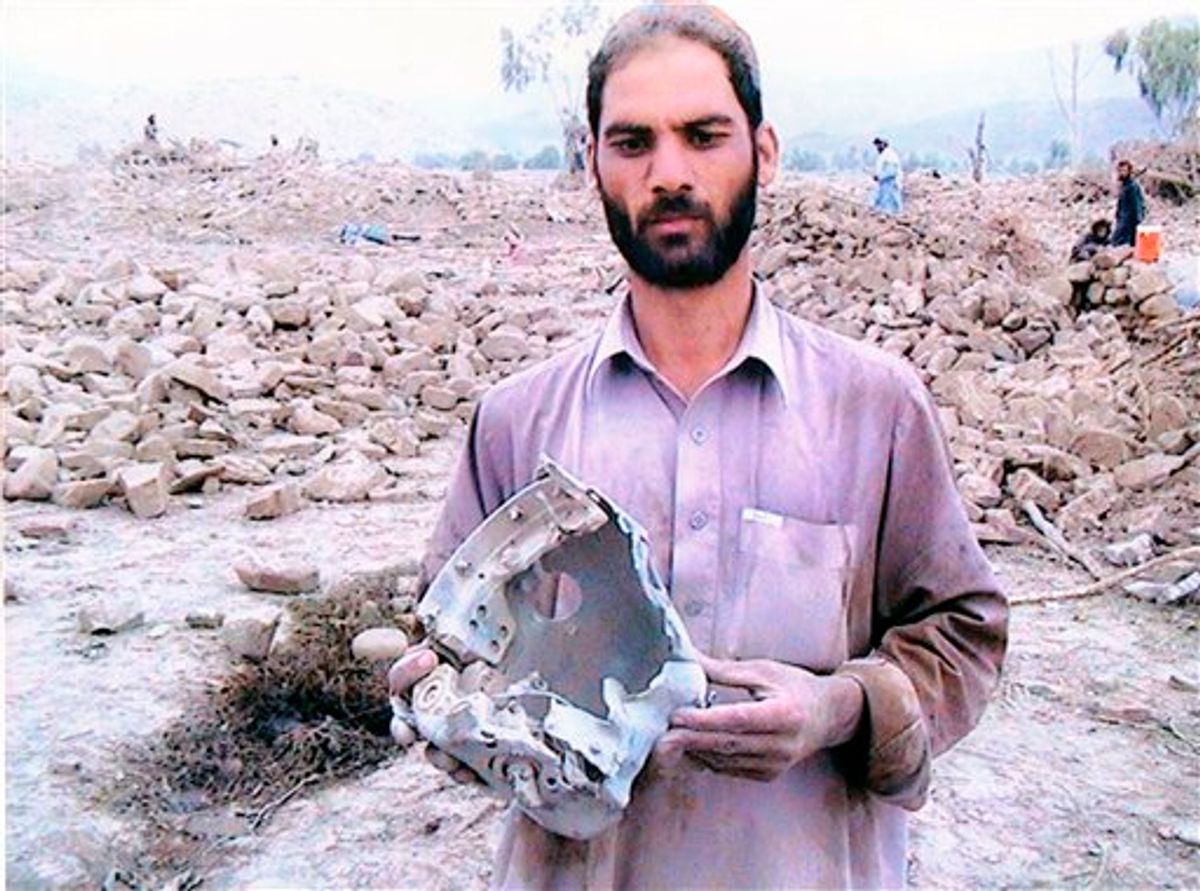 In this Aug. 23, 2010 photo provided by photographer Noor Behram, a man holds debris from a missile strike in North Waziristan, Pakistan. A gallery in London is staging an exhibit of photographs taken by a Pakistani photographer allegedly showing innocent civilians killed by U.S. drone missile strikes in Pakistan's tribal region along the Afghan border, the organizers said Monday. Noor Behram, a 39-year-old photographer who has worked with several international news agencies, has spent the last three years photographing the aftermath of drone strikes in North and South Waziristan, important sanctuaries for al-Qaida and Taliban militants in Pakistan. He said he has managed to reach around 60 attack sites, and the exhibit that opens Tuesday at the Beaconsfield gallery in London features photographs from 28 of those strikes. (AP Photo/Noor Behram,HO) (AP)
--

Based on international and Pakistani news reports and research on the ground, the London-based Bureau of Investigative Journalism has issued a new study on civilians killed by American drones, concluding that at least 385 civilians have been killed in the past seven years, including at least 168 children.

Here's a taste of the report, which can be read in full here (warning: graphic images):

Pakistani father Din Mohammad had the misfortune to live next door to militants in Danda Darpakhel, North Waziristan. His neighbours were reportedly part of the Haqqani Network, a group fighting US forces in nearby Afghanistan.

One of the Hellfires missed its target, and Din Mohammad’s house was hit. He survived. But his son, his two daughters and his nephew all died. His eldest boy had been a student at a Waziristan military cadet college. The other three children were all below school age.

An Obama administration official told ABC that these numbers are "way off the mark" -- but, tellingly, did so on the condition of anonymity, meaning he or she will be protected from any accountability.

Meanwhile, the New York Times' Scott Shane has an important article reviewing the same issue and in particular Obama counterterrorism adviser John Brennan's claim in June that for the previous year CIA drone strikes hadn't caused "a single collateral death because of the exceptional proficiency, precision of the capabilities we’ve been able to develop." Shane finds that basically every outside observer -- including those of all ideological stripes -- finds this claim to be preposterous:

Others who question the C.I.A. claim include strong supporters of the drone program like Bill Roggio, editor of The Long War Journal, who closely tracks the strikes.

Brennan issued a new statement to the Times suggesting that the CIA has merely "not found credible evidence of collateral deaths" from the drone strikes:

“Fortunately, for more than a year, due to our discretion and precision, the U.S. government has not found credible evidence of collateral deaths resulting from U.S. counterterrorism operations outside of Afghanistan or Iraq, and we will continue to do our best to keep it that way,” Mr. Brennan said.

Given that the drones are operated remotely, it's far from clear how the CIA even knows who is being killed in many of these strikes.