Big Business has been very, very good to Mitt Romney 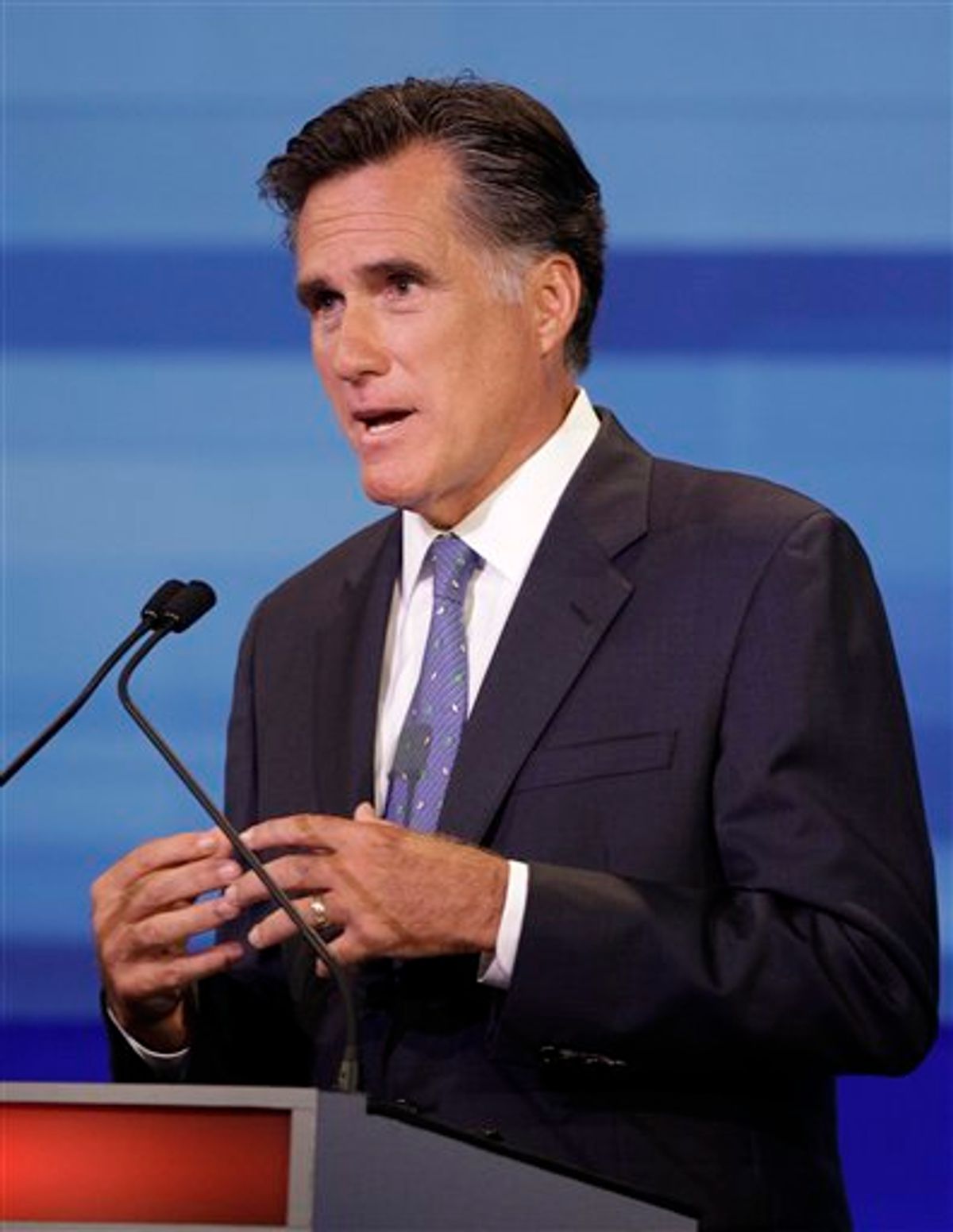 As the noted philosopher and rock 'n' roll irritant David Lee Roth once said, "Money can't buy you happiness, but it can buy you a yacht big enough to pull up right alongside it."

I often think of his sage words as I watch the early days of the 2012 political campaigns. For the phrase "buy you a yacht," simply substitute "buy you an election." Then behold the havoc wrought by Citizens United and other court decisions that have unleashed a mudslide of corporate cash into our electoral system, much of it anonymous, hurling the average citizen out of the democratic equation.

An estimated $40 million will be spent in those nine Wisconsin state Senate recall elections -- most of it from outside, third-party interest groups and twice what was spent last year on all 116 of the state’s legislative races. Most believe President Obama will raise a billion dollars or even more for his reelection bid; enough, as NPR’s Peter Overby observed, to buy up all the TV ads on the Super Bowl -- four times.

The Republican nominee may also raise and spend a billion. If it turns out to be former Massachusetts Gov. Mitt Romney, buying that electoral yacht will be a tad easier than for others. Back in 2007, the New York Times estimated his worth at nearly $350 million, and he plowed a reported $44.5 million of his own money into his 2008 presidential campaign.

Certainly, there has been a deep strain of noblesse oblige throughout the history of American governance, the wealthy feeling the urge (and having the disposable income and free time) to come to the aid of their country, both for good and ill. But with Romney, so much a complaisant creature of the corporate culture that dropped us into our current mess without a parachute, we have a tsunami-in-waiting.

As he scurries to the right, running away from his moderate record as Massachusetts governor (although there’s no escaping the irony of this week’s reports that the state’s upgrade to an AA rating from Standard & Poor’s during his tenure was achieved, in part, through tax hikes), it’s illuminating to remember not only how Romney amassed his personal fortune but also how the fundraising apparatus surrounding him probes for yet more ways to scam the system. Not content with the freewheeling liberties already granted by the courts, his money machine relentlessly pursues ever more insidious routes to the fattest wallets and checkbooks.

The opening chapters may be familiar to you. As a June 2007 article in the Times reported, Romney’s personal fortune was amassed from his leadership at the private equity firm Bain Capital. "Mr. Romney's Bain career -- a source of money and contacts that he has used to finance his Massachusetts campaigns and to leap ahead of his presidential rivals in early fund-raising ... exposes him to criticism that he enriched himself excessively, sometimes by cutting jobs to increase profits." The newspaper quoted Boston University business professor James E. Post: "Increasingly, this world of private equity looks like a world of robber barons, and Romney comes out of that world."

A similar article that same month and year in the Boston Globe noted that Bain Capital specialized in leveraged buyouts and cited MIT Sloan School of Management professor Howard Anderson. Bain, he said, would do "everything they can" to increase the value of the companies it bought. "The promise [to investors] is to make as much money as possible. You don’t say we’re going to make as much money as possible without going offshore and laying off people."

Stephen Colbert may have summed it up best:

"Mitt Romney knows just how to trim the fat. He rescued businesses like Dade Behring, Stage Stories, American Pad and Paper, and GS Industries, then his company sold them for a profit of $578 million after which all of those firms declared bankruptcy. Which sounds bad, but don’t worry, almost no one worked there anymore."

Another of the companies sucked into Bain’s gravitational pull was the medical testing firm Damon Corp. that, according to the Globe,

"later pleaded guilty to defrauding the federal government of $25 million and paid a record $119 million fine.

"Romney sat on Damon’s board. During Romney’s tenure, Damon executives submitted bills to the government for millions of unnecessary blood tests. Romney and other board members were never implicated… But court records suggest that the Damon executives’ scheme continued throughout Bain’s ownership… Bain, meanwhile, tripled its investment. Romney personally reaped $473,000."

But unlike the companies it bought, at Bain itself, even failure could be rewarded -- even if your name was Mitt. Take a look at the sweetheart deal Romney got when he took over Bain Capital, a spinoff of consulting firm Bain & Company where he had been an executive. In an arrangement any start-up enterpriser would kill for, as per the Globe, founder Bill Bain guaranteed that if the Bain Capital experiment tanked, "Romney would get his old job and salary back, plus any raises handed out during his absence." What’s more, if he proved unfit for the task, "Bain agreed to craft a cover story if necessary, promising to bring Romney back to the consulting firm and explain Romney’s return as a matter of his being more valuable to Bain as a consultant."

Yes, corporate people power has served Romney well, especially when it comes to political fundraising. As Huffington Post reported this week, "According to disclosure reports filed at the end of July, 61 registered lobbyists and five lobbyist-linked political action committees contributed $137,650 to Romney's campaign between Jan. 1 and June 30, 2011. The former Massachusetts governor raised more money from lobbyists during this period than all of his competitors combined … Craig Holman, legislative representative for the watchdog group Public Citizen, told HuffPost that Romney's lead in lobbyist cash ‘strongly suggests that Romney is the favored candidate for wealthy special interest groups, especially K Street. They clearly think that they can get their foot in the door with Mitt Romney.’"

"The largest corporate sources of money for Romney are mostly finance industry leaders, including Morgan Stanley and Bank of America. Goldman Sachs employees have given nearly a quarter of a million dollars in contributions… The keys to his success appear to be large donors and contributors from the New York area. Nearly three-quarters of Romney’s money came from donors giving the maximum $2,500 contribution, and one in eight of Romney’s donors live in New York City and its suburbs."

Of the $18 million raised by his campaign in the second quarter this year, one million came from a single trip to New York in May, including a University Club event crammed to its poshly appointed walls with banking executives.

So it’s not surprising that in the Romney camp, the creative accounting techniques perfected by Wall Street are a specialty. It was again The Boston Globe -- which seems to have covered Romney’s political ambitions since they first danced in his head -- that wrote back on April 15, "The former Massachusetts governor has become a master of a controversial but legal fund-raising technique that relies on a network of loosely regulated state political action committees to collect those funds."

Example: Four members of the Marriott hotel family, close friends with the Romneys and fellow Mormons, wrote checks totaling $215,000 to Romney’s campaign, far more than an individual is allowed to give to federal political committees. According to the Globe:

"Romney, more fully exploiting the system he employed in the 2008 election cycle, got around those restrictions by taking in contributions through political committees set up under the rules of individual states. Most of the money was then transferred to Romney’s federal political action committee, Free and Strong America, and used to pay the salaries of top aides, political consultants, and traveling expenses."

Consider, too, the super PAC Restore Our Future, supposedly independent, but run by former Romney political aides in support of their man’s candidacy. Restore Our Future raised $12.2 million in the first half of 2012. Under the new, relaxed rules it can raise unlimited funds but must disclose who contributes and cannot legally coordinate with the candidates themselves or the candidates’ official campaign committees. Of Restore Our Future’s 90 wealthy donors so far, the ubiquitous Marriotts among them, four gave a million dollars apiece. One was John Paulson, described by the website Politico as "a New York hedge fund billionaire who became famous for enriching himself by betting on the collapse of the housing industry."

The other three allegedly are corporations but none of them conduct any real business. Two, Eli Publishing and something called F8 LLC, each list the same Provo, Utah, address as trusts set up by the families of two executives at the anti-aging product company Nu Skin Enterprises. Nu Skin founders and fellow Mormons Stephen Lund and Blake Roney were big contributors to Romney’s first White House campaign in 2008. (For what it’s worth, twice in the '90s, Nu Skin was hauled before the Federal Trade Commission and paid a total of $2.5 million to settle allegations of unsubstantiated product claims.)

The other shell company, W Spann LLC, was even more mysterious. As first reported by Michael Isikoff of NBC News, it was dissolved only months after it was created, and just two weeks before Restore Our Future reported the company’s donation. As Isikoff wrote, "Campaign finance experts say the use of an opaque company like W Spann to donate large sums of money into a political campaign shows how post-Watergate disclosure laws are now being increasingly circumvented."

After days of media demands and questions, the man behind W Spann finally came forward: Edward Conard, a retired managing director of -- surprise -- Bain Capital. But he only stepped up after the groups Democracy 21 and the Campaign Legal Center requested investigations by the Justice Department and the Federal Elections Commission. He made his donation "after consulting prominent legal counsel regarding the transaction," Conard said, "and based on my understanding that the contribution would comply with applicable laws."

Phony businesses set up for the sole purpose of laundering campaign money and shielding who’s really behind massive contributions? The donors responsible for the dummy corporations all say they have nothing to hide. So why hide it? Maybe to keep their distance, because Restore Our Future could be planning attack ads on Republican rivals and President Obama that will be harsher and more truth bending than anything Romney and his nearest and dearest can officially support.

We need to discover this and other answers before the money machine completely supplants the voting machine, and any last chance to have our voices heard is permanently stilled by cold hard cash.