How to bring an author back from the dead

Two new books try to revive interest in Joseph Heller. But when trying to reenter the canon, timing is everything 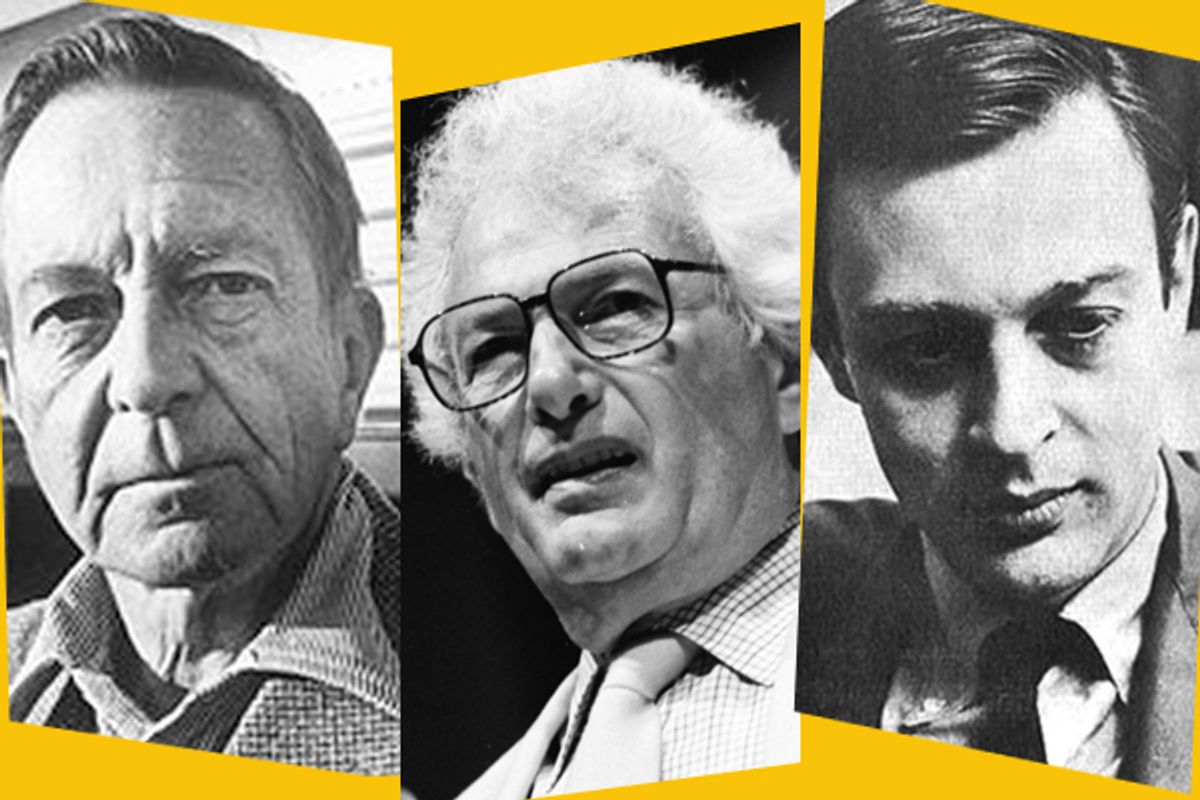 Erica Heller tells a lovely story about her father Joseph's delight in the success of his first book, the novel "Catch-22." As she recalls in her new memoir, "Yossarian Slept Here: When Joseph Heller Was Dad, the Apthorp Was Home, and Life Was a Catch-22" (Simon & Schuster), "When 'Catch' was finally taking off, about a year after publication, my parents ... would often jump into a cab late at night and ride around to the city's leading bookstores in order to see the jaunty riot of red, white and blue and the crooked little man -- the covers of 'the book,' piled up in towers and pyramids, stacked in so many store windows." Typically, she writes, this left Joseph and Shirley Heller feeling "giddy."

Heller remained proud of the novel that many readers and critics consider his masterwork, but his debut was both a "curse and a blessing," said Tracy Daugherty, the author of the recently published "Just One Catch: A Biography of Joseph Heller" (St. Martin's). "By the end of his life his reputation had declined quite a bit, although 'Catch-22' was still selling thousands of copies a year," Daugherty said. "He was disappointed, I think, that he was expected to write that same book over and over."

But even books hailed as classics don't last forever. With "Catch-22's" 50th anniversary just around the corner -- one of the most famous novels to emerge from World War II, it was published on Oct. 10, 1961 -- and a pair of new books about the author's life, Heller is enjoying a rare shot at a renaissance. In the New York Times last week, critic Janet Maslin even urged readers to return to Heller's lesser-known but deeply admired "Something Happened." However, in an era of short attention spans, let alone such great flux in the publishing world, bumping an author up a few notches in the canon -- and seeing that he stays there -- requires equal amounts of luck and intellectual heavy lifting.

The big biography, such as Daugherty's "Just One Catch," is often seen as the central element in revitalizing a literary reputation. But that comes with a big catch of its own. As Blake Bailey, the author of critically praised books about Richard Yates and John Cheever, drolly put it in a recent interview, "There is a deplorable lack of demand for cinderblock-sized literary biographies in the current market."

Bailey's experience with his two biographies is a case study in the unpredictable nature of literary reputation. In the late 1990s, as Bailey was just beginning his proposal for "A Tragic Honesty: The Life and Work of Richard Yates," a confluence of events had jump-started the long and unpredictable process of bringing a writer from out-of-print back into the literary conversation. At the tail end of 1999, novelist Stewart O'Nan wrote an admiring essay about Yates in the Boston Review, and in 2001 Yates' "Revolutionary Road" (with a new introduction by Richard Ford) and his "Collected Stories" were reissued in handsome new editions.

"By the time my biography came out" in 2003, Bailey said, "it was timely. Which is not to say it was a huge commercial success -- but it did get a fair amount of critical attention." Indeed, the book was a finalist for a National Book Critics Circle Award; it helped secure Bailey a Guggenheim fellowship; and it's considered one of the best works of literary biography of the past decade. And yet "A Tragic Honesty" has sold a surprisingly paltry total of about 6,500 copies, Bailey said.

And as "Revolutionary Road" seeped back into the culture, it caught Hollywood's attention once again. This time, with Leonardo DiCaprio, Kate Winslet and director Sam Mendes attached, the oft-optioned film was finally made -- and Random House sold close to 2 million copies of the paperback, said Russell Perreault, the vice president and director of publicity at Random House. Yates made the best-seller list and his ascension into the canon was complete. "Finally, the great novel was discovered by everybody," Perreault said.

Bailey's Yates biography found a big fan in the writer Benjamin Cheever, who put forth the idea of a Bailey-penned bio of his father, Pulitzer Prize-winner John Cheever (like Yates, deeply associated with the postwar suburbs of New York). Published in 2009, "Cheever: A Life" won several prizes, and to date it has sold more than three times as many copies as Bailey's Yates book. Nevertheless, despite handsome Library of America editions of Cheever's work -- and earlier paperback reissues of his Wapshot novels with new introductions by Dave Eggers and Rick Moody -- Bailey's biography didn't spark the resurgence he'd hoped for his subject.

"I don't know that Cheever is selling any more copies of his fiction than he was before," Bailey said, with a sigh. "Alas, alas, because Cheever certainly deserves the biggest possible following. So in many ways my Yates book, which sold a fraction of what my Cheever book sold, was a little more successful in leading to a rediscovery of Yates' fiction than my book was vis-à-vis Cheever's fiction. Go figure."

In similar fashion, supporters of novelist Henry Roth tried to engineer a revival of the author's work, which includes the 1934 coming-of-age classic "Call It Sleep." About a year after he was buttonholed by two guardians of Roth's reputation at an industry awards dinner, Steven G. Kellman, a scholar who had previously published an essay about Roth's work, agreed to write a biography of the largely forgotten novelist. Though the cause had some momentum -- several of Roth's books were reissued after his death in 1995 -- Kellman's "Redemption: The Life of Henry Roth," which was published in 2005, didn't elevate Roth into the canon as some had hoped.

"I don't have the exact figures, but it did not do very well," Kellman said by phone. "Not well enough for Norton to decide to bring it out in paperback." He added, "Norton probably was disappointed, and my editor, Bob Weil, who was also Henry Roth's editor, I think, took a personal interest in this more so than with most of his projects. I think that they could have done more in terms of marketing, but that's water under the bridge."

Since the big biography brings unpredictable results for a significant investment, publishers need other creative ways to reignite interest in even legendary names. When Vintage repackaged and rereleased Raymond Chandler's back catalog, it sought Chandler fans among other writers on the press. It found fans not only among folks like Jonathan Lethem -- often eager to spread the word about writers he admires, including on reissues of work by Paula Fox and Philip K. Dick -- but also from writers not associated with detective fiction at all, like Pico Iyer and Richard Russo. Vintage also worked with Turner Classic Movies on a marathon of films based on Chandler's books, or for which he had written the screenplay.

But as evidence that literary reputation is an unpredictable creature, consider Ecco Press founder Daniel Halpern's experience with a once-anonymous novelist. "When we were at the old Ecco, before we went to HarperCollins," Halpern said, "we printed an author who had never been published in paperback. He was published in hardcover by Random House, and he sold very few copies. I read his first book and just fell in love with it, so we decided to do all of his books up to the time that he broke out in paperback, so that he would be available in that format. And that was Cormac McCarthy."

Asked to recall a revival campaign that didn't do as well, Halpern joked, "We tend to forget those." He said that success can be measured in various ways, citing Ecco's experience with the backlist of Paul Bowles. "He's not a bestseller, although 'The Sheltering Sky' has sold a lot of copies," Halpern said. "But I think that was as important as anything we've done, to keep Paul in print and in front of everybody."

For her part, Erica Heller didn't set out to kick-start a revival of her father's work. When asked why she decided to write her book, she offers an unassuming and honest answer. "It was going to be the 50th anniversary of 'Catch-22,' and I figured someone was going to be writing about it, so it might as well be me," she said. "Also," she added, "I missed my parents, and you kind of have them back for a little bit when you write about them. I didn't have a job, and I wanted to write something and it just all came together."

Though partially a tale of heartache -- particularly memorable is the chapter in which she discusses the dispiriting way a character apparently based on her is depicted in the autobiographical "Something Happened" -- Erica Heller's book is also packed with wonderful anecdotes of a sort that aren't always found in proper biographies. She recalls how "Catch-22" elevated the family's financial well-being to the point where she was allowed to order shrimp when they dined out, and she pens an exquisite short chapter about Horses, the racetrack-based board game that Joseph Heller, Mario Puzo (author of the "Godfather" books) and several others invented to amuse themselves.

Heller said she doesn't "consider myself an expert" on her father's work, and as evidence, her book offers this stunning revelation: She's started, but never finished, "Catch-22." "It's unimaginable to me that people wouldn't be reading his books, but 50 years is a really long time," she said. "I can't really predict where it will go. But I'm very proud of him, and to have what I gather is a resurgence now is extraordinary."

Daugherty, for one, has experience when it comes to trying to create a renewed sense of enthusiasm about his favorite writers. His last book, "Hiding Man: A Biography of Donald Barthelme," was published in early 2009, and given its less commercial subject, it's not surprising that it failed to connect with a broad swath of the reading public. But Daugherty is undaunted, and given that Heller is far more famous than Barthelme, he feels that his biography might just gin up some excitement around an author whose most popular book is now 50 years old.

"I think biography still is the way into that," he said. "... I think we're at a time right now where art is being questioned, and literature's power is being questioned, so the main thing I want is for younger readers to see literature as an ongoing, very powerful art form," Daugherty said. "People like Heller and Barthelme took it very seriously, and did make changes in the way people thought. We haven't lost that. If we lose it, it's because we're doing it to ourselves, it's not because the form has lost its power."