With Washington's bipartisan blessing, Israel is sabotaging a Palestinian plea for U.N. recognition 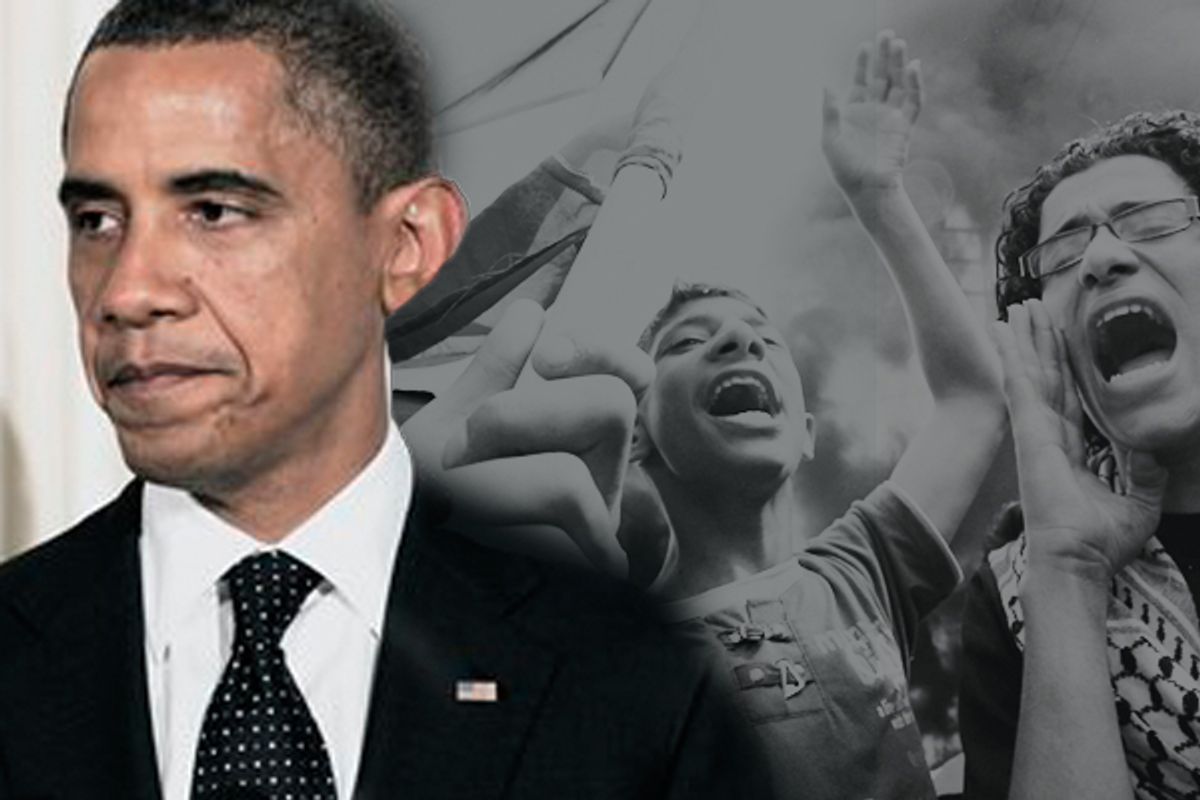 Once again Israel is doing its utmost to block Palestinian aspirations for self-determination, unleashing its diplomats in order to obstruct Palestinian efforts to secure some semblance of statehood and freedom at the United Nations this September. Meanwhile, the U.S. and other powers have nothing meaningful to add to this debate except to support Israel's sabotage. Such a predicament is nothing new for the Palestinians.

Like so much else in the modern Middle East, this obstruction started with Britain, which controlled Palestine from 1917 until 1948, and which never fully accepted that the Palestinian Arabs were a people entitled to statehood in their own land. The 1922 League of Nations Mandate for Palestine, hand-crafted by the British to suit their own desiderata, and repeating the wording of the 1917 Balfour Declaration, explicitly recognized a "Jewish people" who were entitled to a "national home" in Palestine. While the Palestinians formed over 90 percent of the population, their existence and their national and political rights were never mentioned in this document, which formed the basis for British rule of the country. Even when the British offered "concessions," these always involved Palestinian acceptance of superior rights for another people in what Palestinians considered their homeland.

This same two-tier rights principle was at work in the United Nations General Assembly partition resolution of 1947. Instead of Palestine becoming an independent state with a one-third Jewish minority, or most of it going to its Arab majority, the U.N. mandated that over 55 percent of the country -- only 7 percent of which was Jewish-owned at that time -- should become the state of that minority. The Arab state called for under the plan, however, would have been divided in four pieces, would not have included Jerusalem or Haifa (two of the three cities with the largest Arab populations), and embodied numerous other injustices. The gerrymandering necessary to give the Jewish state most of Palestine was so grotesque, in fact, that it would have had nearly as many Arabs as Jews in its population.

Perhaps because of revulsion at (and guilt over) the just-revealed horrors of the Holocaust, these provisions were all presumably considered acceptable to the great powers, headed by the U.S. and the USSR, which rammed this resolution through the General Assembly. The Palestinians, shattered by British repression of their desperate anti-colonial revolt at the end of the 1930s, divided, and leaderless, never reacted coherently to this unjust plan, except to reject it. But it was superseded long before it was due to be implemented in mid-May 1948 by successive offensives of well-organized and well-armed Zionist forces, which took over vast swaths of land that had been allotted to the Arab state. The great powers did nothing to prevent this from happening, or later to ensure that a Palestinian state came into being. This is not surprising, as most of them, as well as Israel and Jordan, were in fact opposed to the creation of such a state, and connived in Jordan's absorption of most of what remained after Israel had expanded its control to 78 percent of Palestine by the time of the 1949 armistice accords.

Statehood and self-determination continued to elude the Palestinians in subsequent years. Once again facing daunting odds, as in the past, Palestinians often did not maximize their opportunities due to poor leadership, incoherent strategy and a limited understanding of the politics of the great powers, both domestic and external. It took nearly two decades after the debacle of 1947-49, which shattered Palestinian society and turned over half its people into refugees, to rebuild a coherent Palestinian national movement. It took Palestinians even longer to formulate an unequivocal demand for a state on the 22 percent of Palestine not incorporated into Israel after 1948. After a decade and a half of movement in this direction (and away from the earlier idea of a democratic state for Arabs and Jews in all of Palestine), the PLO finally issued its 1988 declaration of independence, ironically basing the claim on the 1947 partition resolution.

Irony, it seems, is the constant companion of Palestinian history, as by 1988 Israeli annexations, colonization and land expropriations in Jerusalem and the West Bank had already begun to make this solution impossible. Today, after 44 years of such ceaseless effort, it is highly questionable whether this process can be reversed. Few people who understand the powerful forces behind this effort within Israel (perfectly represented in the current government), or who have closely examined the situation on the ground in the occupied territories, believe that it is any longer possible. Even President Obama in his modest attempt to freeze settlements last autumn, witnessed first-hand the momentous obstacles to any and all challenges to the status quo, no matter how reasonable or feasible they may be. One of the greatest of these obstacles is the U.S. Congress, 81 of whose members are this month going on a "magical mystery tour" of Israel sponsored by an AIPAC offshoot, where they will be sure to be shown nothing that would disturb that body's smug pro-Israel complacency.

Today, the PLO proposes that the United Nations recognize a state within the 1967 borders whose creation has already been preempted by systematic Israeli actions that were intended to prevent just such an outcome. President Obama, Congress and other unwavering supporters of Israel insist that the Palestinians refrain from seeking a U.N. resolution recognizing such a state and that they can only accede to statehood through negotiations with their occupier and tormentor. In this regard, it is worth recalling further the events of 1947-48. Then no one demanded that the Jews in Palestine refrain from going to the U.N., that they negotiate with the Palestinians or jump through any other hoops in order to obtain statehood: indeed, their state obtained its legitimacy through a General Assembly resolution (the 1947 partition decision), and in 1949 was accepted as a member state by the General Assembly, just as the PLO currently proposes to do.

At that point, the new state of Israel had international public opinion and the great powers on its side, and it already had an army that had defeated first the Palestinians and then several feeble Arab armies, and would do so again repeatedly in subsequent decades. That army is still preeminent in the region. Furthermore, today the greatest of great powers, the United States, is even more one-sided in its support of Israel than it was in 1947. But international public opinion has evolved since 1947. It increasingly recognizes that the denial of Palestinian self-determination is the core of the problem, and that the solution is not more of a misguided "peace process," which allows for the consolidation, perhaps permanently, of Israeli control of the West Bank.

Further immiserating Palestinians is no solution, though Congress will undoubtedly soon try to prove otherwise by cutting aid to the Palestinian Authority for having the temerity to press for statehood and freedom at the U.N. Whatever solution emerges, it cannot do what every formula proposed for Palestine by the great powers since the 1917 Balfour Declaration did: allow superior rights to one people at the expense of another.