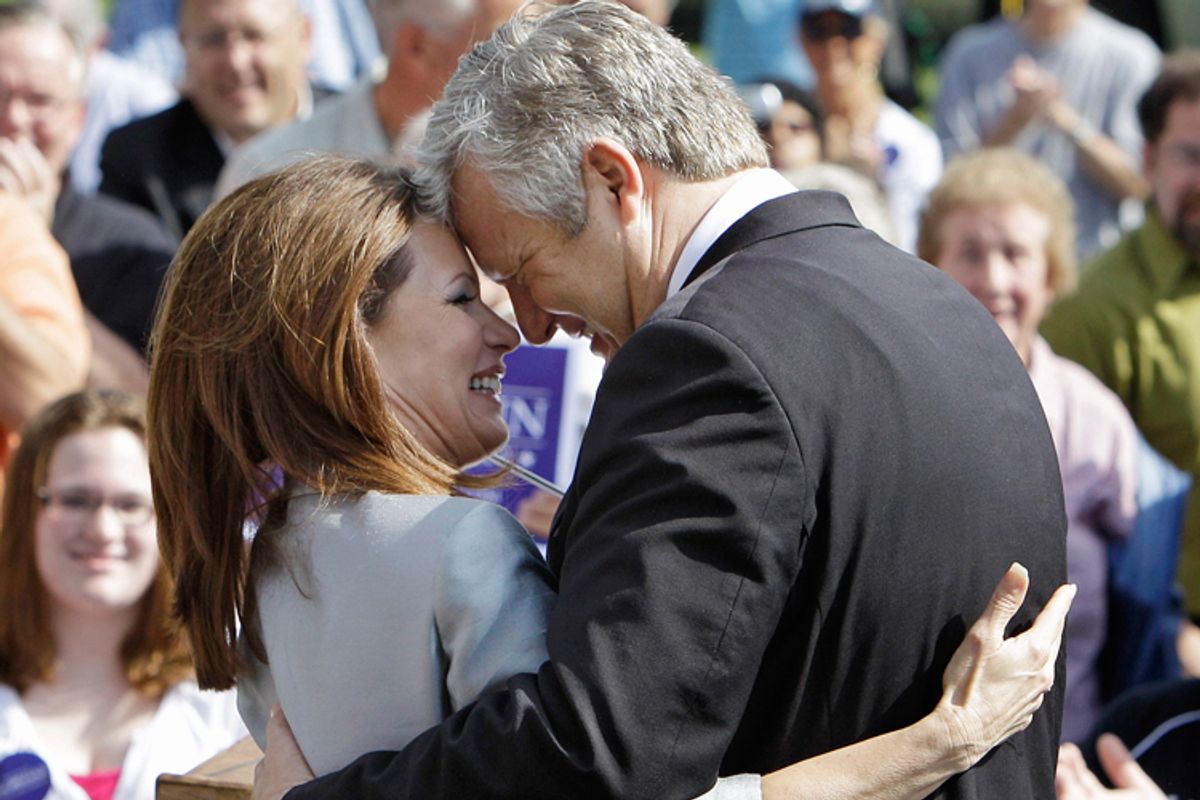 Rep. Michele Bachmann, R-Minn., gets a hug from her husband Marcus following her formal announcement to seek the 2012 Republican presidential nomination, Monday, June 27, 2011, in Waterloo, Iowa.
--

When the Washington Examiner's Byron York asked Michele Bachmann if she was submissive to her husband at the Fox News GOP debate Thursday night, the crowd gasped and booed. That's because wifely submission -- also known as complementarian theology -- is central to the faith of many evangelicals. York's question wasn't about religion per se, but was an attempt to probe whether, if Bachmann became president, America would be getting Marcus' decisions and not hers.

It's common for Christian politicians questioned about their adherence to submission theology to dodge a scriptural explanation, as Bachmann did. After all, while dominionist-minded evangelicals like Bachmann intentionally set out to bring their "biblical worldview" into politics, they recognize that it's bad 21st century politics -- especially for a female candidate -- to admit to a theology that could cause the same gasps and boos from voters who would recoil at the image of an obedient wife as president of the United States.

Rep. Daniel Webster, R-Fla., the target of then-Rep. Alan Grayson's "Taliban Dan" ad because of his commitment to submission theology in the 2010 midterm election, similarly refused to explain to his constituents what the theology really is. During the 2008 presidential campaign, Mike Huckabee, a former Southern Baptist pastor, was questioned about his denomination's official adherence to it, although he never really explained it either.

Bachmann has reached out to evangelical voters by emphasizing her adherence to a "biblical worldview," but when questioned about it -- particularly about the "biblical" view of gender roles -- Bachmann wasn't a very good evangelist. Whatever happened to proudly expressing her faith?

On Thursday, Bachmann smiled and talked about how in love she is with Marcus and maintained that their relationship is based on respect. Pundits described it as a "human" moment, a deeply committed spouse describing a loving partnership. But if Bachmann had explained her interpretation of the theology, we would have gotten a lesson in far more than her relationship with Marcus. We would have received greater insight into what her "biblical worldview" means for her understanding of law and policy.

The video that inspired York's question is a perfect example of why Bachmann appeals to evangelicals and alarms other voters. She was speaking at Living Word Christian Center, a Minneapolis area megachurch, in 2006. She was running for Congress for the first time, and was describing, in distinctly evangelical terms, her path to politics. Bachmann recounted how as a college student she decided to marry Marcus not because of a "romantic surge," but because God had given her a vision that she was to marry him. God "began to create in us and to perfect for us what his plan was for us," she added. Bachmann the college student didn't want to go to law school, but nonetheless she said God led her to Oral Roberts University, the first "Christian" law school "where they taught law from a biblical worldview." When Marcus told her she should get an additional degree in tax law, she exclaimed, "Tax law? I hate taxes. Why should I go and do something like that? But the Lord says, be submissive, wives, you are to be submissive to your husbands."

Later, Bachmann added, about her decision to pursue the additional degree at William and Mary Law School: "By faith, I was going to be faithful to what I felt God was calling me to do through my husband."

Submission theology is built around the notion that God has a "design" for men and for women; that they are unique from each other and have their designated, God-given roles. The husband is the spiritual head of the household, the wife his obedient "helpmeet," the vessel for their children, devoted mother, and warrior for the faith. By committing themselves to those gender roles, evangelicals believe they are obeying God's commands. They see the wife's obligation to obey her husband's authority as actually owed to God, not her husband.

But the obligation falls on the woman to be obedient, even when the husband doesn't love her as evangelicals believe God commands. As Kathryn Joyce, author of "Quiverfull: Inside the Christian Patriarchy Movement," explained during the flap over Grayson's ad:

Submission is a contentious and tricky issue even within conservative evangelical churches. Most churches promoting submission make certain to couple demands for submissive wives with those for loving, servant-leader husbands. But at the end of the day, it's women who bear the brunt of the principle; their obligations are to God, not to a husband who may or may not keep his end of the contract. Accordingly, the message is impressed by countless women's ministries and leaders that women must continue submitting even when their husband doesn't show love, because they owe their obedience, above all, to God.

While not all interpretations of submission theology are alike, and some are far more severe than others, women who have experienced its harsher iterations described it as "I gave up my rights to be who I was" and compared escaping to "getting out of hell."

Regardless of the Bachmanns' relationship, candidate Bachmann's policy initiatives, as they relate to issues like gay marriage, abortion and funding for Planned Parenthood, stem directly from her "biblical" view of gender roles. "God's design" for gender roles is not limited to the issue Bachmann usually applies it to (opposition to gay marriage). God’s design, in her view, is for (Christian) men and women to get married to serve God, and for the woman to be a mother and a fierce defender of the "biblical worldview." Bachmann's worldview, which she sees as under siege by secularists, feminists, imaginary socialists and other boogeymen, must be defended for future generations. "An arrogant corrupt Washington elite," Bachmann insisted earlier this year, has "declared war on marriage, on families, on fertility, and on faith."

In the 2006 campaign appearance, Bachmann talked about how people told her that only a "fool" would spend so much time running for a job with a two-year term. To emphasize how she was obeying God in her quest for higher office and defense of her "biblical worldview," she exclaimed, "You’re now looking at a fool for Christ."