The photos that kept her alive for me

Years after losing my fiancee, I was addicted to pictures of her, and an alternate reality where she still existed 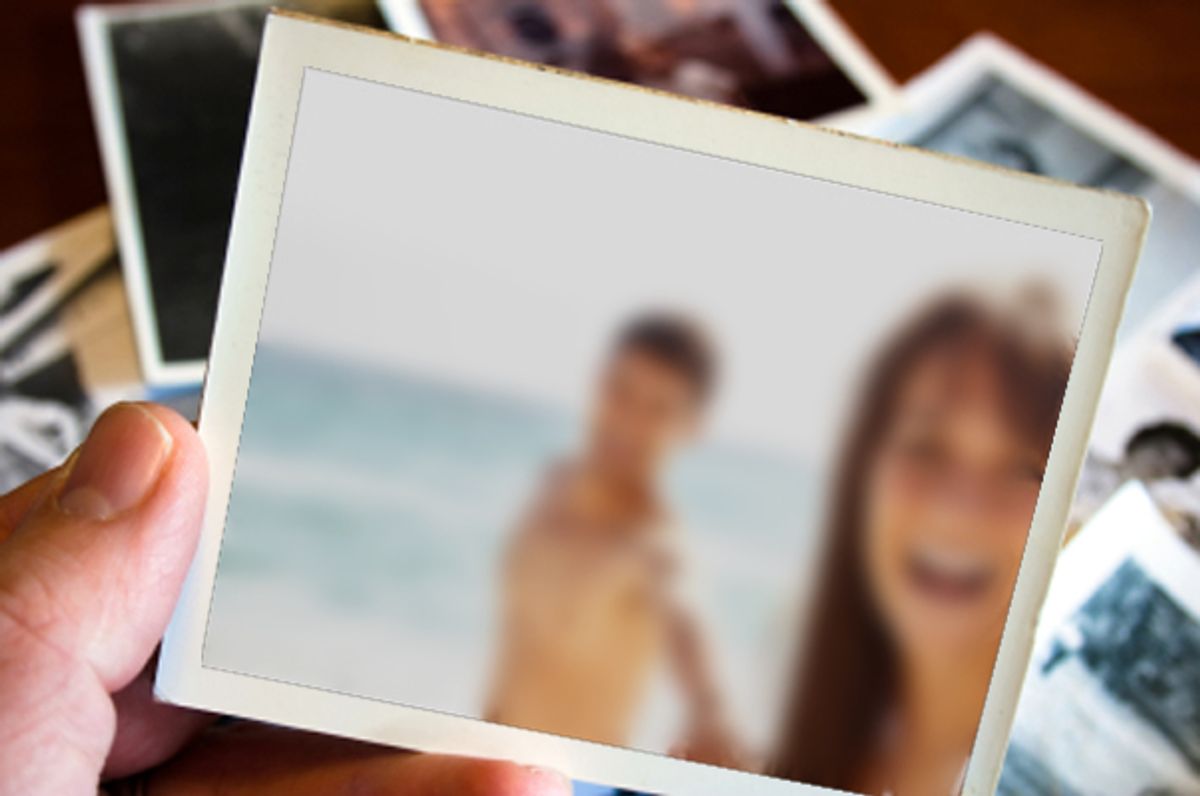 I'm lying in bed with my bath towel still wrapped around me. The New York summer heat will not let me stop sweating, so I see no point in getting dressed. I click through some photos of us on a beach on the Salmon River in Idaho with friends -- she in a bikini, hitting a volleyball straight up in the air, me in some retro board shorts that show more of my thighs than I like, but she liked.

In the same picture, she looks good. She's concentrating on the way the wind traveling through the river's canyon is going to affect where the volleyball goes, and this causes her thighs to flex and her fine eyebrows, which usually look like subtle tide lines in the beach sand, to hug each other with determination. She always looks perfect. She's always brown, strong, smiling, and everything is always perfect.

I look at the picture and then at my rising belly, and I feel further and further from her and the person I used to be. I feel older, meaner. My chest looks sunken. I hope I'm the same person that she fell in love with.

I click on the picture and start dragging it to the trash, but I stop and close my laptop. Next time I won't stop, I tell myself. I won't stop until I've deleted every picture of her I feel I should no longer have, every picture I keep going back to.

Almost three years ago, my fiancée died in a car accident in Portland, Ore., where we had moved, reluctant but hopeful, to escape a post-Katrina New Orleans. After her death, which the police said was instant, I continued my affair with her by secretly returning to photos and videos of her on an external hard drive. Most of the jpegs and mpegs are innocent, playful -- footage of her dancing in her red long johns by a campfire, pictures of her dancing at a Kermit Ruffins concert when we still lived in Louisiana, pictures of her making breakfast in a T-shirt that showed a hint of her bottom but all of her legs; after a hot day on the volleyball court, they smelled like a cinnamon latte.

There were also nudes. And I used them, because in my mind she was always still alive and telling me exactly where to kiss her, for how long and how hard, until her legs would stretch for the foot of our bed. I studied the pictures, and I thanked them at times, and I cursed them at other times when they refused to summon her voice or her scent, or when I felt guilty and then got angry at the collection instead of myself. I understood that I was trying to make love to her. I felt entitled to it, and believed that she would want it that way because the photos were gifts from her to me.

But over time, I became aware that I was retreating, not even into the past, but into some extra-world third reality type place, a sort of place where she still existed and nobody else did. And I could keep visiting her forever, as long as I didn't tell anybody and didn't allow myself any self-evaluation. It was easy to hide.

In hopes that I would reestablish forward momentum and pursue something my fiancée always supported, I joined a graduate writing program in New York. My New York friends didn't hear me talk about my fiancée very much. My affections toward them were inconsistent and wavering. I loved and hated them at times. I wore different personalities around them, or sometimes I played a caricature of myself. I could be straight-up rude to people who were actual friends. The only place I felt like myself was in my one-bedroom apartment in Brooklyn, alone, and even more when I was looking at pictures of my fiancée.

Despite the comfort the pictures provided, I had daily internal debates about which ones I should keep and where I should save them. I hid them in computer files reserved for the things like fonts and colors – places too boring-sounding for anyone to ever want to search – and then I would move them somewhere else, maybe the one in my word processor's folder for synonyms. Some photos I deleted from my computer and then I would return to my external hard drive and replace the ones I had just deleted.

I hid the external hard drive among a seemingly disordered pile of memorabilia and clothes that appeared to have never been fully unpacked after my move to New York. But I knew exactly where everything was supposed to be, every postcard from an old friend, every dirty sock, every book.

Friends often crashed on my couch, which happens if you live in New York and are only half-employed. These were friends I had known for years. But still, I imagined them plucking the external hard drive from its hiding, then plugging it in and browsing through my affair. I became so paranoid they might invade my privacy that I took a picture of the hiding place with my iPhone. Before I moved the external hard drive I would study the picture and confirm that everything was in its right place.

More than once I tried to delete everything from that external hard drive. Every time some error would occur. I feigned frustration over it for nobody but myself. The glitch confused me, but it also gave me the chance to continue the affair.

Eventually, the photos didn't make me feel any closer to her. I told my former English professor/unofficial godmother/best friend about it. Although we've known each other for 11 years, our conversations still remain in that primarily cerebral yet slightly intimate place first founded in the advisor-rowdy student relationship. We discussed relations via the Internet and the distancing that occurs – how a digital photo of a person has a physical code thing, but it really exists as a symbol of the personality of the individual. But when the digital photo is the only thing that's used to access a personality, it gradually becomes nothing more than the physical code thing, and the personality, which isn't as vague as a “thing” at all, goes somewhere else.

If I destroyed the pictures, would I return to my imagination and remember her more fully?

Another memory: She comes inside and throws our dirty laundry hamper on the floor. She's sweating from climbing the three flights in the middle of the August sludge. Her fingernails are black with charcoal because she's been working on some drawings throughout the day. She draws whenever she can. She says, ‘There's standing water sitting in the laundry room.'

"You're the writer. You explain it."

I called her mom and gave her a very vague idea of what I was doing. Her mom talked about Thomas Jefferson and tried not to cry. She's a history enthusiast. She said that Jefferson destroyed many of the letters between him and his wife, Martha, after she died at the age of 33. I wondered if I needed to destroy some of our photos simply because it was my responsibility to keep private aspects of our relationship between us.

If we could switch places my fiancée wouldn't have this problem. She'd find a better way to hold onto me, better than pictures.

I moved the files I felt I could keep on the computer. I took the external hard drive out to the pavement. It was cold enough that day that I was wearing the sweater she had bought me, one that we took turns wearing on camping trips. I dropped the hard drive to the pavement and followed it with my weight, bringing the mallet down with all the power I could. There was a thud. I fought my desire to drop the mallet and run the external hard drive upstairs and plug it back into my computer to make sure it was OK. I hit it again. Nothing happened. I kept hitting. I felt the perspiration chill the back of my neck and I saw the hard drive slowly unfold, buckle and crack until I could tell that there was nothing left of her.

So it's time that I go back to New Orleans. Down there is time, and it's quiet. There will be big rooms with hardwood floors and ceiling fans. The sounds coming in through the windows will be like the sounds before but I'll force myself to hear them differently. I can unpack our things. I'll catalog all of her artwork and maybe even get it printed and bound professionally. I'll let some things disappear but I'll celebrate the things on which I saw her depend and thrive; her artwork will hang on the crooked walls of my old shotgun house for anybody to see. I won't sabotage new friendships, and I'll make room for a new version of New Orleans in my mind. I might never destroy anything again.

Peyton Burgess graduated from NYU's MFA program for fiction in May. His poetry, fiction and nonfiction have appeared in Exquisite Corpse, The Rogue Voice and The Faster Times.