Obama and his party cling to the familiar narrative that their hands are tied. They're wrong 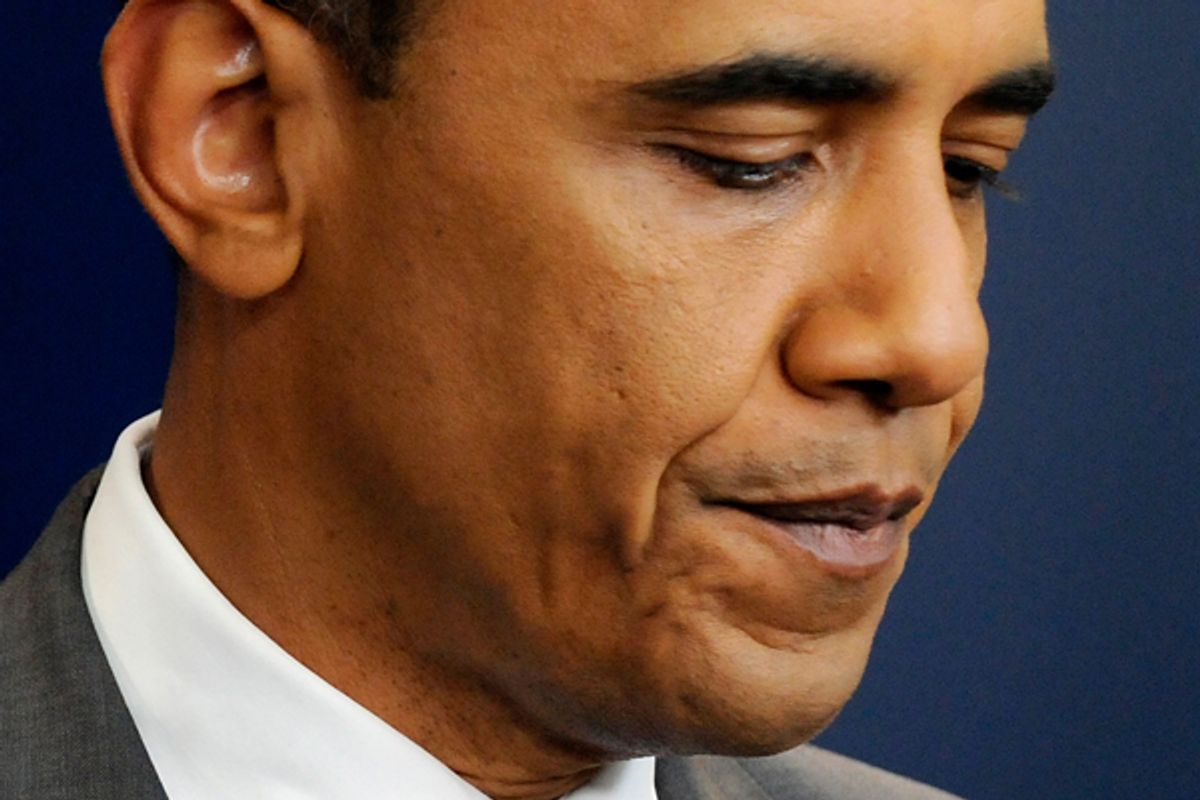 "Obama's aides say the president has a responsibility to explore policies that have a chance of passage, rather than merely making a political statement." -- Washington Post, 8/10/11

One of the most persistent memes in modern politics, perfectly embodied by the above quote, is what I've long called the Innocent Bystander Fable. It goes something like this: Democrats really want to do X, but they can't because it's "politically impossible" not "where the country is" and/or doesn't "have a chance of passing."

The idea is that even though Democratic politicians occupy the most powerful offices in the world, and even though X usually represents a policy 80 percent of rank-and-file voters support, Democrats are nonetheless powerless bystanders before political events rather than shapers of such happenings. In response, we are expected to nod our heads in agreement (as so many blind partisans do), somehow forgetting that these politicians are paid hefty taxpayer-funded salaries not to be bystanders, but to actually use the authority they have to make -- or at least seriously advocate -- change.

This Innocent Bystander Fable, of course, has long been the excuse the Democrats have used almost every time the party wants to avoid taking a stance on an issue.

In practice, this fable has been used to make excuses about everything from the Iraq war to the public option to the Patriot Act to the debt ceiling to, now, job creation. It has its local iterations as well -- in my state of Colorado, it's our Democratic governor insisting "I am the biggest supporter of education you can imagine," before championing one of the largest cuts to education funding in state history, and then claiming he opposes raising taxes to better fund schools because voters supposedly have "no appetite for new taxes" -- as if a sitting governor simply cannot use the bully pulpit to change that (purported) anti-tax reality.

In every case, it's the same -- powerful Democratic officeholders would have us believe that while they really want to do the right thing, they are just passive bystanders to history.

Crude as it is, this fable has been deliberately created as a defense mechanism and a cudgel -- the media cites it to recast rank corruption as a noble "willingness to accept what is politically possible," while the political establishment uses it to bash critics as one or another form of lunatic -- in the words of Obama administration officials and other government sources, junkies who need to get "drug tested," "Cheeto eating people in the basement," children in "pajamas [who must] get dressed" and "Internet left fringe" types. Following the lead of the politicians they worship, partisan sheep then knead this into conventional wisdom among the activist class, ultimately leaving anyone who wants anything different from their government (oh, I don't know, a President Obama who actually tries to fulfill his campaign promises) lambasted as a crazy person who just doesn't "understand" today's "political reality."

The problem, though, is that after a few seconds of cogitation, it becomes clear that the Innocent Bystander Fable actually makes no logical sense. To demonstrate this, let's more closely consider the assumptions embedded in the quote at the top of this article.

According to the Washington Post, the president's advisors say the only "responsible" thing for the president to do is to "explore policies that have a chance of passage, rather than making a political statement." Translated into plain English from Washington-ese, this is the White House stating that the president will only consider job-related legislation that congressional Republicans already support, and that the president will not push a proposal that the GOP right now opposes. Hey, the administration is saying, the president is binded by the political reality of today's GOP intransigence -- and there's nothing he can do about that, other than work within that reality's confines.

Except, of course, there is something he can do. He can stop pretending to be an innocent bystander, and instead acknowledge what he really is -- an active participant, and likely the single most powerful one, in the political process. In Washington-ese, he can reject the notion that having "a chance of passage" is the opposite of "making a political statement" -- and realize that the two are complementary concepts. In short, like other legislatively successful presidents, he can use "political statements" as a means of changing the political reality, thus giving other legislative alternatives "a chance of passage."

What's that look like in practice? Well, something like George W. Bush -- one of the most legislatively successful presidents ever (this is a statement of truth: Bush did pass a boatload of legislation, even if I didn't agree with the substance of it). This was a president who, when faced with a political reality he didn't like, made "political statements" (that is, barnstormed the country making speeches, twisted congressional arms, exploited major news events, etc.) to change that reality.

The end result was the realization of events that weren't "politically possible" until his "political statements" made them so -- things like the Patriot Act, a preemptive war in Iraq, an unending occupation of Afghanistan, a massive bank bailout and insane budget-busting tax cuts for millionaires. Even Bush's initially failed effort to gut Social Security today looks like a key "political statement" that may have ultimately changed what has a "chance of passage," as both Democrats and Republicans now put Social Security cuts on the table.

This is the truth that undergirds my recent column, in which I argued that President Obama is one of the strongest presidents in modern history. Though the White House wants us to believe that the president is a weak innocent bystander to the Republican colossus, he's actually the opposite. As the single most powerful political actor on the planet, he is actively complicit in every political outcome of his term -- and, as the Washington Post shows, he's quite deliberately choosing to avoid trying to change the definition of what's politically possible/passable.

The real innocent bystanders in this charade are the millions of Americans who have been harmed by the Democratic sleight of hand. The partisan activists, operatives and pundits who make excuses for such betrayals are bystanders, too -- but they aren't innocent at all.