Rick Perry's got some nerve

The governor who's talked about Texas seceding from the U.S. implies Obama isn't "in love" with America 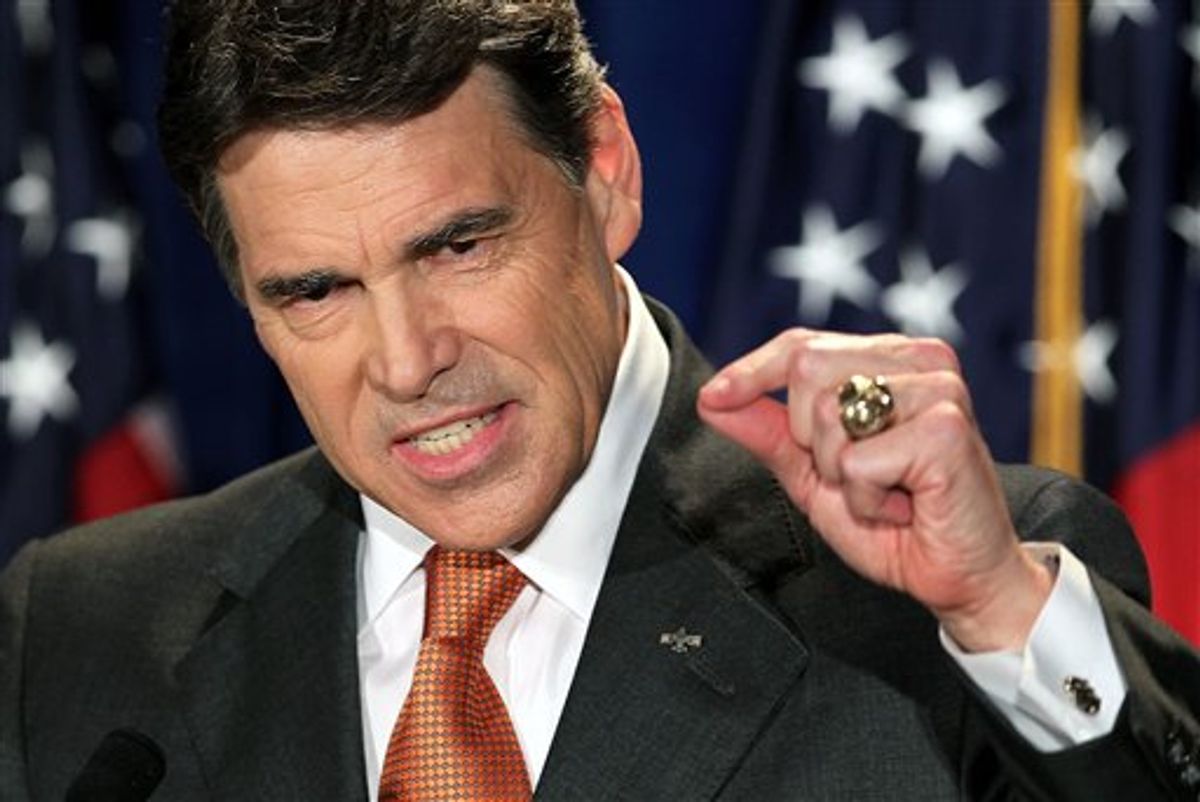 Monday is "Get to know Rick Perry" day in the liberal wing of the media, with Paul Krugman, Joe Conason, Joshua Holland and others providing great data about the myth of the strong Texas economy and other Perry whoppers. Perry's Texas leads the nation in minimum-wage jobs, uninsured children, high school dropouts and pollution. He balanced the state's budget with stimulus money he railed against. His record won't back up his bragging.

We also learned in Perry's 48 hours in the race that he's a classless boor. He stomped on Michele Bachmann's Ames straw poll win with his cowboy boots, coming to Iowa to save the GOP from the little Christian lady with the faraway eyes. Then Monday, asked by a reporter if he had a message for nominal GOP front-runner Mitt Romney, he blew the former Massachusetts governor a mocking kiss and said, "Send him my love." But of course he saved his nastiest remarks for President Obama.

On Sunday night he told a Waterloo audience that "One of the reasons that I’m running for president is I want to make sure that every young man and woman who puts on the uniform of the United States respects highly the president of the United States," he said. As though the American military doesn't – or shouldn't -- respect Obama, the man who took down Osama bin Laden after George Bush failed. On Monday Perry told an Iowa crowd that we need a president who's "in love" with America -- implying, of course, that Obama is not. This from a guy who's "joked" about Texas seceding from the United States -- but only since Obama became president.

One of Perry's secession remarks made to a Tea Party group in 2009 got a lot of attention, but Perry defenders have noted he was replying to a question, not raising the notion of secession on his own. Last week, though, another favorable Perry reference to secession surfaced, and it features Perry bringing up the idea of seceding all by himself. He told a group of bloggers, "When we came into the nation in 1845, we were a republic, we were a stand-alone nation. And one of the deals was, we can leave anytime we want. So we’re kind of thinking about that again."

Given Perry's fondness for secession, I thought it noteworthy that he announced his presidential campaign not in Iowa but in the capital of secession, South Carolina. Justin Elliott did a great piece showing the way Perry has flirted with neo-Confederates without coming out and endorsing their views. He's clearly taken up the mantle surrendered by Mississippi Gov. Haley "racism wasn't that bad" Barbour when he declined to run in April.

With his graceless attacks on Obama, Perry signals that he'll join the ranks of those who've tried to destroy the president by insinuating -- or saying outright -- that Obama's just not one of us, and he doesn't love his country. Casting doubt on whether Obama has the respect of the military or is "in love" with America tells the birthers and the wingnuts he feels their pain at living under this Kenyan Muslim socialist usurper.

But is Perry really the guy who can save the Republican Party from the extremist Bachmann and the dull Romney? The candidate who can fuse Tea Party energy with corporate respectability? The house organ of the GOP doesn't seem to think so. Steve Kornacki already noticed the Wall Street Journal's near-panic over the GOP presidential field in the wake of Perry's declaring his candidacy. The key paragraphs:

The emergence of Mr. Perry and Mrs. Bachmann is nonetheless more evidence that GOP voters continue to have doubts about their candidates. Mitt Romney is a weak front-runner who has money and campaign experience and looks Presidential. But he gives little evidence that he has convictions beyond faith in his own technocratic expertise. Former Utah Governor Jon Huntsman is likewise running on his resume more than a philosophy of government. We would have thought that John McCain proved you can't beat Mr. Obama on biography.

Republicans and independents are desperate to find a candidate who can appeal across the party's disparate factions and offer a vision of how to constrain a runaway government and revive America's once-great private economy. If the current field isn't up to that, perhaps someone still off the field will step in and run. Now would be the time.

WSJ owner Rupert Murdoch and Roger Ailes must wish they'd done a better job hiring wannabe GOP presidential candidates as Fox News commentators. Newt Gingrich and Rick Santorum are likely to follow Tim Pawlenty to the exit. Mike Huckabee decided not to run and so far Sarah Palin appears to share Huckabee's fondness for wealth and punditry. Romney may be the only Republican with a chance to reach for the center and beat Obama, and he may not make it out of the Republican primary.

I'll be talking about all of this tonight on MSNBC's "The Ed Show" at 10 pm ET.