No, Ron Paul is not getting screwed

He nearly won the Iowa straw poll, but you'd never know it from the press coverage -- and for good reason 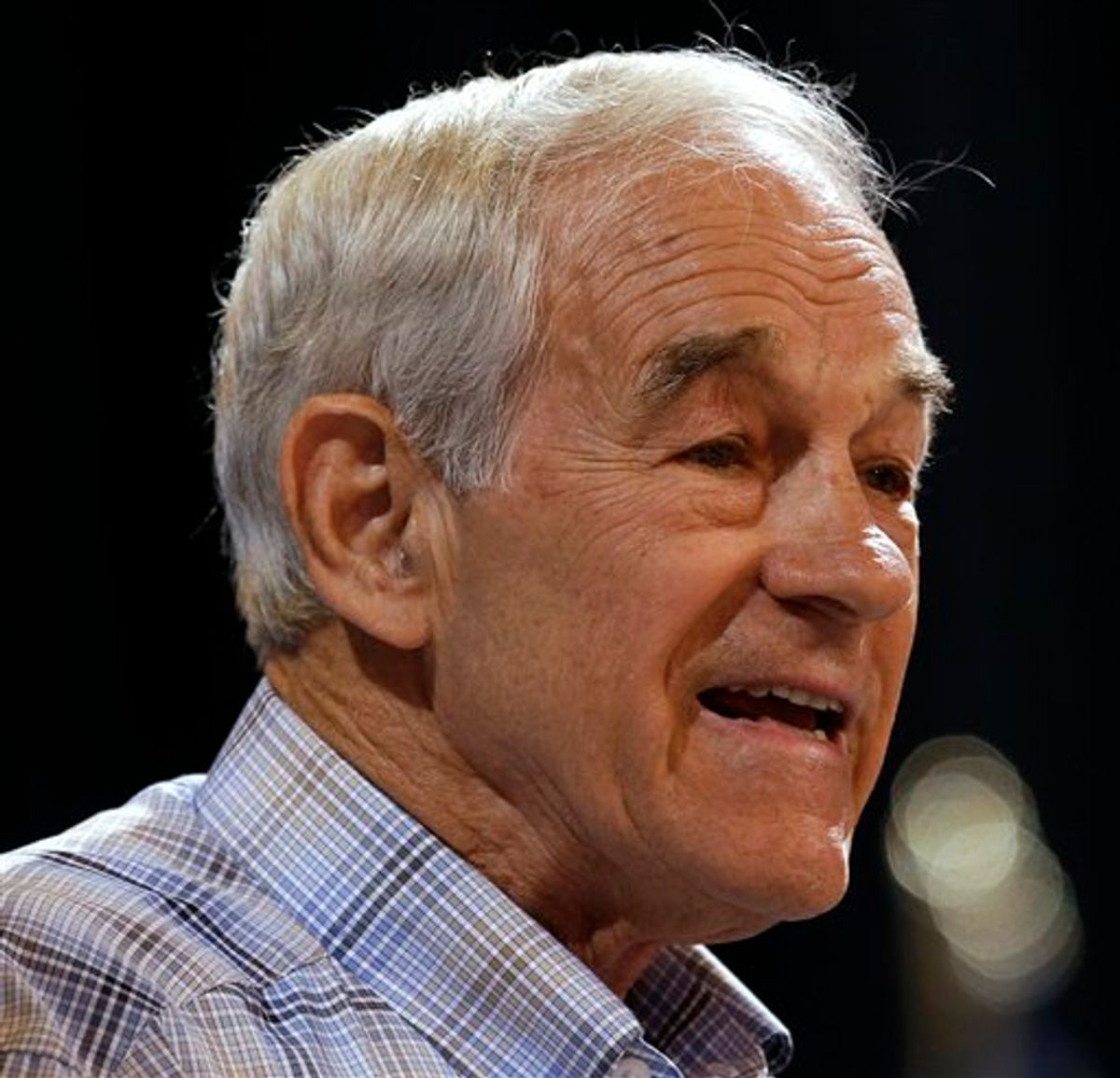 Ron Paul came within 152 votes -- or less than 1 percentage point -- of beating out Michele Bachmann and winning the Iowa straw poll a few days ago. It was, in other words, a virtual tie. But you'd never know it from the way the national political press has reacted.

While Bachmann's victory has been celebrated as a revelation, proof that she just might be able to play in the big leagues after all, Paul's performance has gone virtually unnoticed. On Sunday morning, with much of the political world camped out in Ames after the straw poll, Bachmann did "the full Ginsburg," appearing on the five major national public affairs television shows. Not a single one of those shows invited Paul, who told Politico on Monday that "I had one interview scheduled for this morning, a national program, but they canceled."

So the evidence is pretty clear that Paul is (as Politico's Roger Simon put it) getting shafted by the political media, right?

There are a couple of reasons why. Let's start by looking at the immediate issue of the straw poll. Those who believe Paul is getting a raw deal seem to assume that there should be a direct relationship between a candidate's straw poll performance and the level of media attention that candidate receives as a result -- first place gets the most face-time, second place the second-most and so on. By this standard, Paul should have received virtually the same amount of attention as Bachmann, since they received virtually the same number of votes.

The problem is that the straw poll isn't really about the literal order of finish. It means different things to different candidates for different reasons, and its main function has long been to help winnow or otherwise clarify the GOP field. As Jonathan Bernstein put it, it's "an unusually visible event during the invisible primary." Thus, this year's straw poll wasn't about all of the GOP candidates; it was about two particular candidates who chose to (or were forced to) contest it aggressively and who had something very specific to prove.

One of them was Tim Pawlenty, who spent the last year trying and failing to find traction in early state polls (and with GOP donors) before making the straw poll his do-or-die test. When, after pouring considerable time, money and organizational muscle into the event, he managed to grab just 13 percent of the vote, Pawlenty flunked his own test, which is why he dropped out of the race on Sunday.

The other candidate with something to prove was Bachmann, who has shown surprising strength in Iowa polling, vaulting into the lead in the late spring. Given the crucial role that conservative Christians, Bachmann's natural constituency, play in the Iowa GOP, this prompted serious talk that she might actually win the caucuses this winter -- then wreak serious havoc in subsequent contests, and maybe (under a remote but not entirely implausible scenario) walk off with the nomination. This made the straw poll a crucial test for Bachmann: Could she put together an organization capable of harnessing the grass-roots energy she has sparked and delivering a victory? Or would we find out that her campaign really doesn't have its act together, and that her star isn't really that powerful? Her victory is further reason to believe she's a serious caucus contender.

Now let's talk about Paul, who also put a major effort into the straw poll. But unlike Bachmann and Pawlenty, he didn't really have much to prove. Why? Because the political world already knows that Paul has an army of unusually loyal and dedicated supporters who are willing to show up in large numbers at events like the straw poll and producing impressive-seeming vote totals for their candidate. They've been doing this for years now. Remember when Paul won the straw poll at the 2010 CPAC conference? Or in 2011? His supporters are very good at this kind of thing, channeling their unique passion into "money bombs," Internet poll victories, and strong performances at straw polls and other events where a devoted minority can have an outsize influence.

So by nabbing 27.65 percent on Saturday, Paul didn't actually do anything to change the prevailing perception of his campaign and its appeal. Bachmann and Pawlenty faced legitimate questions about their ability to effectively organize for the straw poll. But no one doubted the Paul campaign's skills in this regard. The key question about Paul's campaign is one that the straw poll was never going to help answer: Can he build on his sizable (but ultimately limited) base of core supporters and develop mass appeal within the Republican Party?

In his 2008 campaign, he was unable to do this. Think back to the later months of 2007, when Paul stunned the political world by raising more money than any of the other Republican candidates. No one was quite sure what to make of it. Paul was supposed to be a niche candidate with no chance, but he wasn't raising niche candidate money. Was something revolutionary taking place? The answer came when the primary and caucus season began and Paul performed ... like a niche candidate. He grabbed 10 percent in Iowa, good for fifth place, and 8 percent in New Hampshire, another fifth-place showing, and that was pretty much it. The media filed this under lesson learned: Paul's supporters could make a lot of noise -- but it was misleading noise.

This is why his string of straw poll successes in the past few years -- including last weekend's -- hasn't gotten much notice. And this is probably the way it should be, until and unless Paul can demonstrate that these performances are anything but the product of his army mobilizing for relatively low-turnout events and producing deceptively impressive results. So far, there's not much evidence for this. The same Iowa polls that have shown Bachmann in the lead have generally placed Paul far behind. Real Clear Politics' average of Iowa polls has him at 7.4 percent, to Bachmann's 26 percent. (Granted, one recent Rasmussen poll does have Paul at 16 percent in the state.) In New Hampshire, that same average has him at 8.5 percent. This looks an awful lot like the Ron Paul of four years ago. And while it's true that Paul's 2011 Iowa straw poll performance (27.65 percent) is far better than his 2007 showing (9 percent), it's worth remembering that at the time of the '07 event his army was just emerging (and learning how to manipulate events like it).

None of this is an argument for ignoring Ron Paul completely, or for not allowing the issues he raises to be part of the debate. And there is reason to believe that his army has grown some since the last time around; national polls have generally shown him running over 10 percent. But the experience of 2008 demonstrated that it's very easy to exaggerate the breadth of Paul's support -- and that his views (particularly on foreign policy) are so far outside the GOP mainstream that the party establishment will go to great lengths to make sure it doesn't expand beyond his base. That still seems to be the case today.

Maybe the joke will ultimately be on us, and Paul will prove that he really does have mass support this time, enough to win (or come close to winning) some key states. But his performance at the straw poll is no reason to suspect this is the case. What Paul and his supporters did this past weekend is something we've long known they're capable of doing.