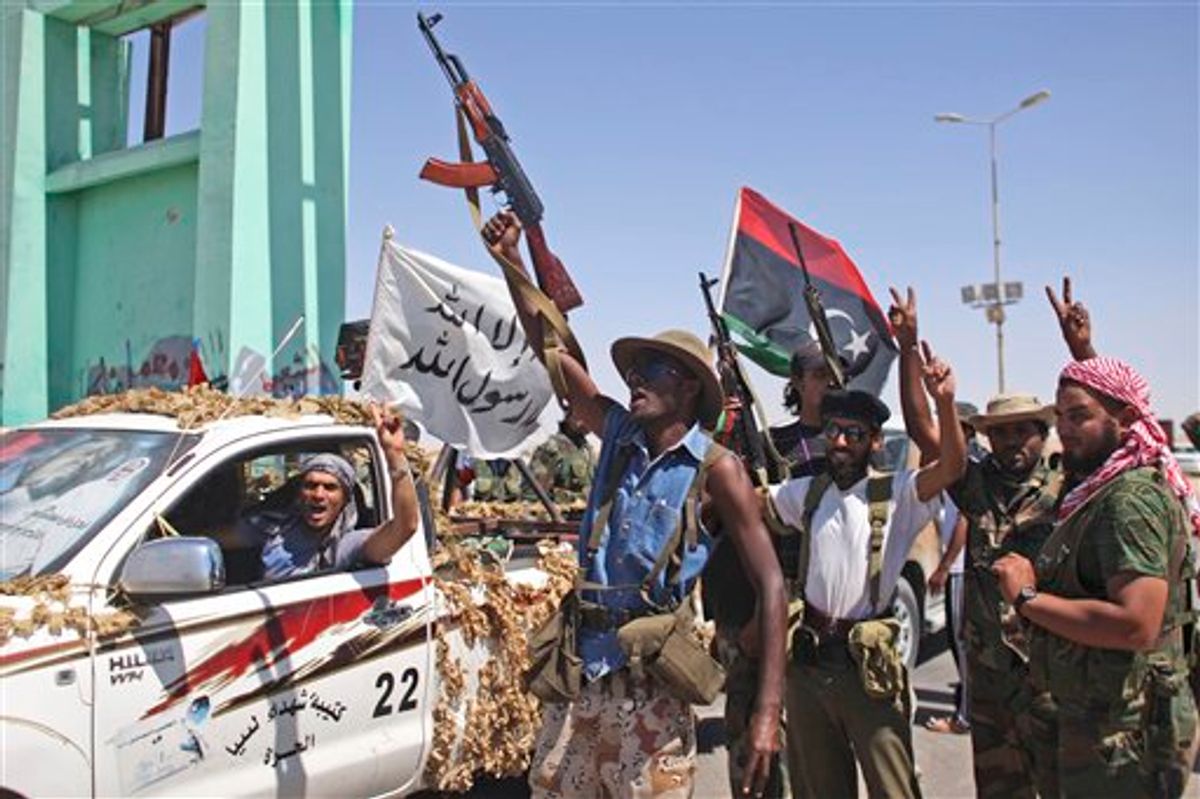 Rebel fighters celebrate at the gates of the town of Brega, Libya, Monday, Aug. 15, 2011. Most of the town has been liberated from Moammar Gadhafi's forces, with fighting going on only at the oil terminal, according the rebel military spokesman, Ahmed Bani. (AP Photo/Alexandre Meneghini) (AP)
--

Libyan government forces tapped into their stores of Scud missiles this weekend, firing one for the first time in this year's conflict with rebels, but hurting no one, U.S. defense officials said Monday.

The missile launch was detected by U.S. forces shortly after midnight Sunday and the Scud landed in the desert about 50 miles outside Brega, said one official, who spoke on condition of anonymity to discuss military operations.

Rebel and regime forces have battled over the strategic port city of Brega throughout the conflict, and control has swung back and forth between the two sides.

The strike comes as rebel forces continue to advance, working in recent days to block key supply routes around Tripoli. The Obama administration said Monday that it is encouraged by recent rebel progress, but stopped short of predicting victory for the opposition forces after months of inconclusive battles.

According to the military, the Scud missile was launched from a location about 50 miles east of Surt, a city on the Mediterranean coast about 230 miles east of Tripoli. Noting that Scuds are not precision guided missiles, officials said they couldn't tell if Brega was the target.

Brega is about 450 miles southeast of Tripoli.

Early in the conflict, NATO and U.S. forces targeted sites around the country where Libyan leader Moammar Gadhafi stored surface-to-surface missiles like Scuds, largely because they worried that he would use them to target areas beyond his control.

The military intervention in Libya began March 19, after the U.N. authorized action to protect Libyan civilians from attacks by regime forces. NATO took over the mission in early April, but the U.S. has continued to provide jet fighters and drones, as well as war ships off the coast.

Two senior U.S. officials said it is too soon to tell whether the Scud strike was a singular incident or if it represents a new phase of fighting. Scuds have a range of up to 500 miles.