GOP calls for a new presidential candidate are growing louder

If not Mitt, Michele or Rick, then who? A look at the five most frequently touted would-be Republican saviors ... 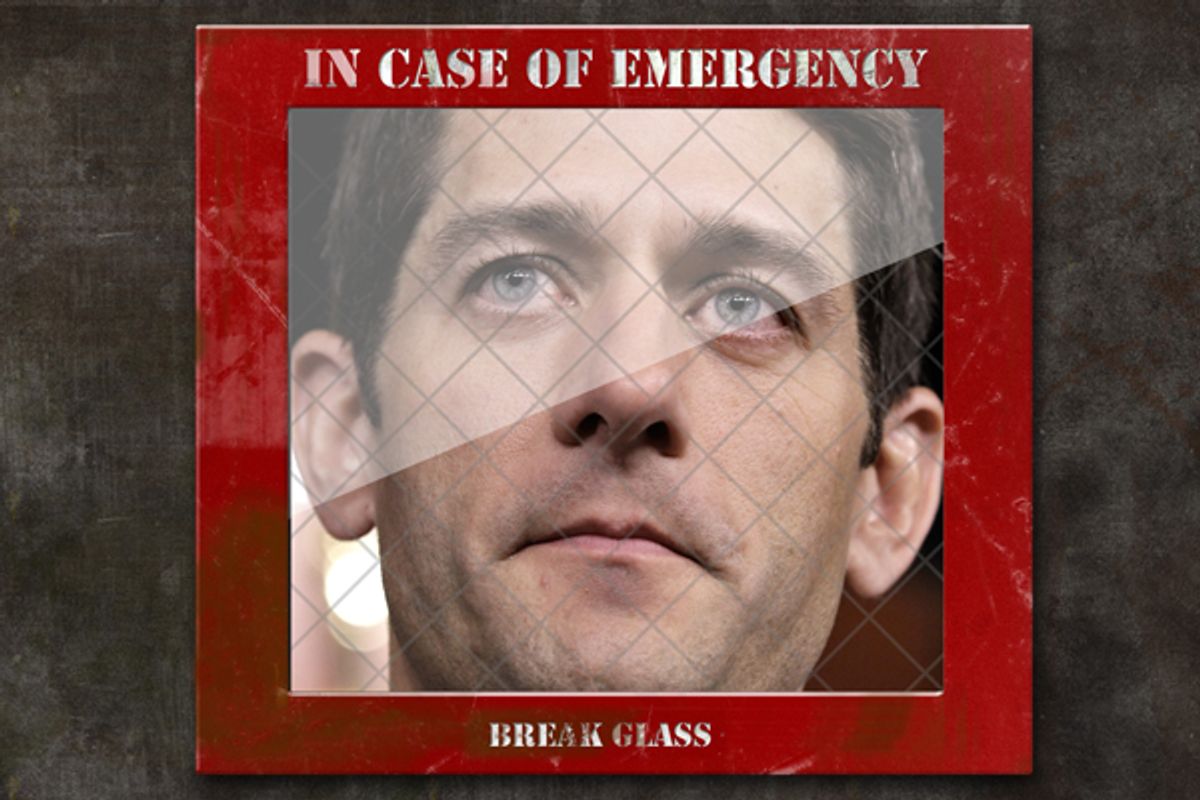 If you're a Republican who is primarily concerned with denying Barack Obama a second term, the Rick Perry campaign rollout has been a disconcerting experience. The Texas governor was supposed to be the great consensus candidate, able to connect with the party base in a way that wouldn't unnerve non-base voters, but so far he's come across as "Bachmann in cowboy boots," as Washington Post conservative blogger Jennifer Rubin put it.

When the Wall Street Journal's editorial page begged for (another) new candidate on Monday, I was skeptical that one would emerge. And I still am, but in the two days since, the reaction of the GOP's opinion-shaping elites to Perry has only turned colder, especially after his Ben Bernanke comments on Monday night. Now there are reports that Wisconsin Rep. Paul Ryan and New Jersey Gov. Chris Christie may both be mulling a late entry, and there's talk of others doing the same.

It's getting awfully late in the cycle for new candidates to begin exploring the race --- probably too late, when you consider the challenge of building a national organization and raising tens of millions of dollars. But with Perry not (yet) living up to his potential there may, at least in theory, still be a void for a true consensus candidate. (It should also be noted that while there aren't any modern examples of "white knight" candidates jumping in at the last minute and winning presidential nominations, this isn't exactly based on much evidence.)

With that in mind, let's look at the names that are being floated as potential late entrants and what they would -- or wouldn't -- bring to the table:

Potential: On paper, he'd have a real chance of uniting the GOP's base and its November-minded elites. He is pro-life (the only pro-life Republican to win a statewide election in New Jersey in the post-Roe era), passes most of the basic GOP litmus tests, and has executive experience. And he's an unusually talented communicator; his national reputation is partly the result of a series of viral videos in which he bluntly articulated conservative views and attitudes in a way that made national Republicans swoon. At the same time, he doesn't scare the party's elites, partly because he's shown the ability to win in a blue state, and also because he hasn't been afraid to draw the line at certain forms of pandering to the base.

Chances he'll run:  There's been an opening for Christie all year and he's adamantly refused to pursue it -- and for good reason. Those who know him say his wife is particularly opposed to the idea of a national campaign -- a sentiment that was possibly reinforced by his recent health scare. He also truly relishes being governor of New Jersey (a job he spent nearly a decade pursuing), and knows that skipping out to run for president could doom his already iffy reelection prospects in 2013. He's also been down this road before, when he immediately sought higher office after winning his first election back in 1994, a decision that resulted in a stint in political Siberia and that nearly cost him his career. But now Jonathan Alter is reporting that Christie is conducting focus groups on a potential '12 bid. If he's changing his mind, he'd better do it fast: A protracted flirtation only figures to hurt his already fragile New Jersey numbers.

Potential: Because he's a House man, Ryan is easy to dismiss. Then again, Michele Bachmann is a House woman, and she's the Iowa front-runner (at least for now). And Ryan is no ordinary House member -- he's the face of his party's austerity movement. House members have had very limited success at the presidential level, but Richard Gephardt did manage to win Iowa in 1988 and Mo Udall, while he could never get over the hump in any one state, was a serious contender for the Democratic nod in 1976. And though he never lived up to his potential, Jack Kemp was a credible player in the 1988 GOP contest,

What's interesting about Ryan is that, as the New Republic's Jonathan Chait put it, "he's extremely good at presenting himself, dishonestly, as a compulsively honest, non-ideological budget fix-it man, and getting the political news media to act as his press secretary." You can see some potential here for the GOP: Ryan has total credibility with the party base and passes all of the usual litmus tests, but he's not easy to caricature as a "flake" and he's not prone to Perry's overheated rhetoric. At the same time, the Medicare overhaul plan he drew up -- which the House GOP, to the delight of Democrats, went on the record this spring supporting -- is an obvious liability. GOP elites may agree with the plan, but they probably recognize how politically toxic it is too.

Chances he'll run: Ryan's office issued a worthless denial of Tuesday's story about his interest in the race, but the practical barriers to entry are probably just too great. While he'd be an intriguing option for party elites, there'd probably be too many doubts about him for them to flock to his side. In other words, Ryan would have an impact on the GOP race, but the odds of actually winning the nomination would be long -- and the possibility of falling embarrassingly short would be very real.

Potential: Umm ... something about 9/11? For what it's worth, Rudy has talked up the idea of focusing on New Hampshire and trying to use that state as a springboard to the GOP nomination. This, he (incorrectly) claims, is the model that John McCain used in 2008. The bigger problem here is that a Rudy campaign wouldn't solve the basic problem the GOP faces. The opening that (maybe) exists is for someone who can unite the base without freaking out the party's elites. How does a pro-choice former New York City mayor with a long history of cultural liberalism fit into this scenario? He doesn't.

Chances he'll run: It's really hard to imagine Rudy would go down this road again, but who knows what's in his head?

Potential: It's clearly there ... for 2016. One of the knocks on Perry is that his voice and style immediately prompt people to think of George W. Bush, his predecessor as Texas governor. So you can imagine the hesitation that GOP elites would have about backing the brother of George W. Bush in 2012. Jeb's situation now calls to mind Hillary Clinton's at this point in 2003, when her name was floated as a potential Democratic white knight (with many of the party's elites worried about the prospects of a Howard Dean nomination). But Clinton didn't nibble and waited four years.

Chances he'll run: Pretty good ... for 2016 (if there's a GOP race then). For now? Jeb seems to understand that it's too soon for another Bush, which is why he's taken pains to stay relevant without giving any indication that he's remotely interested in 2012.

Potential: It was there after the 2008 campaign, when she had the opportunity to build on her mass appeal by making inroads with the national GOP establishment. Instead, she thumbed her nose at her own party, quit her job in Alaska, and became much more of a reality television star than a leading political figure. Her standing in polling has dropped off dramatically in the last few years, even among Republicans, and while she still has a large core of fans (and universal name recognition), a Palin campaign would not be greeted warmly by GOP elites.

Chances she'll run: Good luck reading her mind, but it's probably telling that Palin continues to go out of her way to stir speculation that she might run without ever taking a single step toward  a real, full-fledged campaign. And even if she does, for whatever reason, run, the question remains: So what?

These are the five names that seem to be mentioned the most, and of them only two -- Christie and Ryan -- seem worth keeping an eye on. My bet would be that they both sit it out in the end, but if Rick Perry keeps shooting his mouth off ...