From radioactive waste disposal to a chicken hatchery, the Texas governor's beneficence is an inspiration to us all 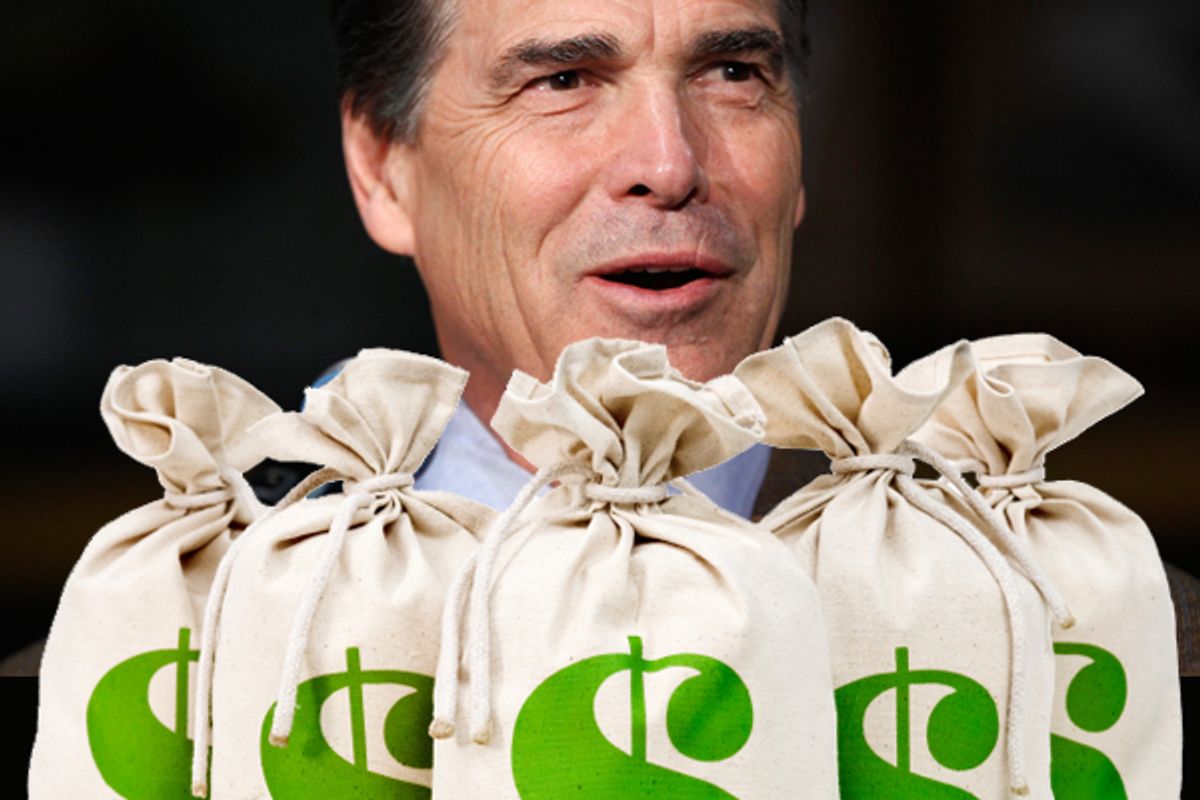 I've got just the ticket for getting America back to work. It's pretty simple, actually! All we need to do is get every unemployed person in the country to cut Rick Perry a check for a couple hundred thousand dollars. Next stop: a new age of prosperity!

Lots of people have a pretty cartoonishly oversimplified idea of how money corrupts politics, so it's nice when that cartoonish oversimplification turns out to be totally 100 percent accurate, as it is in the case of Mr. Perry and the 150 Texans who have given him $37 million over the last decade. The L.A. Times reports what those "megadonors" got for their money:

"They get the same thing that all Texans get," Perry spokesman Mark Miner said to the Times. (Enjoy your lucrative government contracts, everyone in Texas!)

The radioactive waste disposal site was by far the biggest coup. It required approval from multiple Perry-controlled commissions and a new law allowing private companies to own radioactive waste disposal licenses (followed by a law saying only one private company could do so). A team of geologists and engineers even recommended that the license be denied, but the state eviromental agency executive director ordered that the license be granted anyway. That executive director is now a lobbyist for the company that won the license.

As you can see, everyone wins, besides the people getting cancer after the radioactive waste seeps into the groundwater, as the geologists predict it will. (But that is a job-creator, for doctors?) In this unstable world, it looks like sending huge amounts of money to Rick Perry is one of the few reliable investments we've got left. If I had any money to invest, I'd send it to the Perry campaign! (And move to Texas and start a waste disposal company?)

So why not apply that principle nationally? Rick Perry will make the government work for you, as long as you send him money!

If you've lost your job and you're underwater on your mortgage, just scrape together $400,000, send it to President Perry, and you just might end up with a sweet government grant! Or even a job!

Americans, after all, hate the idea of giving a "free ride" to people who don't work hard and play by the rules. So what could be more fair than restricting government assistance to those who both need it and can afford to pay for it?

That is, probably, what our Founding Fathers intended.