Mrs. Rick Perry didn't iron his shirt, and the president's wife be shoppin' 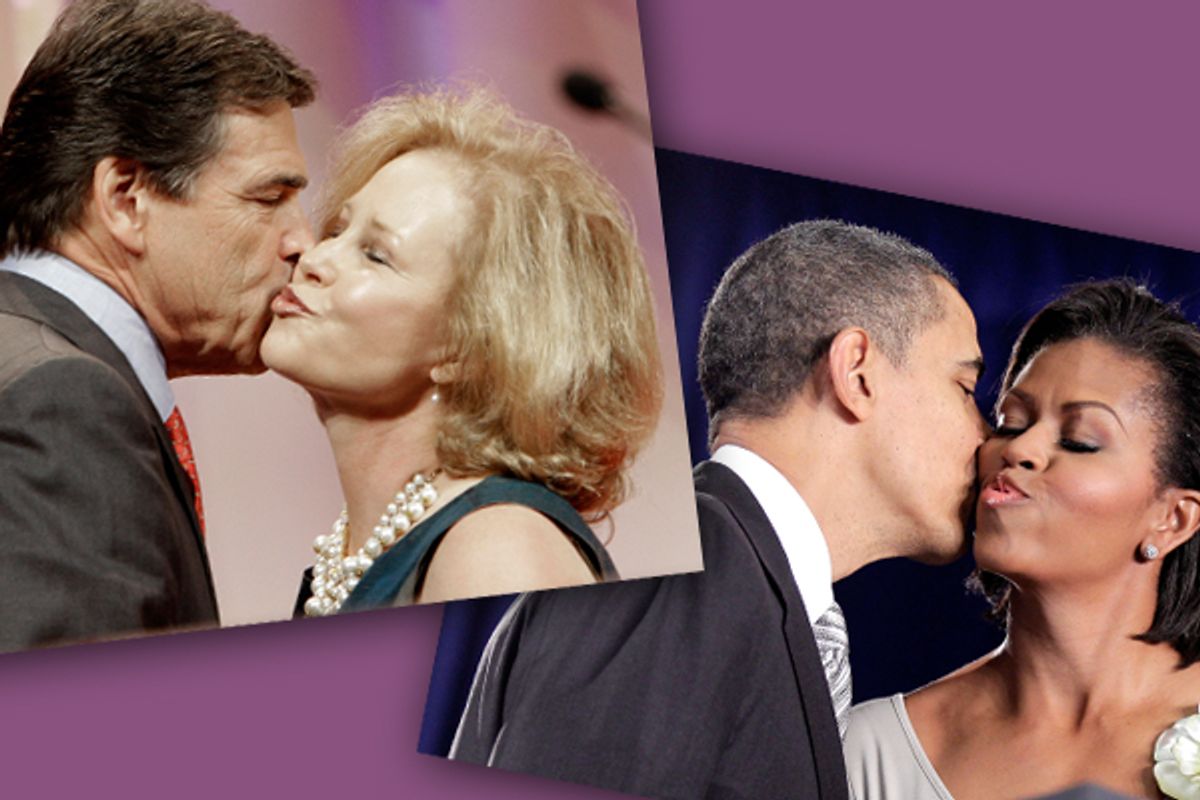 Credit where credit is due: Maureen Dowd, the longtime New York Times columnist whose one joke had worn thin by 1999, had a good line today:

“In my house,” Obama noted, “if I said, ‘You know, Michelle, honey, we got to cut back, so we’re going to have you stop shopping completely. You can’t buy shoes; you can’t buy dresses; but I’m keeping my golf clubs.’ You know, that wouldn’t go over so well.”

In Decorah, he said: “Everybody cannot get 100 percent of what they want. Now, for those of you who are married, there is an analogy here. I basically let Michelle have 90 percent of what she wants. But, at a certain point, I have to draw the line and say, ‘Give me my little 10 percent.’ ”

Maybe Michelle should be the one negotiating with the Republicans.

Barack Obama painting himself as a hilarious schlubby sitcom husband is not as charming and relatable as he thinks it is. Just FYI. I mean, the Obamas are a wonderful, adorable couple who seem to love each other very much, but "boy, my wife, she sure likes to shop!!" is not a good look for the president, or for anyone else.

Here's my question: Is this joke more insulting than the throwaway Rick Perry line that Ben Smith labeled his first "gaffe" earlier this week?

When Texas Gov. Rick Perry took his jacket off for a question-and-answer session in Waterloo last night, he joked about his attire.

"This shirt has a few wrinkles in it; it's not my wife's fault," he said.

Both jokes are too dumb to be deeply offensive, though they're both casually condescending in that way that seems more "harmless" than it really is. Both cheesy jokes are weirdly anachronistic, though Obama's at least tracks to modern sitcom trends (my wife wears the pants, right, fellas?).

To borrow a game introduced to me by my friends John and Molly Knefel, which is more objectionable? Perry's joke is more overtly insulting, but it's one throwaway line, and not a whole routine, making a political point, that the speaker found compelling enough to repeat the following day. So: Obama's joke is worse, according to science. Shame on you, Mr. President!