The congresswoman's staff is unapologetic about pushing, threatening journalists trying to cover her 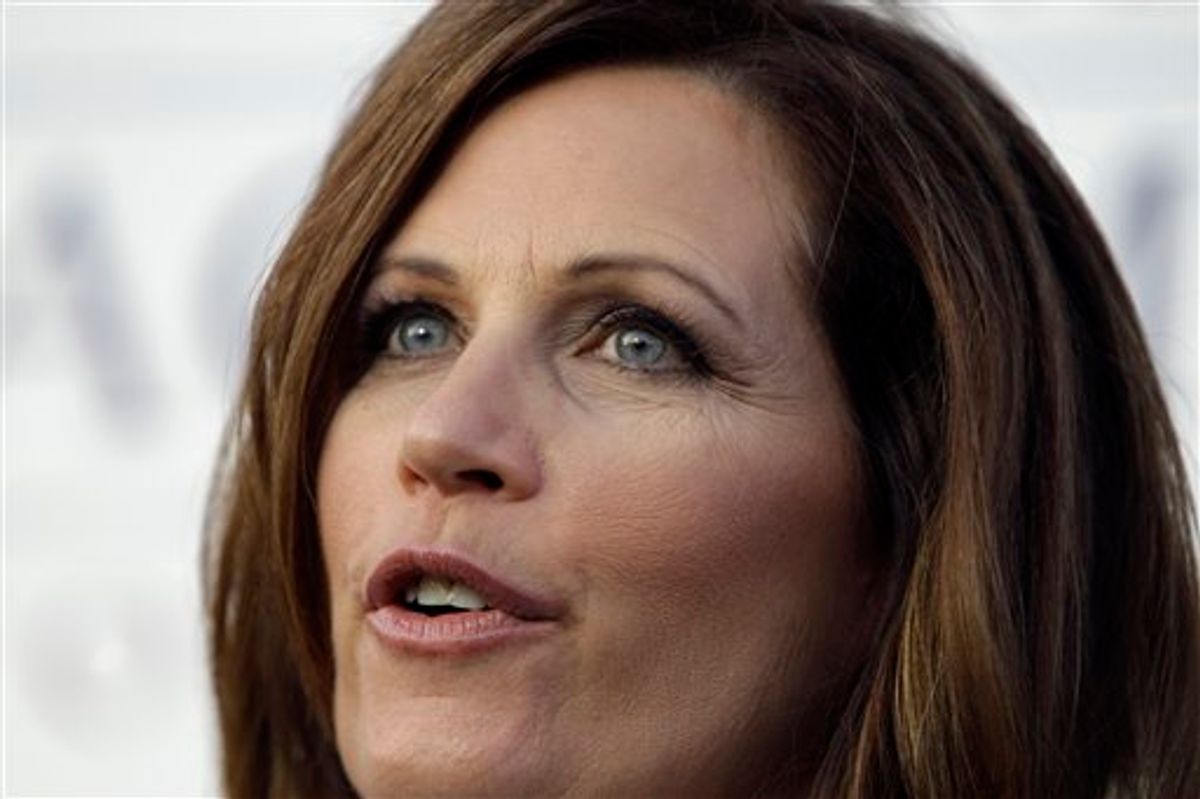 Michele Bachmann's goons spend a lot of time threatening and physically harassing reporters, and the campaign is not particularly apologetic about it, Politico reports today. Bachmann has some aggro old guy -- they claim he's a former Secret Service agent but considering that this is the Bachmann campaign he is just as likely to be a former ice cream truck driver or used sporting goods salesman or just some guy they found on Craigslist claiming to be a Secret Service agent -- who treats the candidate like she's the president in a war zone instead of a marginal celebrity congressperson wandering around Iowa, America's most harmless state. There are also two identical blond "advance" women who pushed poor Don Lemon into a golf cart.

Mr. Special Agent Grabby also threatened to break a reporter's arm. The reporter is both Norwegian and conservative, making him the least likely threat to Michele Bachmann alive.

Flaten, who said he had forgotten his press credential, said he was trying to photograph Bachmann while she talked to Fox and CNN correspondents in Ames on Sunday morning, as well as interviewing her campaign manager Ed Rollins. Flaten said he had met Bachmann earlier -- she’s of Norwegian descent and of some interest to the Norwegian media -- and had a friendly exchange.

On the CNN set, the silver-haired bodyguard asked Flaten, "Are you a blogger?" he said. Flaten responded that he wasn’t.

Then the guard, he said, walked away, came back and gestured toward another man: "This guy will break your arm if you take one step closer," Flaten recalled the silver-haired guard saying.

They are concerned about the candidate's safety, sure, but this is really just a nice little example of how the attitude of apocalyptic paranoia that defines the modern conservative movement can easily lead to aggressive antisocial behavior. Bachmann and her staff are just behaving like rich white guys in Arizona exurbs who won't go to the supermarket without concealed handguns lest they run into one of those marauding "flash mobs" of minority youths that they read about weekly on Drudge. Obama's America is a lawless hellscape with threats around every corner!

Why should Bachmann's staff apologize for acting so aggressively to protect the candidate from imposing toughs like ... Don Lemon? That would be a show of weakness, and by "weakness" I mean "basic decency."

CNN’s Lemon said in an email that he thought the campaign, trying to parlay the straw poll victory into an Iowa surge, may have begun to recognize that aides have crossed the line. Lemon said Rollins called him this week to apologize.

But Stewart, Bachmann’s spokeswoman, retracted the apology in a later interview with POLITICO.

"He wasn’t apologizing for what we did," she said of Rollins. "He said, 'I apologize if you were offended by it.' He stands by 100 percent the actions of our security team."

Good thing they nipped that apology gaffe in the bud. Never apologize for anything! And if you accidentally show some small shred of simple respect for another human being, immediately take it back! Pointless raging dickishness is the way of the true patriot.