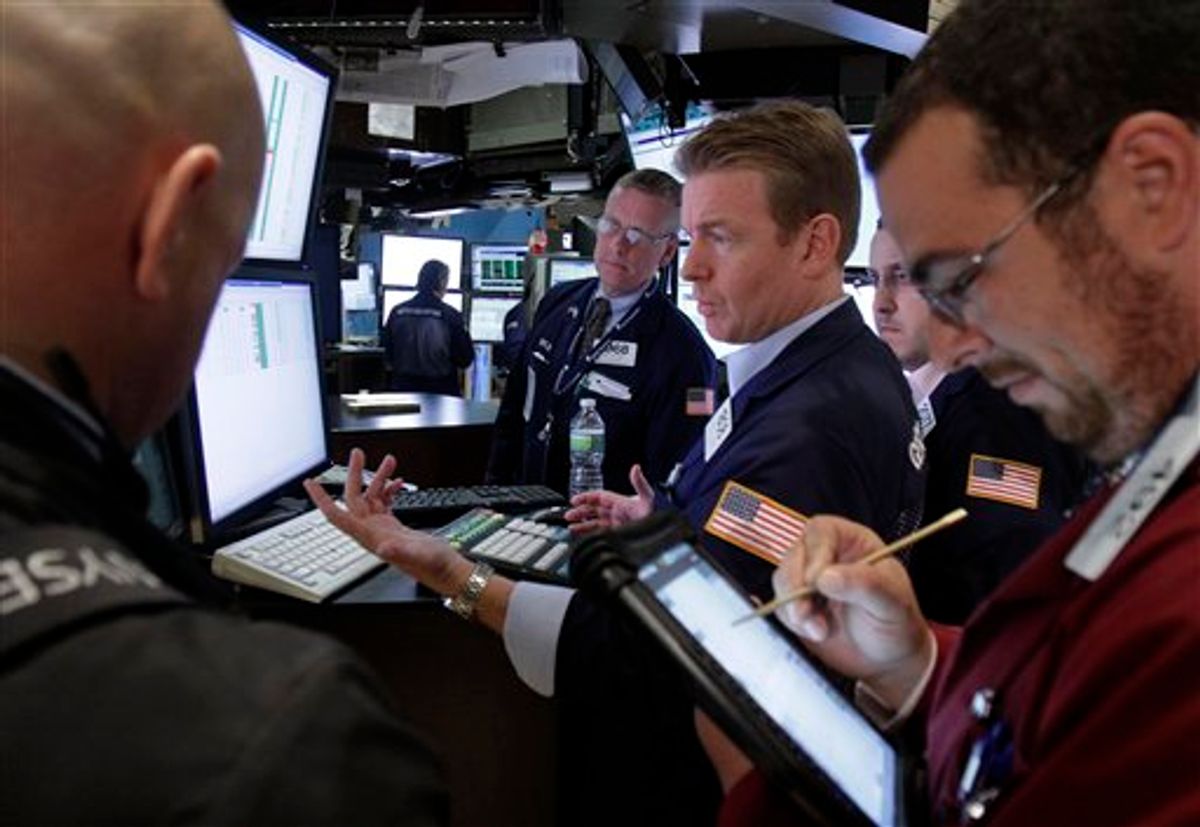 Specialist Michael O'Mara, center, works with traders at the closing bell, on the floor of the New York Stock Exchange Friday, Aug. 12, 2011. A wild week ended relatively calmly on Wall Street Friday as the Dow today gained 126 points to 11,269 and the S&P was up 6 points, while the Nasdaq composite added 15 points. The key averages were down 1 percent or more for the week. (AP Photo/Richard Drew) (AP)
--

European bank stocks tanked Thursday as fears over the anemic pace of the global economic recovery and the institutions' ability to get access to funding intensified.

Most bank stocks across Europe were underperforming in already fragile markets, with British bank Barclays and French bank Societe Generale leading the way down, ending the day with losses of 11.5 and 12 percent, respectively. Germany's Commerzbank fell 10 percent.

Analysts said the plunge seemed to be, at least in part, a reaction to increasing signs that banks are struggling with liquidity -- or access to the cash they need to run their day-to-day operations. Banks typically fund their activities with very short-term loans, and the seizing up of the credit markets where they get those loans was one of the hallmarks of the 2008 crisis. First banks refused to lend to one another, and eventually companies and consumers weren't able to get loans.

A number of European banks are already dependent on last-resort credit from the European Central Bank because of a reluctance among financial institutions to lend to one another since many are heavily exposed to bad debt like that of Greece, Portugal, Italy and other foundering countries.

The European Central Bank said Thursday that one bank had borrowed $500 million a day earlier for seven days through the bank's dollar lending program at 1.1 percent. The bank was not identified.

A request for dollars from the ECB suggests that at least one big bank is having trouble obtaining funds. Analysts said fears about one bank's troubles are enough to spark concerns about the entire industry because traders are already worried about banks' sovereign debt holdings.

"These are worrying signs," said Neil MacKinnon, an economist at VTB Capital in London. "You could think of it as a mini-Lehman moment: There is the risk that a major eurozone bank might be a casualty."

In 2008, the investment bank Lehman Bros. filed for bankruptcy, causing the global credit markets to freeze up almost overnight. Banks refused to lend to each other because they feared more failures and greater losses. Companies and consumers were unable to get loans.

Last week the European Central Bank opened its credit window and let banks borrow as much as they wanted for six months, an unusually long time that gives them more certainty about their funding. The ECB allotted 114 banks euro49.75 billion, more than expected.

In a move that could compound liquidity fears, U.S. regulators said they were stepping up scrutiny of European banks' U.S.-based subsidiaries, according to two people familiar with the situation. Banks are meeting more frequently than usual with supervisors from the Federal Reserve Bank of New York and the New York State Banking Department, said the people, who spoke on condition of anonymity to discuss confidential matters of bank supervision.

Analysts said that regulators are pressing the foreign-based banks to park more of their dollars in the U.S., in case their European parents falter and start draining them. Federal Reserve data show that foreign-based banks are storing more cash here -- $127 billion near the beginning of August, up from $86.1 billion in June.

A similar spike occurred before the 2008 crisis, analysts with Keefe, Bruyette & Woods said in a research note Thursday.

Protecting foreign bank subsidiaries has been a priority for regulators since that crisis. Lehman's bankruptcy filing fed the global panic in part because the legal and financial status of its European operations were not clear to other banks and investors.

Poor economic news in the U.S. also seemed to be driving the flight from banks, which was also seen on Wall Street. Shares of big U.S. banks plunged faster than the broader market indexes. Bank of America Corp. and Morgan Stanley dropped about 7 percent, while Citigroup Inc. skidded nearly 9 percent. The Dow Jones industrial average was down more than 4 percent.

"People are putting the pieces together," said Will Hedden, a sales trader with IG Index.

Some of those pieces are an increase in claims for unemployment benefits in the U.S. and Morgan Stanley's decision to cut its global growth forecasts for 2011 and 2012. Many European banks hold substantial amounts of Greek debt, and have begun to take writedowns on those holdings.

Banks have also been undermined by Tuesday's revelation from German Chancellor Angela Merkel and French President Nicolas Sarkozy that the two countries' finance ministers would come up with a proposal to slap a tax on all trading transactions.

A transaction tax -- a small percentage taken from foreign exchange and share transactions, for instance -- has been proposed as a source of money to pay for bank bailouts but could hurt trading volumes -- a key source of revenue for many of Europe's banks.

If banks and investors had been holding their breath hoping for a panacea from Sarkozy and Merkel, they were disappointed, and Thursday's dive could reflect the realization that there's no easy way out of Europe's problems.

"All we got was more taxes and more bureaucracy and more austerity," said MacKinnon.

A Finnish deal to get collateral from Greece to secure its rescue loans to the debt-ridden country has also raised renewed concerns over Europe's handling of its debt crisis.

Many of Europe's banks, including Societe Generale and Commerzbank, have already taken big writedowns over their holdings of Greek debt and anything that makes Greece's second financial bailout less likely has been viewed with dismay. Commerzbank, Germany's largest commercial holder of Greek debt, wrote off euro760 billion ($1.1 billion) in Greek bonds, all but wiping out its second-quarter earnings.

Last month's decision by eurozone countries to grant Greece a second financial bailout, worth a total of euro109 billion ($157 billion), called for banks, pension funds and other private institutions that hold Greek debt to take their share of the pain.

Daniel Wagner reported from Washington. Pan Pylas in London and David McHugh in Frankfurt contributed to this story.