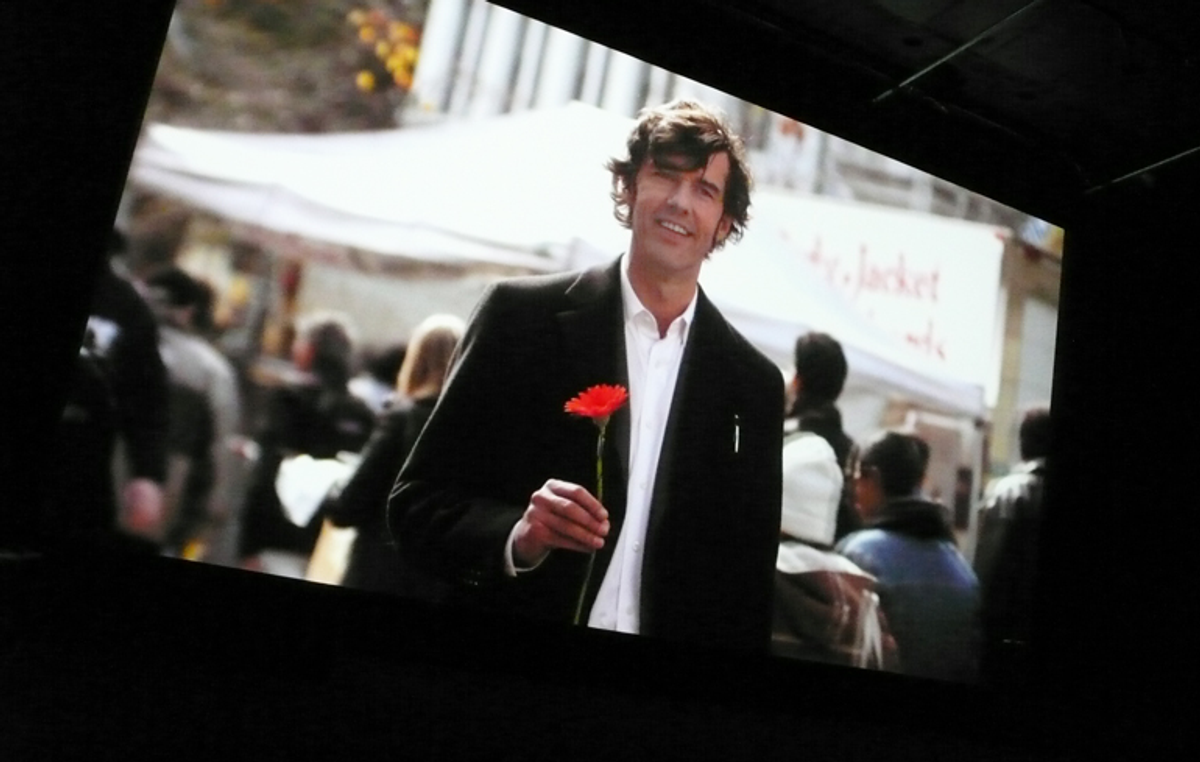 What makes you happy? Is it how much money you make, who your partner is, your clothes or car? What makes you unhappy? Is it the weather, your too-small apartment, things your partner does (or the fact that you don't have one)? Graphic designer Stefan Sagmeister has been busy seeking the (often surprising) answers. And he's making a movie about it with Hillman Curtis, Web designer and director of TV commercials and short films.

Stefan is the guinea pig, the subject of "The Happy Film," "Making a movie about happiness is like making a movie about life," Stefan told a full house of fans at the SVA Theater last Thursday, most of whom had paid $50 to be there -- it was a fundraiser to help finish the movie. "I've learned that 50 percent of happiness comes from your genes," he said, telling a story about the 'giggle twins' who were separated at birth to explain one of his charts. "Only 10 percent comes from life conditions like income, race and physical attractiveness; and 40 percent from your activities and relationships." Yes, the movie is mostly about his life, but he's doing it in a well-researched way he hopes will compel viewers to try out one or more of the happiness-quotient-increasing strategies he's been experimenting with.

The Happiness Chart, as explained by Stefan Sagmeister: "Happiness is not determined by where you live or how much money you make, but by factors like whether you have good friends and enjoy being with them."

I've been following Stefan's career with equal degrees of awe and skepticism since 1999, when I profiled him for Communication Arts magazine. Skepticism, especially, about his "years without clients," during which he went to exotic locales and came back to New York with huge splashes of publicity. Yet when I interviewed him for C.A. and again in 2008 for Etapes, the French design magazine, which asked me to report on his "Things I Have Learned in My Life So Far" book and exhibition at Deitch Projects, he was gracious, warm and open. After attending last Thursday's event, I will delete any remaining skepticism. Every generation has its Leonardo da Vinci. I'm becoming more convinced that Sagmeister is it, and we graphic designers are lucky to have him in our midst. Yes, a few people out there are grousing about how much money they think he makes and how much better his clients are than theirs. Face it: He is brilliant. He is a meticulous craftsman, original and brave. (You didn't cut typography into your body and bleed to make a poster, did you? And you didn't write books half as good as "Things I Have Learned" and "Made You Look," and Hillman's "Creating Short Films".)

"What if you took 'retiring,' the last active part of your life, and interspersed five years of it into 'working'?"

"I was very close to my mother and fell into a depression after she died."

He is honest. He told the audience things like: "I had to do something like make this movie. A friend accused me of coming home from a year in Bali with only a few skimpy furniture ideas." "I ignore 50 positive comments and focus on the one negative one." "I have an addictive personality and used to have an alcohol problem."

Criticisms and unhappy states of mind propelled him into researching the answers to such questions as, "What are the factors that make people happy?" He consulted experts and read psychology books from the pop to the academic, ultimately finding the right balance for himself in "The Happiness Hypothesis: Finding Modern Truth in Ancient Wisdom" by Jonathan Haidt, professor of psychology at the University of Virginia, who was in the audience and is an advisor to the film. Haight's keys to happiness, which Stefan will continue to experiment with and Hillman will film, are meditation, pharmaceuticals, and cognitive behavior therapy. "It's gonna be awful," Stefan predicted of his forthcoming, and first, foray into therapy (with camera crew in the room).

"Could I make myself happy and prove that HAVING GUTS ALWAYS PAYS OFF FOR ME by standing in the greenmarket with a flower and trying to say nice things and pick up a girl?"

After showing a 15-minute preview of the film, which is about 30 percent completed, Stefan and Hillman took questions from the audience:

Q: How was it for the two of you to work together?

Stefan: I didn't realize how difficult it would be to make a documentary.

Q: Did the process of making the film make you happier?

Q: What is your hope for the film?

S: If audience members say to themselves, "I will try that out. It just might work for me."

Q: What are your major obstacles to getting it finished?

H: Making the time between other projects.

S: Not as good looking. [He introduced the good-looking actor in the audience who played him at 29.]

Q: Why did you choose cognitive behavior therapy over other therapies?

S: Research has proven its effectiveness and you can learn it on your own. I like efficient, cheap tricks.

Q: How much money did you raise tonight, and how much more is needed to finish the film?

H: At this rate we'd need to organize 100 more evenings like this. We will not.