The bully the GOP has been waiting for

The cowboy archetype runs so deep in American culture that even George W. Bush couldn't ruin it 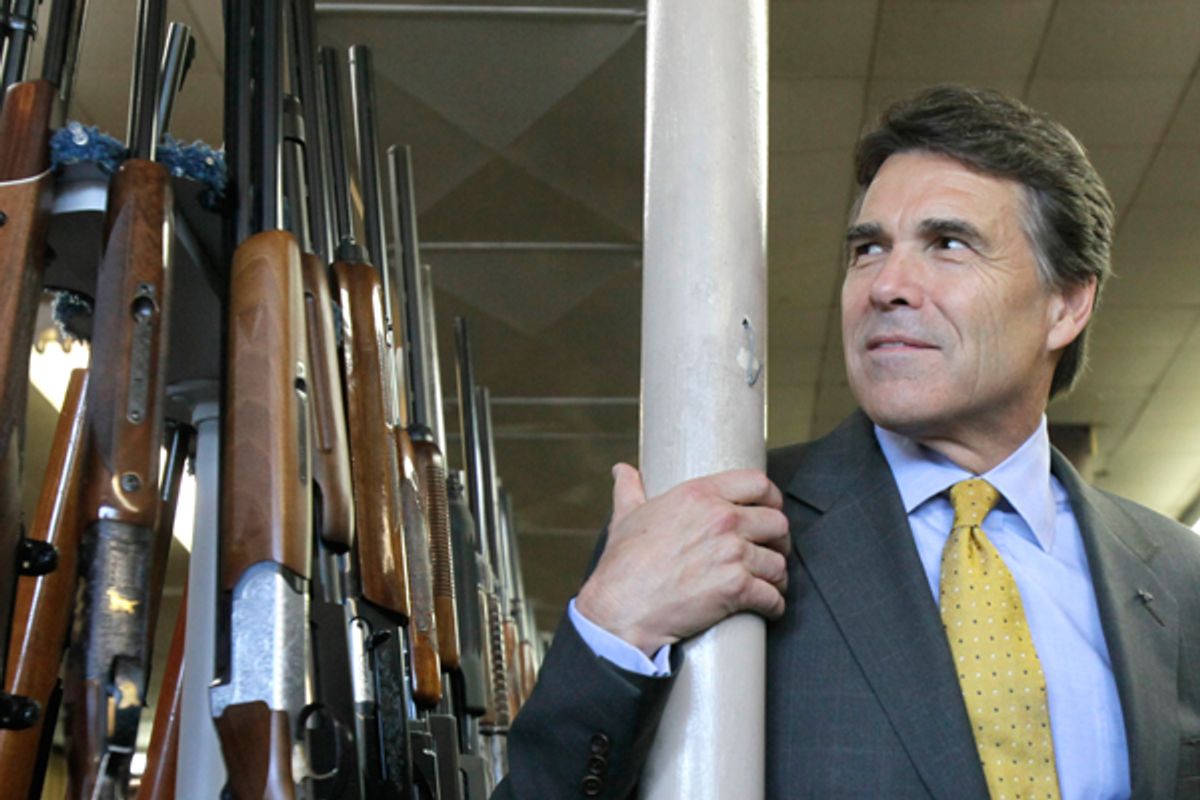 Now that he’s declared his candidacy, odds are Republicans will nominate Texas Gov. Rick Perry for president. They won’t be able to help themselves. If Hollywood put out a casting call for an anti-Obama, Perry would get the role.

Democrats have been chortling about running against yet another swaggering Texas governor. Mother Jones blogger Kevin Drum explains why Perry can’t win:

"He's too Texan...Even in the Republican Party, not everyone is from the South and not everyone is bowled over by a Texas drawl. Perry is, by a fair amount, more Texan than George W. Bush, and an awful lot of people are still suffering from Bush fatigue."

I think this is wrong. The cowboy archetype runs so deep in American culture that even George W. Bush couldn’t ruin it. Besides, the Connecticut rancher was a trust fund poser who rode bicycles, not horses. Deep down, everybody knew that. Now that he’s no longer president, Republicans no longer have to pretend they believe the brush-cutting charade.

Perry, though, strongly resembles the Tommy Lee Jones of "Lonesome Dove." Never mind that while an authentic Texas roughneck, Tommy Lee was Al Gore’s Harvard roommate. It’s the symbolism that matters. Perry also has what appears to be a genuine mean streak. More than anything, Republicans who see a waffling centrist like President Obama as a "socialist" dictator yearn to punish somebody.

Perry may be exactly the bully they seek. Even executing a seemingly innocent man -- almost everybody who’s looked into the case of Cameron Todd Willingham thinks so -- and then openly tampering with a commission charged with investigating the case, makes him a hero to some.

"It takes balls to execute an innocent man," one hairy-chested patriot famously told a focus group. I think that guy sends me weekly emails.

True, Perry has manifest liabilities. If Michele Bachmann can’t make an issue of his ill-fated executive order requiring sixth-grade Texas girls to be vaccinated against sexually transmitted diseases, she’s got no business running. His scheme to build privately owned toll roads across Texas by giving out-of-state corporations the power to seize property by eminent domain represented the kind of crony capitalism that gave Mussolini a bad name.

Perry’s sectarian religiosity and loose talk about Texas seceding might not play among Ohio, Michigan and Pennsylvania voters whose ancestors fought to save the union. Calling Social Security an unconstitutional Ponzi scheme would doom most candidates, although it’s the kind of big talk that thrills them down at the Tea Party corral.

Even so, here’s the kind of anecdote people love about the Texas governor, narrated by Peter Boyer in the Daily Beast:

"One of the photographs that Texas Gov. Rick Perry keeps on his BlackBerry is a portrait of Aurora P. ('Rory') Perry, the family’s black Labrador Retriever, who last year acquired a key role in local Perry legend. The governor and the dog were out for an early morning jog when a coyote suddenly appeared, growling at Rory. Perry, who carries a Ruger .380 handgun in his belt when he jogs, pulled the weapon and shot the coyote dead. When some Austin locals protested that Perry’s reaction was excessive, and dangerous, he shrugged it off. 'Don’t attack my dog,' he said, 'or you might get shot.'"

Just like sissified Austin Democrats to whine about a dead coyote, right? Too bad there were no witnesses to Perry’s derring-do. Because the story strikes me as either completely false or greatly exaggerated -- the kind of tall tale Sarah Palin might invent about herself. (The mighty huntress who needed six shots to hit a caribou that stood grazing like a cow.)

Out in the boondocks we live surrounded by coyotes. We hear them most nights and see them all the time -- normally running, because they’re scared to death of my two Great Pyrenees, whose life goal is to tear a coyote to pieces. One time I saw Jesse, the big male, pile into two coyotes attacking my neighbor’s goat kids. He flung one about four feet, and then started after the second, which took off at warp speed. Jesse can run almost 25 mph. Those coyotes left him like he was standing still.

They’d have the identical reaction to a Labrador retriever. Coyotes are looking for a tasty Chihuahua or house cat, not a fight. They’re exceptionally wary predators that shun human contact. Stamp your feet and holler, as Perry says he did, and they’ll vanish like smoke. My neighbor killed a coyote last winter -- with a scoped deer rifle at 100 yards. He was awfully proud of himself.

Maybe Perry encountered a terminally ill coyote too weak to flee. That’s the only way his story makes sense. More likely, I suspect, he saw one, snapped off a shot and imagined he must have hit it. Every hunter’s been there.

Pretty much, one hopes, the way he imagines being president.