Here we go again: Another big down day for Dow

Despite hopes that the worst was behind the stock market, index closes down more than 400 points 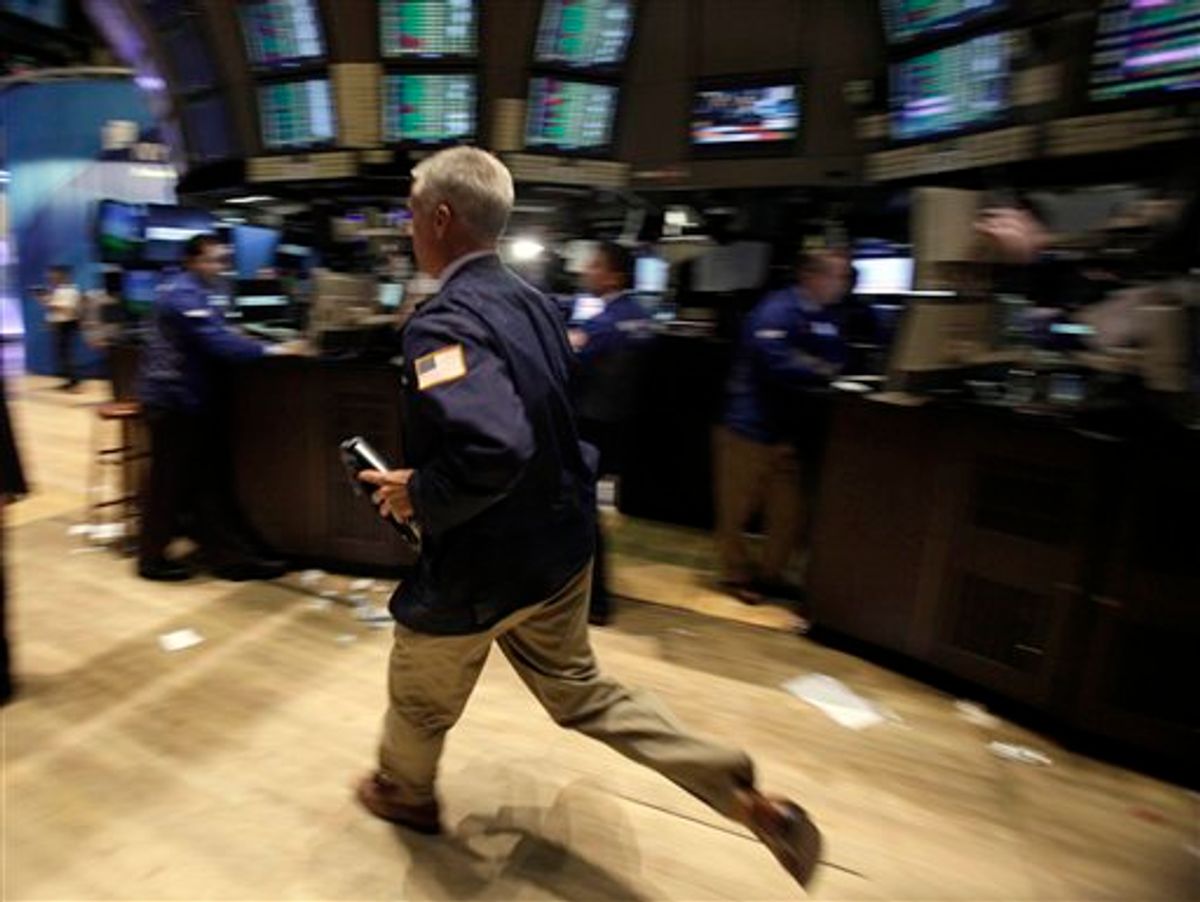 A trader strides across the floor of the New York Stock Exchange at the closing bell, Tuesday, Aug. 9, 2011. The Dow Jones industrial average closed up 429.92 points. (AP Photo/Richard Drew) (AP)
--

Just when Wall Street seemed to have settled down, a barrage of bad economic reports collided with fresh worries about European banks Thursday and triggered a global sell-off in stocks.

The Dow Jones industrial average fell 419 points -- a return to the wild swings that gripped the stock market last week.

Stocks were only part of a dramatic day across the financial markets. The price of oil fell $5, gold set another record, the 10-year Treasury hit its lowest yield, and the average mortgage rate fell to its lowest in at least 40 years.

The selling began in Asia, where Japanese exports fell for a fifth straight month, and continued in Europe, where bank stocks were hammered because of worries about debt problems there, which have proved hard to contain.

On Wall Street, the losses wiped out much of the roughly 700 points that the Dow had gained over five days. Some investors who bought in the middle of last week decided to sell after they were confronted with a raft of bad news about the economy:

-- More people joined the unemployment line last week than at any time in the past month. The number of people filing claims for unemployment benefits for the first time rose to 408,000, or 9,000 more than the week before.

-- Inflation at the consumer level in July was the highest since March. More expensive gas, food, clothes and other necessities are squeezing household budgets at a time when most people aren't getting raises.

-- Sales of previously occupied homes fell in July for the third time in four months -- more trouble for a housing market that can't seem to turn itself around. This year is on pace to be the worst since the late 1990s for home sales.

-- Manufacturing has sharply weakened in the mid-Atlantic states, according to a report from the Federal Reserve. Manufacturing had been one of the economy's strongest industries since the recession ended in 2009, but its growth has slowed this year.

The manufacturing news was especially bleak on an already bad day, said Dan Greenhaus, chief global strategist at brokerage BTIG. He called the Fed report "an atrocious set of numbers."

"That really set the market on its head," he said.

Wall Street and other financial markets have wrestled for several weeks with fears that a new recession might be in the offing. Morgan Stanley economists said in a report Thursday that the U.S. and Europe are "dangerously close to recession."

"It won't take much in the form of additional shocks to tip the balance," they wrote.

Worries about European debt also hang over the market. A default by any country would hurt the European banks that hold those European government bonds, plus American banks that have lent to their European counterparts.

Renewing the fears, The Wall Street Journal reported Thursday that U.S. regulators are looking at the U.S. arms of big European banks to make sure they have enough money for day-to-day operations.

"I don't want to pretend that the market knows what it's thinking about too much," said David Kelly, chief market strategist at JPMorgan Funds. "We live in an environment of sell now and ask questions later. The European market was off very heavily this morning before the markets opened. But honestly there wasn't any news of any substance. We always collect whatever crumbs we can find and point to them."

Asian markets started Thursday's drop. Japan's Nikkei 225 index fell 1.3 percent. The main stock indexes in South Korea and India each dropped a little more, then Europe more than that -- 4.5 percent in Britain and 5.8 percent in Germany.

The Dow is down 13.6 percent since stocks began falling July 21 -- four weeks that have rattled Americans watching their retirement savings and other investment accounts shrivel.

Lee Applegate, a retired sales executive from Cincinnati, watched the latest market plunge uneasily but said he was planning to stay the course with his investments. He and his wife have several retirement accounts.

He remembers the mistake he made in pulling his money out of stocks in early 2009, just before the market started its two-year surge. Since March 9 of that year, the S&P 500 is up 68.6 percent.

"I think things are going to get worse before they get better," Applegate said. "But I'm still going to ride it out."

Last week was one of the wildest in Wall Street history. The Dow moved more than 400 points on four straight days for the first time. But stocks had been relatively stable this week because investors were calmed by strong earnings reports.

The Dow had fallen 76 points Tuesday and risen four points Wednesday -- the first time in nearly three weeks that the average rose or fell by less than 100 points on two straight days.

That ended Thursday. And with stocks down big, money flooded into U.S. Treasurys and gold, both considered safer investments.

The yield on the 10-year Treasury note briefly fell below 2 percent for the first time, hitting 1.98 percent, before rising to 2.07 percent. Low yields show that investors are willing to accept a lower return on their money in exchange for safety.

The price of gold reached yet another high -- almost $1,830 per ounce. Gold keeps setting records, with some investors looking for stability and others simply looking to cash in.

The price of oil fell $5.20 to $82.38 per barrel after the economic reports raised concern among traders that demand for gasoline would fall. One survey this week found Americans have already cut back on gas 21 weeks in a row.

And the average rate on a 30-year fixed mortgage fell to its lowest on record. The rate on the 30-year fixed, the most popular mortgage, hit 4.15 percent -- the lowest in at least 40 years and barely beating the record from last November. The last time long-term rates were lower was in the 1950s, when 30-year loans weren't even widely available.

Nicole Sherrod, a managing director at broker T.D. Ameritrade, said the market volatility has led more clients to put automatic protections in place to sell a stock or an investment fund once it falls below a certain value.

"Our clients are saying that this is not a buy and hold market," she said. "This is a buy and protect market."

In addition, computer systems that are programmed to analyze charts, capitalize on tiny changes in price and execute trades with no human intervention are making the market rougher.

High-frequency trading programs make up about half of the trading volume in a normal market day but 70 percent or more on a volatile one.