Books you can dance to

"One Day" author David Nicholls and others create playlists to enrich the ties between writer, reader and character 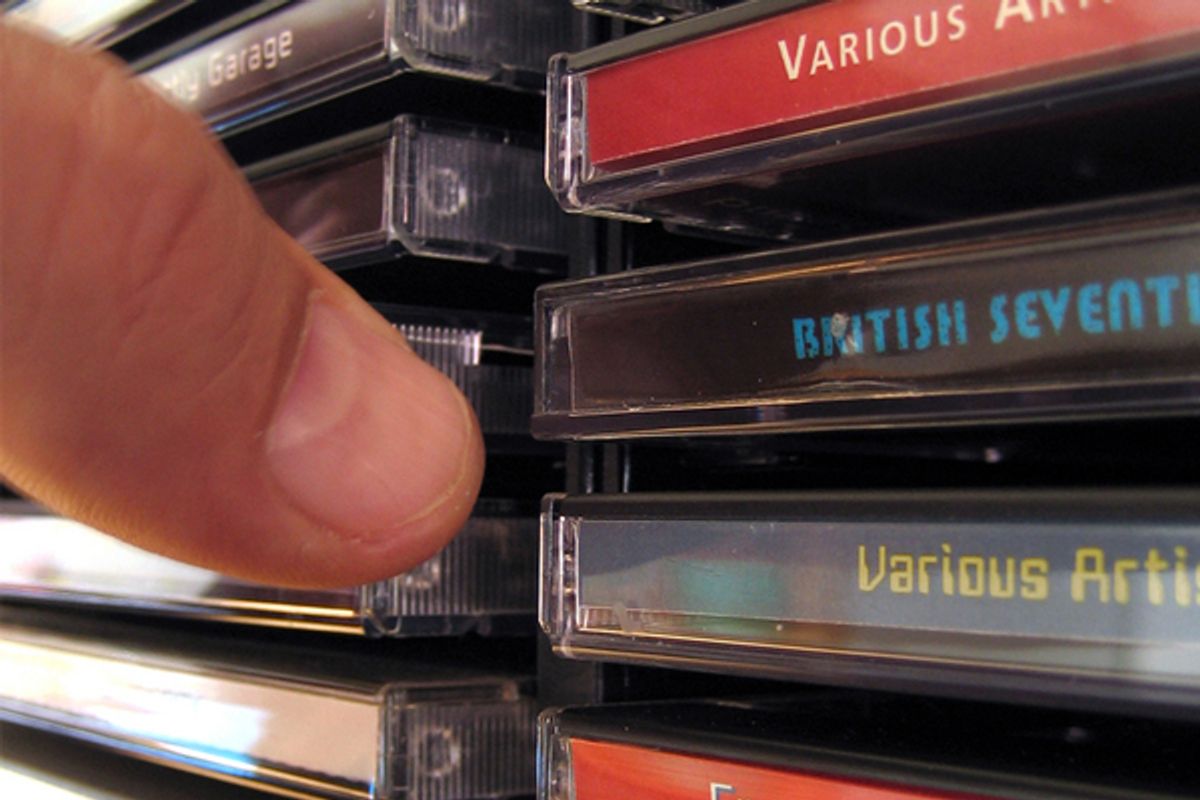 For a music-infused movie, the soundtrack to "One Day" is tasteful but limited -- '90s trip-hop, late-era Tears for Fears, college-radio one-hit wonders, a new Elvis Costello song. It's easy enough to imagine Emma (Anne Hathaway) and Dexter (Jim Sturgess) two 1988 graduates of the University of Edinburgh with a Del Amitri or James poster on their dorm-room wall.

Actually, it might be too easy. A much better sense of Emma's sensibility -- cool Britannia like Prefab Sprout, Cocteau Twins, Billy Bragg and Everything But the Girl alongside English major mainstays Patti Smith, Joni Mitchell and Joan Armatrading -- appears on author and screenwriter David Nicholls' website. Nicholls has imagined the two mix tapes Emma gives Dexter (one from 1989, the other from 2000) and created Spotify and iTunes playlists where they can be streamed or purchased.

Book soundtracks like these have become increasingly popular among authors and readers, especially as the connection between writers and their audience has become more interactive, and as the fast popularity of music-streaming services like Spotify have made it easy to share songs online. But while a song on a movie soundtrack might be there because of a licensing deal or to boost an artist on a label also owned by the studio, author playlists, when done well, can deepen a character and enhance a reader's connection.

"A big part of creating characters for me has always involved working out their tastes -- in clothes, fashion, music," said Nicholls, in an email interview. "I know what the leading characters like, what they wear, what they listen to, what they eat, and making playlists is, I suppose, a form of note-taking, a way of working without really working."

Perhaps the leading popularizer of the author playlist is David Gutowski, who runs the music- and literature-obsessed blog Largeheartedboy.com. Since 2005, in the site's recurring Book Notes column, authors including Bret Easton Ellis, Sloane Crosley, Karen Russell, Aimee Bender and Meghan O'Rourke have shared soundtracks. Hundreds are archived there; since last month, they've been streamable on Spotify.

"Hearing about the music a writer enjoys or envisioned for his characters or book humanizes the author," Gutowski said. "Writers have often told me that thinking about their book in relation to music recontextualizes the work for them, gives them a fresh vantage into something they wrote years ago."

Sometimes, these playlists are part of the writing process. Wesley Stace, who has also recorded a dozen albums as John Wesley Harding, built one for the young composer at the heart of his novel "Charles Jessold, Considered as a Murderer."

"I had to have a very clear idea of what music he liked, and what music he might write. Therefore, I did have to write him an imaginary playlist (if you like) of influence. And then compute the actual music he might have made: to suit both his character and the musical currents. The actual music came afterwards -- written by composer Daniel Felsenfeld -- but was totally required to complete the character," Stace said. "The next novel is about a band, I'm afraid -- a very weird band, making not quite rock music, but a band nonetheless -- and so I've had to steer even more in that direction. And for this band, I am actually writing songs. So they have both their own playlist and, indeed, discography."

Other authors, however, while agreeing that music helps inhabit a character, don't necessarily think it adds anything to the reader's experience. There's some mystery they'd prefer to hold onto, mystery that goes away when the CD racks are revealed.

"I don't think it is all that important for the reader to know the kind of music the character likes," said Dana Spiotta, whose new "Stone Arabia" is about a musician who creates an entire fake history for himself of albums, interviews, reviews, fan letters and more. "As part of my process, knowing things about the character helps it feel authentic to me as I am writing it ... maybe it is a bit like method acting. I hope this eventually comes across as depth to the reader. But I don't think a reader needs to know or recognize any of the references or pop objects. It is there for the internal logic of the character and a certain amount of verisimilitude. If you are writing about obsessives, you have to be slightly obsessive when you are working."

Nicholls might come from an even more obsessive place. Dig deeper on Spotify and you'll find an especially cheesy "One Day" playlist dedicated to Dexter's favorite songs -- as well as a 2,500-song version of Emma's entire record collection that he made to play while writing her scenes.

"I love the idea of it being played at parties, or passed around on Facebook, or someone discovering an artist because of it," said Nicholls, who has gotten notes from readers thanking him for opening their eyes to Jonathan Richman and the Slits. "A few people have found the Emma Morley Complete Record Collection link too, which is a wonderful list to shuffle and dip into -- more jazz, more classical. The temptation is to constantly update it, but I'd probably be pushing the limits of what counts as work.

"It's another part of the portrait you paint when writing," he said. "It's perfect that Patrick Bateman ("American Psycho") should like Huey Lewis and Phil Collins, that Hannibal Lecter should like Glenn Gould's 1953 recording of The Goldberg Variations -- and it's only right that Emma Morley should like the Cocteau Twins, Public Enemy and Joni Mitchell."