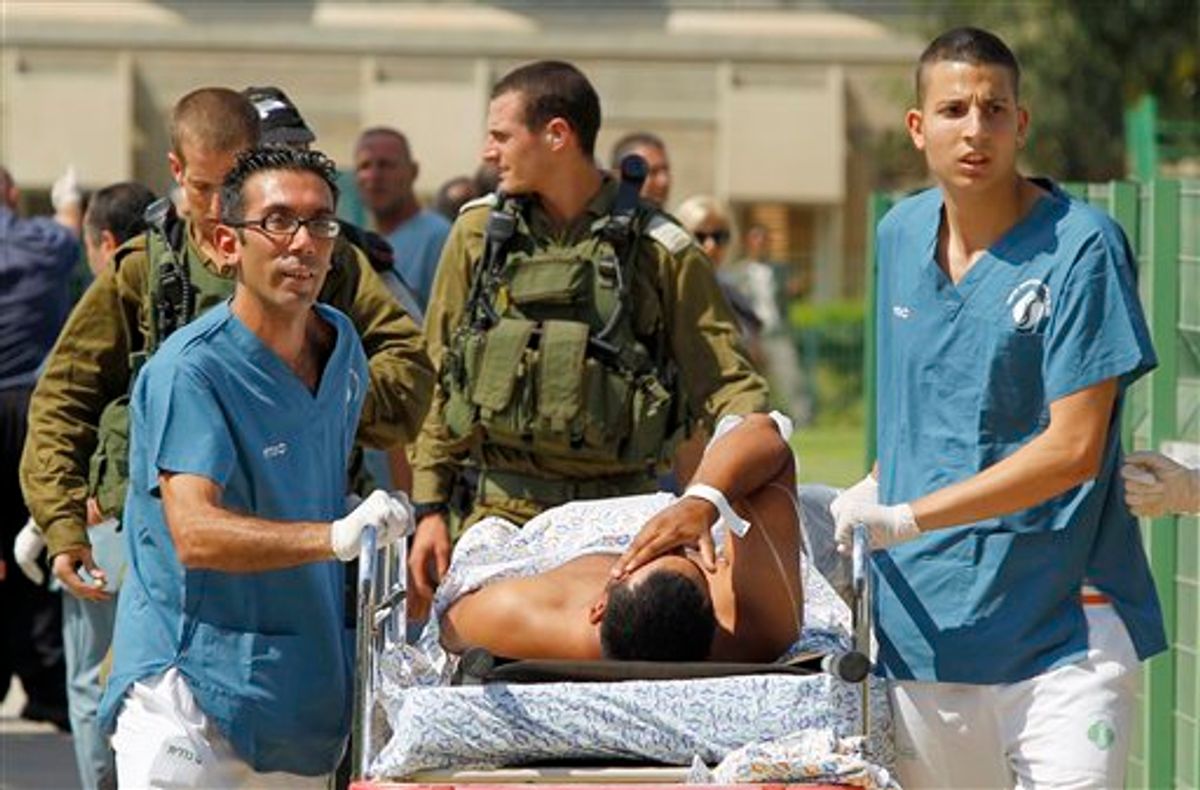 Israeli medics evacuate a person wounded in one of several attacks in the Arava desert, to the Soroka hospitan in Beersheba, southern Israel, Thursday, Aug. 18, 2011. Assailants armed with heavy weapons, guns and explosives crossed into southern Israel from the neighboring Egyptian Sinai peninsula on Thursday, killing six Israelis and wounding at least a dozen more in an audacious string of attacks that stoked concerns about Palestinian militants exploiting the recent instability in Egypt. (AP Photo/Ilan Assayag) ISRAEL OUT (AP)
--

Gaza militants launched barrages of rockets deep into Israel early Friday and Israeli aircraft struck targets in the Palestinian territory in the aftermath of the deadliest attack against Israelis in three years.

Gunmen who appear to have originated in Gaza and crossed into southern Israel through the Egyptian desert ambushed civilian vehicles traveling on a remote road, killing eight people. Six were civilians, and two were members of Israeli security forces responding to the incursion.

The attack signaled a new danger for Israel from its border with the Sinai Peninsula, long quiet under the rule of Egyptian leader Hosni Mubarak. He was deposed in February, and the desert of the Sinai Peninsula -- always restive and controlled largely by Bedouin tribes -- has become increasingly lawless.

On Friday, militants in Gaza launched at least 10 rockets into Israel, the military said. One, aimed at the city of Ashkelon, was intercepted by the new Israeli anti-missile system known as Iron Dome. Another hit next to a synagogue in the port city of Ashdod and wounded six Israelis, according to Israeli emergency services.

Israel's south has been equipped with early warning systems and bomb shelters over years of rocket fire from Gaza, and those measures have helped keep casualties low.

The Israeli military's chief spokesman, Brig. Gen. Yoav Mordechai, said it was "too early" to say that a broad escalation in Gaza was imminent.

"If we see that Hamas is choosing to escalate, we will not hesitate to expand the scope of our actions, respond in strength and exact a price from Hamas," he told Israel Army Radio on Friday morning.

Egyptian officials said three Egyptian security personnel were killed in Thursday's gunbattles. It was unclear if they were shot by the militants or by Israeli soldiers pursuing them. At least five of the militants were killed, the Israeli military said.

Israel responded hours after the border attack with an airstrike in Gaza that killed five members of the Palestinian group that Israel said was behind it, an organization known as the Popular Resistance Committees. The dead included the group's leader.

A spokesman for the group, Abu Mujahid, would not confirm or deny responsibility for the attack inside Israel, but said militants would avenge the killing of the men in Gaza.

Hamas, which controls Gaza, denied any connection with the attacks but hurriedly evacuated all of its security facilities Thursday in anticipation of more Israeli retaliation. Those strikes continued through the night and past midday Friday, targeting what the military said were smuggling tunnels and sites used by gunmen.

Hamas officials said two children, 3 and 13, were killed in the Israeli strikes.

Also Friday, dozens of Palestinians trying to reach the Al-Aqsa Mosque in Jerusalem for Muslim prayers during the Muslim holy month of Ramadan scuffled with police at one of the gates to the Old City. The police were allowing access only to older Muslims in a measure police said is meant to prevent unrest.

The officers used a water cannon to disperse the crowd and made several arrests, police said. No injuries were reported.

The violence in the south focused Israel's attention on its border with Egypt -- 125 miles (200 kilometers) of mountainous desert with no fence for most of its length. Bedouin smugglers ferrying drugs and thousands of African asylum-seekers into Israel have crossed the border almost unimpeded for years.

Thursday's attack -- the deadliest for Israel since a Palestinian gunman killed eight people in a Jerusalem religious seminary in 2008 -- took place near Israel's popular Red Sea resort city of Eilat, currently at the height of the tourist season.

Though the desert outside Eilat showed signs of an increased military presence on Friday morning, the city itself appeared unaffected. Joggers and cyclists were visible along the beach.

Resident Zion Cohen, 53, said the steady stream of African migrants crossing the border with ease in recent years showed that an incursion like the one on Thursday was only a matter of time.

"What bothers me is the unbearable ease with which they cross the border and the knowledge that ... every day, every minute and every hour something can happen like yesterday," Cohen said.

A new fence is currently under construction, and the military says it will be completed by the end of 2012.

The attack came after a prolonged period without negotiations between Israel and the Western-backed Palestinian leadership in the West Bank. That deadlock has led the Palestinians to unilaterally seek recognition of statehood at the United Nations next month, a largely symbolic move opposed by Israel and the U.S.