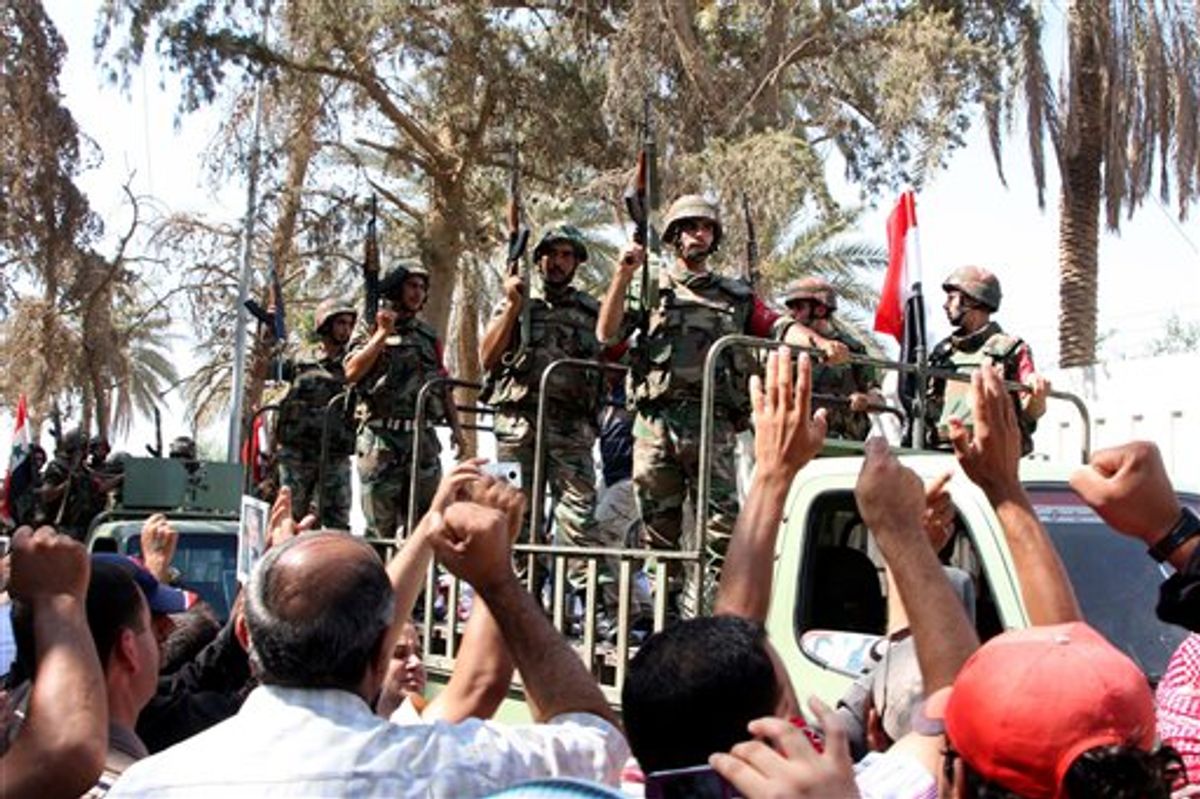 Syrian security forces fired at thousands of protesters who poured into the streets throughout the country Friday, killing at least 13 people one day after the United States and its European allies demanded that President Bashar Assad step down, activists said.

Activists said soldiers, tanks and armored personnel carriers were deployed in restive cities, despite Assad's assurances to U.N. Secretary-General Ban Ki-moon that military and police operations had stopped. The harsh statements by President Barack Obama and European leaders also appeared to have no immediate effect.

"We continue to hear some disturbing reports that we would need to look into," Haq said. "We want to be able to verify indeed that violence has stopped. And, of course, for that to happen we would like to have access for our human rights team."

The London-based Syrian Observatory for Human Rights and The Local Coordination Committees, an activist group, said demonstrations took place in the capital Damascus, the central city of Homs, the southern province of Daraa, the coastal city of Latakia, the eastern city of Deir el-Zour and other areas.

It was impossible to independently verify the death toll because Syria has banned foreign reporters and restricted coverage by local media.

There also was a wave of arrests Friday.

Russia, a longtime ally of Syria, threw its support behind Assad on Friday, saying it doesn't back Western calls for him to resign. Moscow said the Syrian leader must be given sufficient time to fulfill promises of reforms.

Russia's Foreign Ministry spokesman Alexander Lukashevich said Assad has already made some steps toward reform, including lifting the decades-old state of emergency and issuing a decree allowing peaceful demonstrations.

On Thursday, Obama said Assad has overseen a vicious onslaught of his people as they protest for freedom. It was Obama's first explicit call for Assad to step down.

Obama said Assad's calls for reform ring hollow while he is "imprisoning, torturing and slaughtering his own people." Obama also signed an executive order that gives his administration authority to impose sweeping new sanctions on Syria intended to further isolate Assad.

The leaders of France, Britain and Germany issued a statement saying Assad should "leave power in the greater interests of Syria and the unity of his people."

Friday's shooting came three days after troops finished a four-day military operation in Latakia mostly in area in and around a Palestinian refugee camp, forcing thousands of refugees to flee.

The U.N. agency that aids Palestinian refugees said Friday they have located about 6,000 of the 7,500 refugees displaced by the fighting. The agency has been helping them with cash grants for food, medicine and accommodation.

"Many, particularly the children and women, are traumatized and in a poor condition," said agency spokesman Chris Gunness. "The refugees are too frightened to return to their homes."

Protests also erupted Thursday night -- part of a growing trend of evening protests when security forces tend to thin out. The observatory and the LCC said shootings on Thursday killed one person in a Damascus suburb and another died of his wounds early Friday in the central city of Homs.

Syrian state TV said gunmen shot dead one policeman and wounded four in the Damascus suburb of Harasta while four policemen were wounded in Inkhil on Friday.

Rami Abdul-Rahman, who heads the observatory, said there was wide security deployment including armored personnel carriers.

"I've seen soldiers walking through the streets of the city," said an activist in Homs who asked that her name not be mentioned for fear of government reprisals. "But I can't hear gunfire, and I don't believe they are shooting."

Assad is coming under mounting criticism for his crackdown on a 5-month uprising. Human rights groups and witnesses accuse Syrian troops of firing on largely unarmed protesters and say more than 1,800 civilians have been killed since mid-March.

Activists posted an amateur video online Friday showing two soldiers in uniform slapping and kicking about a dozen detainees inside a bus and forcing them to chant "our souls, our blood we sacrifice for you Bashar," and "God, Syria and Bashar only."

The Associated Press could not verify the videos.

In a report released in Geneva, a U.N. team said the violence in Syria should be referred to the International Criminal Court. Crimes against humanity are considered the most serious of all international human rights violations after genocide.