What are Murdoch's American misdeeds? 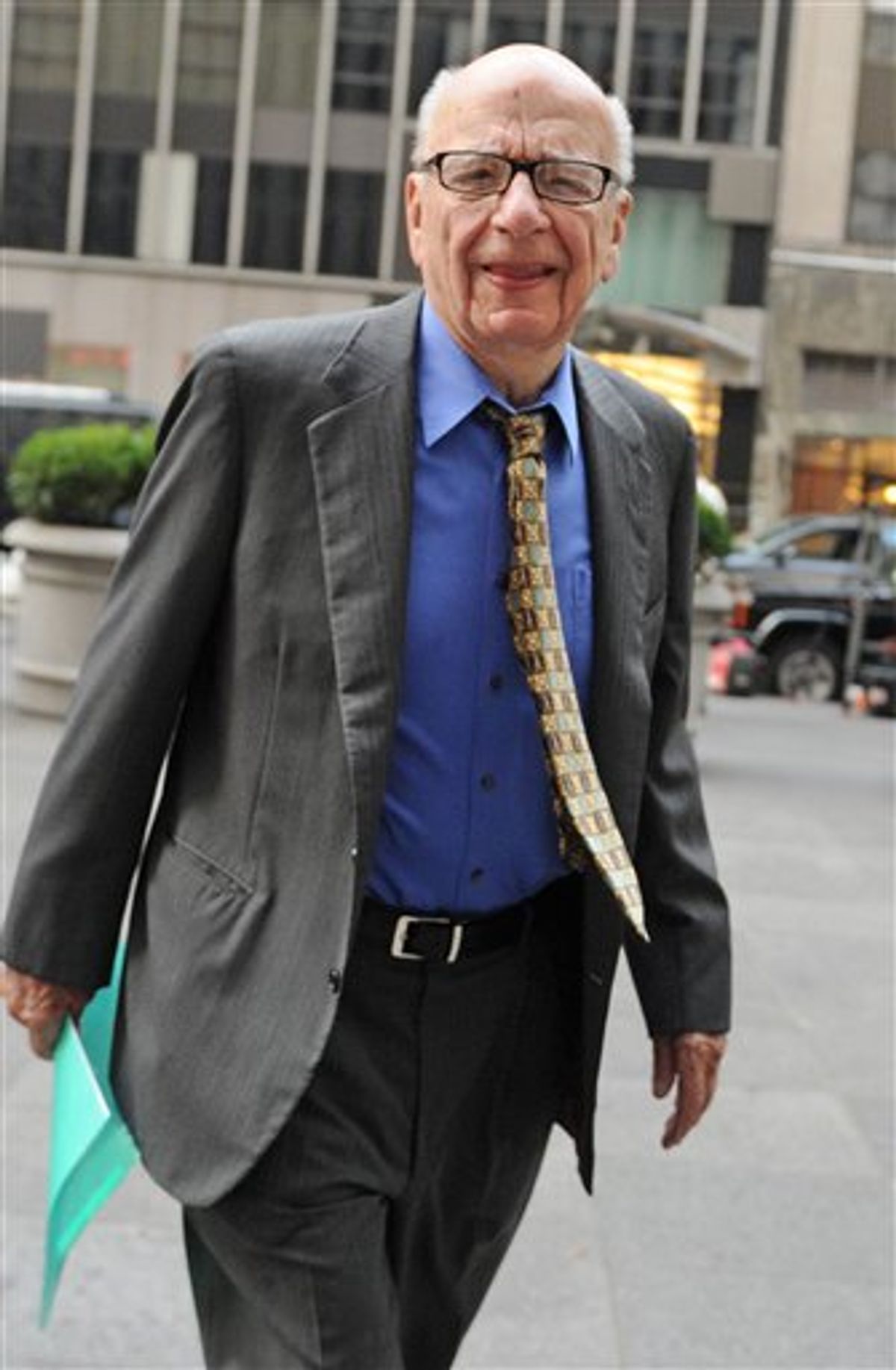 LONDON -- In Britain, the phone hacking scandal at the heart of Rupert Murdoch's media empire is a yarn that seemingly never stops unleashing juicy new details.

As the week began, a letter emerged alleging that senior News Corp. editors routinely discussed phone hacking -- suggesting that executives likely knew about their newspapers' illegal eavesdropping on voicemail messages of celebrities, politicians and crime victims. That revelation called into question whether Murdoch's son James, a senior executive, misled Parliament in his recent testimony, when he said he was unaware of the practice.

Then on Thursday, U.K. officials arrested a Hollywood correspondent for News of the World. The reporter had worked as the paper's Los Angeles based editor. That brought the scandal tantalizingly close to U.S. law enforcement, although the Guardian indicated that the alleged misdeeds took place in the U.K., before the suspect had arrived state-side.

Still, the latest news raises a key question: Have the same tricks been used in the United States? Were News Corp.'s U.S. outlets, such as Fox News and the New York Post, involved as well?

So far, no arrests or allegations have been made in connection with these media organizations. But one could be forgiven for having suspicions.

The transgressions at the now-defunct News of the World tabloid have been blamed on a culture of licentious journalism, driven by Murdoch's voracious appetite for scoop-driven sales. And Murdoch has long pollinated his U.S. media operations with staff plucked from the very U.K. titles now under scrutiny. So who's to say these trusted cohorts didn't pack phone-hacking skills along with their valued noses for news?

Indeed, few people seemed surprised when the Daily Mirror (a rival to Murdoch's Sun tabloid) reported last month that the News of the World -- which by this point had admitted to accessing the voicemail of a murdered British schoolgirl -- had hacked the cell phones of 9/11 victims.

That dubiously-sourced claim, however, has now largely been discounted, despite an FBI investigation. And observers say there is little likelihood identical crimes were committed on American soil.

Instead, however, News Corp. faces a litany of other accusations in the United States, ranging from credible allegations of computer hacking to the more amorphous charge of "Murdochizing" America through sleazy influence-peddling deals with politicians.

One of the biggest headaches for Murdoch has been the costly claim that News America Marketing, a highly-profitable subsidiary of News Corp., hacked in the computer databases of minor rival Floorgraphics Inc. and stole business strategies and data.

Floorgraphics took News America to court in 2009, but settled mid-trial. The company was then bought out by News America for an undisclosed sum, said to be far in excess of its estimated value.

Another case saw News Corp. shell out $665 million to silence two other rivals, Valassis Communications and Insignia, after they accused News America of abusing its market position in violation of anti-trust laws.

"Floorgraphics threatened to sue and News Corp. turned around and said 'don't sue, we'll buy your company' -- this is very typical of the approach and philosophy that Murdoch instills throughout the company," he told GlobalPost.

There are also parallels here with events in the U.K. where News Corp. executives, including Murdoch's son James, have authorized payoffs to phone-hacking victims (while maintaining they had been unaware it was taking place.)

Likewise, just as Murdoch has tried to resist throwing trusted lieutenants such as former News of the World editor Rebekah Brooks to the wolves, News America's CEO Paul Carlucci not only retained his position but was also appointed publisher of the New York Post.

Such parallels seem to have raised alarm bells. Apparently prompted by the trouble Murdoch faces on the other side of the Atlantic, the U.S. Justice Department has launched its own investigation into the computer-hacking allegations.

Bibb predicts Murdoch will escape unscathed, just as he has from most of his brushes with U.S. legislators. This persistent immunity, according to journalist Frank Rich, can be attributed to the media mogul's relentless pursuit of friends and browbeating of foes in high places.

In an article printed last month in New York Magazine, Rich accused Murdoch of "hacking" America not via telephones or computers, but through desensitizing the public to his manipulation of the country's political morality -- what he calls "the Murdochization of America."

This, he argues, is characterized by the numerous prominent political figures that are now or have once been in receipt of News Corp. pay checks. Fox News, for instance, has counted Sarah Palin, Newt Gingrich, Mike Huckabee and Rick Santorum among regular paid contributors.

Rich wrote: "We've become so inured to Murdoch tactics over the years -- and so many people in public life have been frightened, silenced, co-opted, or even seduced by them -- that we have minimized his impact exactly the way his publicists hoped we would, downgrading News Corp. misbehavior merely to tabloid vulgarity and right-wing attack-dog politics.

Bibb cites the political support Murdoch has relied on when navigating stringent regulations over who can own newspapers and broadcast media in the States. "Murdoch is very famous for buying votes when he needs them," he said.

As in the U.K. prior to the hacking scandal, Murdoch's ability to achieve his aims in the U.S. so readily is partly the fault of the wider media community (with the exception of the New York Times) in failing to take him task, Bibb added.

"Murdoch is not the bogey man of a public figure here that he is in the U.K.," he said. "People are much more hostile towards the right wing politics of Fox News than they are against Murdoch, but that's not because of anything illegal, just its cultural and political bias.

"People expect it, they say: 'That's News Corp., that's Murdoch -- of course he's going to be extremely right wing, but he's not breaking any laws.'"