The GOP candidates have no time for your "science," scientists

Your Republican 2012 contenders -- with one lone, unelectable exception -- choose God over facts 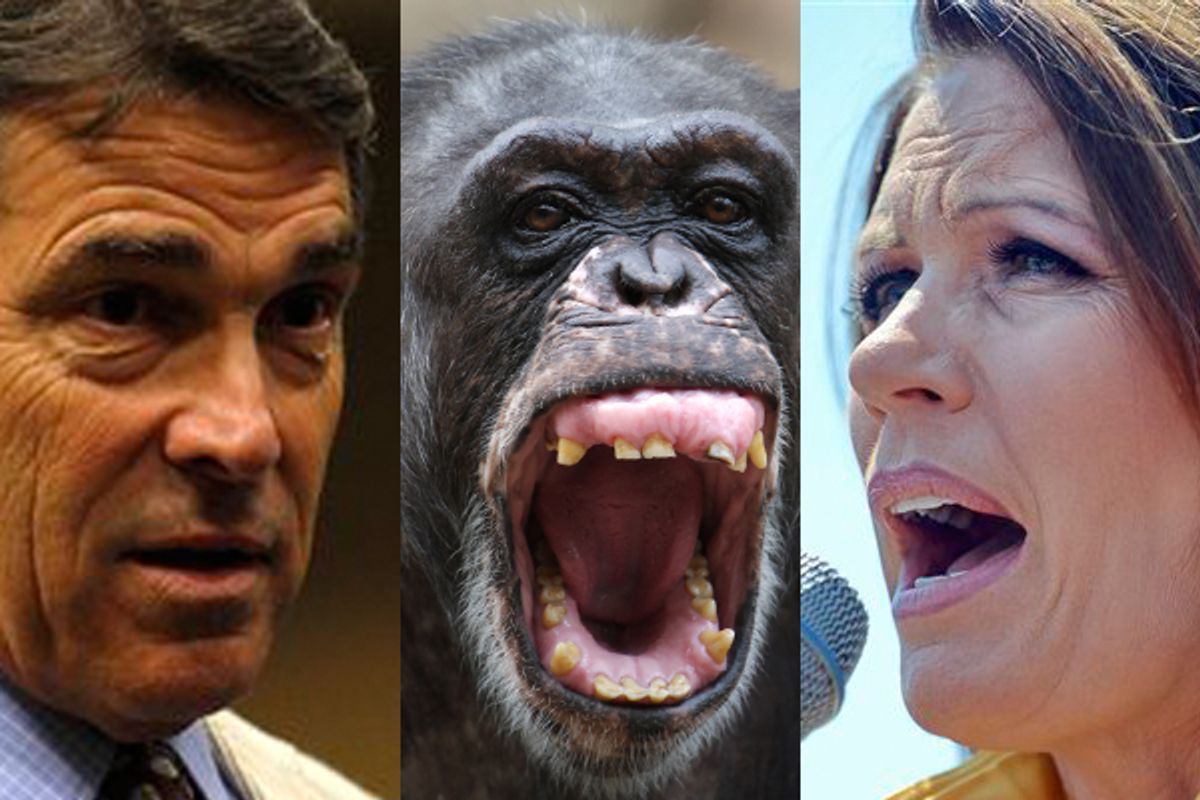 Jon Huntsman has easily won the "liberals on Twitter" primary by announcing that he ... believes in evolution, a theory that is almost universally accepted by scientists and rejected primarily by people looking to preserve the myth that every word in the self-contradictory, partially incorrectly translated, and occasionally quite ridiculous ancient scriptures of the Jewish and Christian faiths is literally true. (Huntsman also said he likes Captain Beefheart, which handily won him the "aging dudes with big vinyl collections" primary.)

It's only remarkable that a well-educated prominent political figure believes in a nearly century-old scientific consensus because many other members of the political elite don't. Huntsman's tweet was prompted by Rick Perry telling a child that he has his doubts about evolution.

"I hear your mom was asking about evolution," Perry said today. "That's a theory that is out there -- and it's got some gaps in it."

Perry then told the boy: "In Texas, we teach both creationism and evolution. I figure you're smart enough to figure out which one is right."

Yep, that's how schools work. You tell kids some things that are true and some things that are made up and you trust that the children will be "smart enough" to figure it out. "America's first three presidents were George Washington, John Adams and the Green Lantern. Good luck on your AP History test."

Here we are in 2011, and we are still daily relitigating the Scopes Monkey Trial, and indeed some not insubstantial number of grade school graduates are still under the impression that "evolution" means "my grandpa was a monkey." Huntsman's acceptance of evolution is proof that he's a joke candidate not worthy of coverage, actually. (Even blue state "moderate" Chris Christie has his doubts..)

Mitt Romney, of course, used to believe in evolution (or at least natural selection controlled by God, the mildest form of "intelligent design"), because he used to govern a very liberal state that contains a lot of well-educated people. But he used to believe a lot of things. Now, his thoughts have ... "evolved."

Michele Bachmann -- well, she became prominent in local Minnesota politics running for school board on an anti-science platform. She has actually slightly moderated her language on the subject, as she toned down the end times Dominionist language a bit upon entering national politics. (You can trust Michele Bachmann to tell your kids the truth -- she used to call herself a doctor!)

Newt Gingrich used to be fine with it, too, though he doesn't bring it up much, now. (Ron Paul thinks it's irrelevant.)

And this is just evolution. Global warming, or anthropogenic climate change, is a lot more contentious, because certain powerful industries have a powerful financial interest in denying it. On that one, well ... Newt Gingrich used to believe in it. Tim Pawlenty apologized for agreeing with it before. Mitt Romney believed in it before, too. Rick Perry believes in curing droughts by praying. God help us.