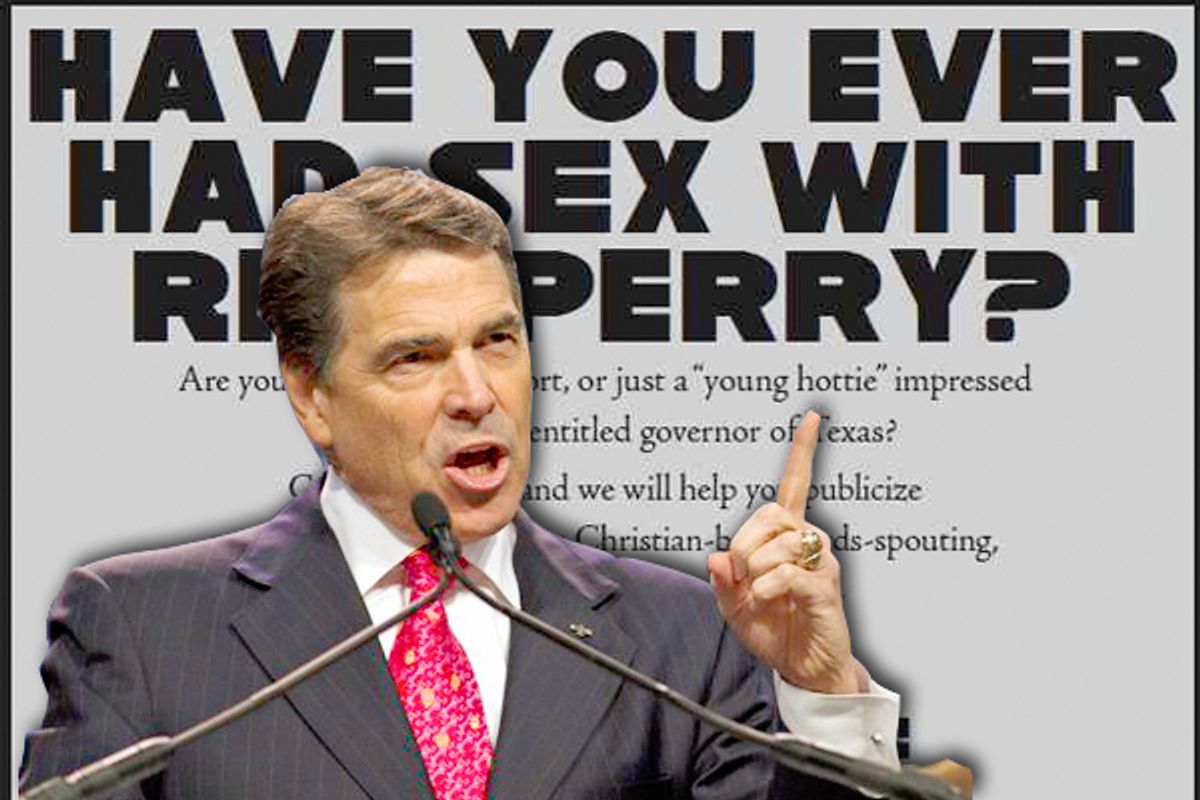 A Texas Ron Paul supporter's attack on Rick Perry -- in the form of a full-page newspaper ad seeking people who have slept with the presidential candidate -- got a lot of national media attention yesterday after I published a story about it.

Now it seems the Perry campaign is going on the counter-offensive against the Austin man who placed the ad, self-employed investor and political gadfly Robert Morrow.

The San Antonio Express-News reports that the Perry camp passed along a dossier on the writings of Morrow, whom the campaign calls "not stable":

Before taking any of Robert Morrow’s rantings seriously, please take a moment to review some of his other deeply held convictions. Below are just a handful of the many colorful theories of Robert Morrow, at a glance:

According to Robert Morrow, George Herbert Walker Bush tried but failed to murder Ross Perot in the 1992 campaign.

In the 1992, there was a Texas President, a desperate and dangerous George Herbert Walker Bush, supported by the CFR, the intelligence agencies, military contractors and the oil industry - who feared exposure of his criminality and was on the verge of political and personal annihilation. Ross Perot was well aware of the gargantuan Bush/Clinton/CIA drug smuggling of the 1980's." ...

“His current obsession is Texas Governor Rick Perry,” the document read. “An unmarried single guy in his mid-40s without a job, subsidized by his family inheritance, Robert Morrow has all the time and resources he needs to carry out his latest paranoid crusade. Based on the number of hits that pop up on google when you search for his name or email address, he is easily devoting many, many hours every day propagating his libelous slurs against Rick Perry.”

The fact that the campaign is taking the time to respond shows it views Morrow as a real threat. Given President Obama's experience with various conspiracy theories (say, Birtherism) that's a reasonable position for the Perry campaign to take.

Adam Smith of the St. Petersburg Times profiled Morrow, who is a Princeton grad, back in 2008:

Morrow, a perpetually indignant, single 43-year-old, pretty much devotes his life to hating the Clintons and spreading wild, unsubstantiated allegations about them. ...

Strapping, 6-foot-4 and with an Alabama drawl, Morrow lives in a suburban Austin home with a lot of Ron Paul campaign material, a prominently displayed Hooters calendar and an 8-foot tall shelf packed with Clinton books. In many, he has meticulously underlined passages he deems important and jotted margin notes and stars.

Meanwhile, here (click to listen) is a sample of the sort of anti-Perry voicemail Morrow has been leaving for reporters and others, passed along by a source.

As Dave Weigel notes, "The Perry rumor mill has an ambassador now."