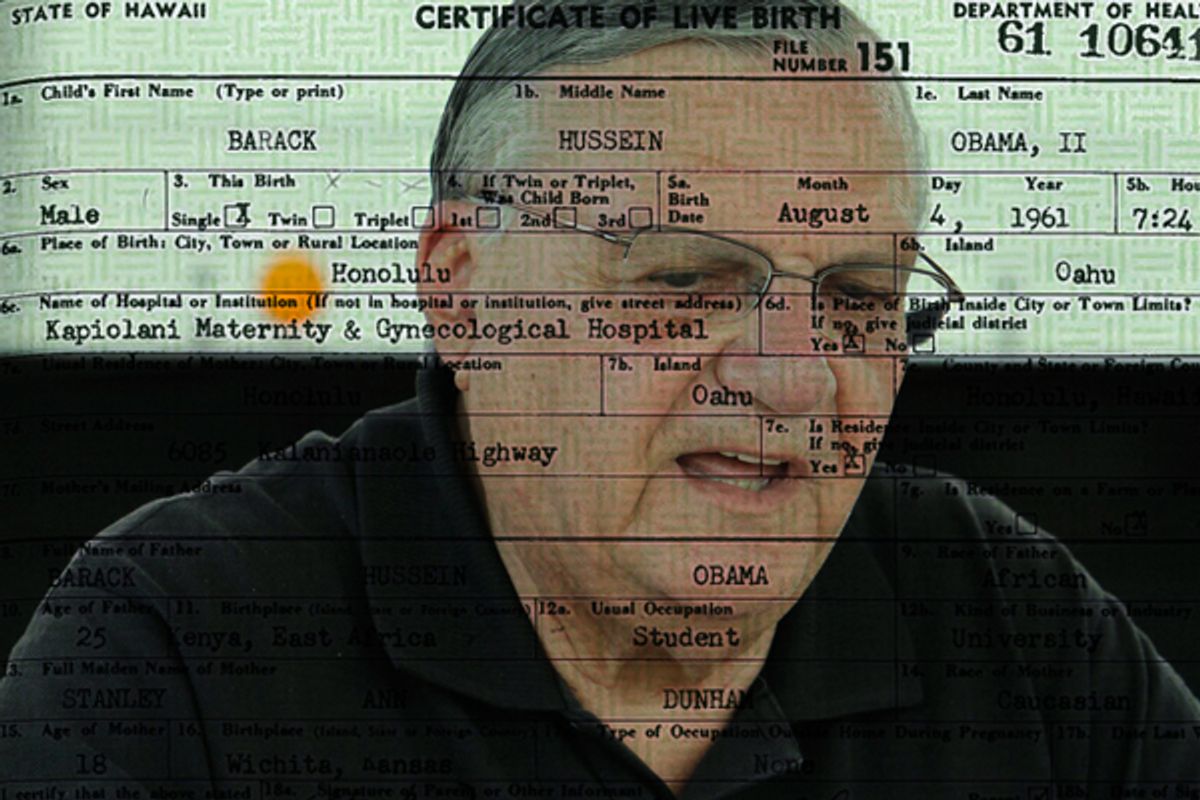 Sheriff Joe Arpaio might be a birther, now. A quasi-birther, at least. WorldNetDaily "broke" the "news" that Arizona's most civil rights-disregarding lawman "has agreed to examine evidence challenging the validity of Barack Obama's purported long-form birth certificate in a determination of the president's eligibility for the 2012 election ballot." Which certainly sounds like a very good use of the resources of the Maricopa County Sheriff's Office, right? There is even a picture of Arpaio with Jerome Corsi, author of "Where's the Birth Certificate," a book whose title question was answered twice before publication:

Arpaio told the tea-party leaders that he expects political pressure, but he pointed out that as the chief law enforcement officer of Maricopa County, he's taken an oath to respond to citizens who approach him about enforcing the law.

Maricopa County Sheriff's Office Lt. Justin Griffin confirmed to WND that Arpaio is "waiting to receive all the documentation and all the investigative material from Dr. Jerry Corsi, and then he will look into the matter and compare it to the Arizona revised statutes."

Ha. Ha ha ha. He picked a great time to join this particular conspiracy theory, months after the president released his original birth certificate, to complement the first, perfectly legally valid one he released years ago. In August of 2011 you really have to be a colossal moron to still believe that the president's birthplace and presidential eligibility are seriously in doubt. So kudos, Sheriff Joe, for either being a colossal moron or being too scared of a small minority of colossal morons to actually say the truth, which is that Barack Obama was born in Hawaii, which is at this point better documented than Arpaio's own citizenship status. (He looks kinda French, to me.) Even Governor Jan Brewer is smart enough to reject birtherism, and she can barely form sentences.

Arpaio "clarified" his stand by... confirming that he's looking into it.

"What I have agreed to do, contrary to some published media reports, is simply look at the evidence these people have assembled and examine whether it is within my jurisdiction to investigate the document's authenticity," Arpaio said in a written statement Friday.

In the time it took you to write that statement, Sheriff Joe, you could've concluded the investigation. With one Google search!