How we became a nation of cutters

In the last two decades, self-injury has become a sociological phenomenon. An expert explains what happened 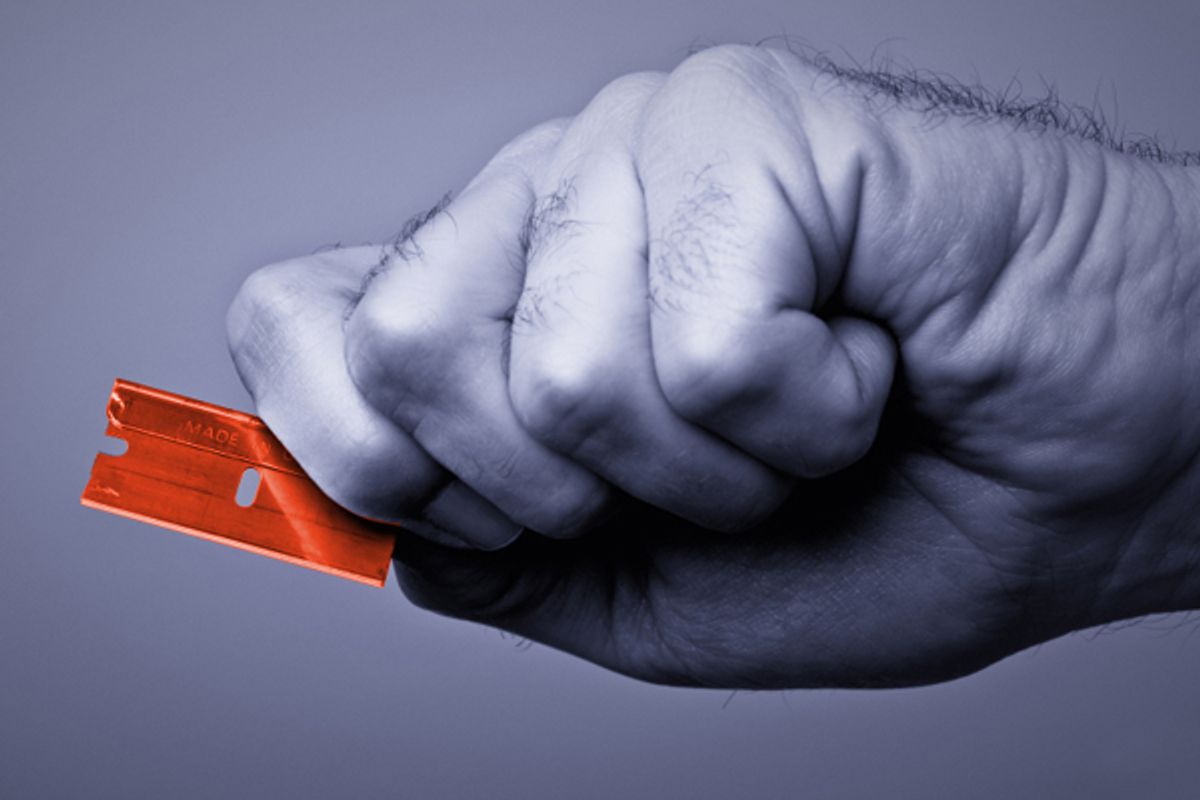 When you're a teen girl with a grotesque scar in the center of your wrist, people tend to make assumptions about how it got there. Although mine actually came from an accident with a piece of broken glass, I was ashamed of the questions -- "You really tried to do it, didn't you?" That is, until I realized my scar might have cachet. If dangerously cool celebrities like Johnny Depp and Drew Barrymore cut themselves, maybe my own wound marked my own outsider mystique.

Every generation of angst-filled teens comes up with new and scandalous ways to cope with adolescence. My mother had blue jeans and rock 'n' roll. I had riot grrrl and self-injury. The shocking revelations of self-harm from young stars had the power to transform physical indications of suffering into trendy status symbols, at least among the kids I hung out with who dyed their hair blue and listened to Nine Inch Nails. So, during high school I simply didn’t tell anyone that my gruesome gash wasn't self-inflicted. (My mom didn’t tell her friends she preferred Patsy Cline to the Rolling Stones either.)

Self-injury isn't anything new; it's been used by clergy in religious rituals and by soldiers seeking to avoid military service for the better part of history. But as Patricia Adler, a professor of sociology at the University of Colorado, and Peter Adler, a professor of sociology at the University of Denver, explain in their new book, "The Tender Cut," over the last few decades self-injury has changed itself from a psychological disorder to a sociological phenomenon. During the mid-1990s the practice spread through alternative subcultures, like punk rock, and became a form of social bonding and secret rebellion. To express their dissatisfaction with ideals they couldn't or didn't want to live up to, young people began to write their pain on their bodies and formed friendships with others who were doing the same.

Salon spoke to Patricia Adler about how the media spurred the phenomenon, what motivates people to self-injure -- and why it's not always a destructive act.

How did self-injury become a social phenomenon?

Self-injury has changed so much over the last 20 years and it has spread to a vast number of populations. It was started by people who did have serious problems, but in the mid-'90s it was picked up by people in avant garde, heavy metal and punk rock music scenes. Injury was used as a way for people to express their alternative identities and disaffection from society. From there it spread to Goths and then gained popularity among mainstream youth who were struggling with normal issues related to adolescence. For most young people, adolescence is not an easy time of life. People rebel, feel depressed and experiment with drug use.

In the early 2000s, youth started seeing self-injury appear in magazines and movies. As it became more known, people weren’t as freaked out about it. Teens recognized that people who self-injured used it as a coping mechanism when they were feeling lousy, overwhelmed and out of control. These stories conveyed that self-injury was a way to stop feeling badly, so they decided to try it. They didn’t think it was an attempt at suicide or self-mutilation. In fact, for them, it’s an anti-suicidal act that makes life more manageable. People plan their self-injury. If someone knows they’re going to have a rough time, they find a time to self-injure so they can relax. This is a social and rational behavior, not an impulsive and uncontrollable urge.

Is the media responsible for making self-injury so popular?

Self-injury was almost entirely unknown until the media started talking about it, and now it’s firmly implanted in our cultural consciousness. The single biggest way self-injury spread was from people knowing it was out there. The media made it more acceptable by showing people who have self-injured that others could relate to. By sharing their experience, movie stars and other celebrities changed the idea that people who self-injure are deeply damaged or psychotic. Before that happened, people who self-injured didn’t talk to their peers about it because they didn’t want to appear to be so damaged and needy. Now, it’s talked about so much in high schools that teens aren’t afraid to be friends with someone who self-injures because they know it’s not necessarily a sign that someone has serious psychological trouble.

So what's the difference between self-mutilation and self-injury?

Self-mutilation is a harsh and derogatory term. The people who practice self-injurious behavior don’t call what they’re doing self-mutilation, and they don’t like it when others do either -- and the term can be used pretty widely. Some people think tattooing and piercing is self-mutilation. Others say it’s mutilation to wear 4-inch heels or have cosmetic surgery. The term is invariably used as a negative value judgment, and that shows a lack of understanding about self-injury. It also doesn’t take into account that most of these people are using self-injury in order to self-soothe, not as means of self-destruction.

What are the most common ways people self-injure?

Cutting is far and away the most common form of self-injury. After that is burning, like a cigarette or chemical burn. Next popular is branding, which is when someone heats up a metal object and presses it against their skin. I’ve seen bone breaking, scratching and self-picking. We interviewed a woman who kept a scab alive under her hairline for more than three years. What isn’t included in self-injury is the homosocial bonding guys do.

If you injure in accordance with your gender role, you’re rewarded. Men and boys who outwardly express their anger by punching a wall are seen as tough and masculine. Since they’re socialized to strike out when they’re upset, we don’t call it self-injury, even though it comes from the same feelings. Men tend to cut or burn themselves very visibly and harshly. They flaunt their behavior by using duller instruments and make bigger injuries that can easily be seen on the outer part of their arms or on their chest. If men hide their self-injuries or self-injure in small ways, they are regarded as suspicious. Similarly, women who don’t conform to their gender role as self-injurers are very strongly condemned.

Why do so many more women self-injure than men?

The pressure on women to follow gender norms is so destructive, and a lot of women use deviant means like self-injury to try to feel normal. There is a lot of stigma around not being happy, and we don’t have a very high tolerance for people who are sad. Women are socialized to take out their anger and sadness on themselves. They used to take Valium and stay home in isolation. Now they use X-Acto knives or razor blades to cut their inner arms, thighs and stomach. Women are so judged by their bodies that they look for places where they can hide it. There is some overlap between eating disorders and self-injury because women look to their bodies to help them feel more in control of their lives. Women who are self-injurers are rarely showy about their behaviors, although they do it more.

Is self-injury always a "cry for help"?

In a way, it is a cry for help. Mostly, it’s a way for someone to express that they don’t feel good. A lot of people don’t have the maturity to know what they’re feeling, much less express it or ask for help. In our society, there are acceptable and unacceptable ways of asking for help, and if you ask for help in a way that is unacceptable, you may be shunned and condemned, which is kind of ironic since that’s clearly the last thing a person having trouble coping with their emotions needs.

In that case, do you think self-injury can actually be good for some people?

I do think it can be helpful. I’m not saying everyone should run out and do it, but I’ve spoken to a lot of people who use self-injury as a temporary coping mechanism to get through a difficult period of life. It’s not illegal. It’s not addictive. It doesn’t hurt other people. And the body heals. If people are stuck in a bad situation, until they’re able to get out of that situation, it can be a way to make it through.

So how do most people stop?

People begin self-injuring at all different ages, although most start when they’re in their teens. As people get older the population gets smaller because of the changes that occur during the lifespan. There are certain key points in one’s life that encourage people to stop self-injuring. A lot of young people stop during the transition from high school to college. Some people give it up when they get a professional job or if their significant other is bothered by it. Others give it up when they have children because they don’t want to be a role model for their child in that way. The largest number of self-injurers pick it up because they’ve got situational life problems, and as their life changes, they are able to move out of it.

How has the Internet changed self-injury?

The Internet has let people know that they’re not alone or crazy. Before the Internet age, people who engaged in behavior that’s seen as deviant were very isolated, but now that’s not the case. Self-injurers found people online who could understand their behavior and accept them without judgment. They found people they could talk to who actually wanted to talk about self-injuring, whether sharing stories about how they injured or finding out how to stop. However, people don’t only go to the Internet to get help. They also go to give help. One of the biggest reasons self-injurers go online is to give other people the kind of informal counseling they wish they’d received. Nobody understands how to talk to a self-injurer like someone who has self-injured.

The Internet has been really helpful in building a self-help community for self-injurers. It used to be that people had to meet in formal groups that were run by an expert who supposedly had some higher knowledge and they would instruct people on how to solve their problems. These organically emerging peer support groups are really revolutionizing that format. Now there is no expert. There is just a bunch of people sharing their experiences with each other.

People split their lives in really interesting ways. Some keep their relationships online and others decide to meet in person or through video chats. Most self-injurers have a cyber-community of people that know about their self-injury whom they talk to in very intimate ways, but these people don’t share their everyday life experiences. Then they have friends in real life that they don’t share this really emotional part of themselves with. The relationships people form on the Internet help them manage the stress of their daily lives by giving them an outlet to talk about things that upset them. It helps them to go back into the world the next day and start all over again. And in this time of great mobility, no matter where you go, your Internet friends can come with you.