Disney and others are chasing dollars, not keeping it real, one expert argues 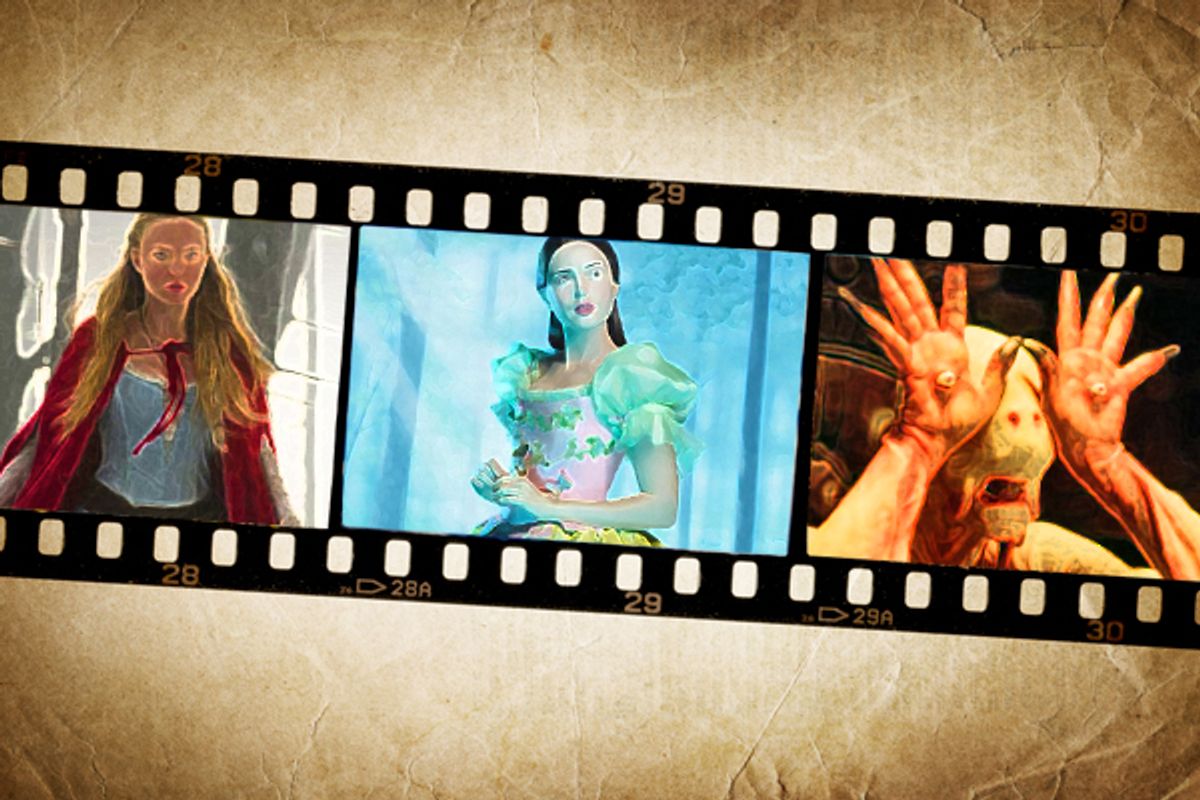 There's long been a "survival of the fittest" aspect about folklore. Just as animals evolve and become better adapted to their environments over time, stories such as "Snow White" and "Beauty and the Beast" have weathered many centuries, improving -- and becoming better suited to contemporary audiences -- over the course of their many reimaginings.

These stories have entertained and comforted, spooked and delighted audiences for countless generations. Many who are alive today find Disney's adaptations of these tales -- from "Cinderella" to "The Little Mermaid" -- familiar; children reared on the animation giant's brightly-colored, upbeat and music-saturated films may view the glut of live-action fairy tale film adaptations headed our way -- three new "Snow Whites," two "Sleeping Beauties," a "Beauty and the Beast" and a "Little Mermaid," among others -- with a curious sort of caution.

A number of these films (which are in various stages of planning and production) have been pitched as "dark" retellings of familiar tales. At this year's Comic-Con, Charlize Theron likened her "Evil Queen" character in "Snow White and the Huntsman" to a "serial killer" (not a total departure for Theron); the new "Little Mermaid" is based on Carolyn Turgeon's novel "Mermaid," which Booklist reviewed using words and phrases like "dark," "foreboding," "heartache," "misery," "constant pain," "catastrophic consequences," "brooding," "tragic" and "not exactly a cozy bedtime story."

Does this "dark turn" in fairy-tale filmmaking represent a return to older, more forbidding versions of stories Disney gussied up for 20th-century kids? Or are these new movies simply cogs in the wheel of folk tale re-telling?

For answers, I turned to Jack Zipes, an emeritus professor at the University of Minnesota and prolific author whose books include "The Oxford Companion to Fairy Tales" and "The Enchanted Screen: A History of Fairy Tales on Film."

What follows is an edited and condensed transcript of our conversation.

What is the cultural function of a fairy tale? Broadly speaking, how has it changed over the past several centuries?

[Fairy] tales themselves, they were never for children. There's a "myth" about fairy tales that makes it seem as if they were naturally generated and universal, designated primarily for children. The tales were always told and later written down for adults. There was no children's literature really, until about the 17th or 18th century. But children always heard these tales. For instance, Louis XIV grew up in the 17th century hearing fairy tales and also acted in spectacles and operas that were performed at court ...

[The fairy tale is the only genre] that stays with human beings from birth to death. When we are born, within the first year or two, we generally hear (or nowadays, watch) some kind of fairy tale ... It really informs the way we narrate our lives, and how our lives are narrated for us. That's why these tales have an extremely important cultural function in modern days; almost everywhere you go, every day, you encounter a fairy tale -- whether it's in an advertisement, a movie (whether or not they're explicitly fairy-tale movies, they're [often] based on a fairy-tale plots), [a commodity], or even, often, the way people narrate their own stories, assuming plots and familiar characters and references that are associated with fairy tales.

Has the function of a fairy tale changed? Of course it has, because technologies and the way fairy tales are disseminated and packaged have. Fairy tales were never commodities; up through the beginning of the 20th century, they were either told or read for pleasure (and also [some] of them were didactic) ... Unfortunately, in the 20th century, with the rise of the consumerist society, a lot of fairy tales -- particularly the ones that are developed by Disney, and Disney-like corporations -- have [become] commodities to consume, simply for the purpose of the brand or the corporation that produces these films. In other words, they are produced to create a little pleasure -- but basically to gain more profit and more power for the corporations that produce them.

Let's talk about some of the fairy-tale films that are due to be released in the next year or two -- several new versions of "Snow White," for instance. We don't know a whole lot about all of them yet, but many are being pitched as dark reimaginings of classic tales. Would you say it's generally true that early versions of stories such as "Snow White" were darker?

You know, all they're doing [with these films] is trying to stir your prurient interest. Really. They're trying to titillate you, to say that this is going to be the film that will expose the deep darkness, the profound darkness of these tales. And by chance, they might, you know. But [first of all], this is a paratext. They're preparing discussion already to get you ready to buy a ticket to see this film -- and this could go on for years, depending on whether they get the funding for the film.

Obviously, depending on the writer, the screenplay -- depending on how intelligent the director is, despite the fact that [the producers] are gunning for profit only -- they might indeed produce a really interesting film. For instance, Disney produced Tim Burton's "Alice in Wonderland," and aside from the ending, which is stupid, it's excellent ... I don't know whether Burton was forced to add the terrible ending, but here's a case where the Disney Corporation, which generally produces crappy animated fairy-tale films, really lucked out, because Burton is such a great artist, and he was able to really seriously contemplate how one could adapt "Alice in Wonderland" for the screen ...

So you think producers are seeing a market for dark stories, and that's why they're going down that road -- not for any other reason.

Well, the directors and actors and screenplay writers are not writing the [marketing] copy. The producers are. And so I think it's going to be interesting to see how Hollywood becomes serious about fairy-tale production.

In my work, it's quite obvious that Hollywood, for the most part, has not really taken fairy tales seriously (there are exceptions, and I deal with the exceptions in my book ["The Enchanted Screen"]). They've not tried to intelligently explore the meanings of different variants of a tale type, the way Europeans have. If you compare the European, and to a certain extent, the Japanese and South Korean [filmmaking] traditions, it's a scandal the way Hollywood has produced [so much] schlock. I would say 90 percent of the fairy-tale films that come out of Hollywood are really not enlightening or entertaining.

They also infantilize the films -- as though children are stupid, and families are stupid. (Unfortunately, something has happened in American culture, and there is a lot of stupidity going around.)

It's clear from your work -- and what you've been saying -- that you think Disney has shaped the popular understanding of these stories in a very negative way.

For many many years -- up until, I would say, the 1980s -- Disney had a huge monopoly [on animated feature fairy-tale films] in America. And it still does, for the most part -- despite the rise of "Shrek," or the films of Hayao Miyazaki or Michel Ocelot or the Russian director Garri Bardin, who recently did an absolutely brilliant animated feature fairy-tale film called "The Ugly Duckling"...

For the most part, when Americans think of fairy tales (and to a certain extent, this is also a global phenomenon), they think of Disney. Thanks to the theme parks and the commodities that are produced [and the strength of the Disney brand,] you can't help but think of fairy tales in light of the way the Disney Corporation has interpreted them. And in my mind, once you've seen one Disney film, you've seen them all: They repeat the plots; their self-produced animated films tend to be very conventional; and I think there's no experimentation whatsoever, no breaking away from the plot formulations ...

It's just boring, at least for me, to see these films ... And most animators who have worked with Disney have always wanted to be the one to illustrate the evil characters, because at least they're more interesting and more complicated.

That doesn't mean that one should write off all the Disney films -- I don't mean to dismiss these films [entirely] -- but they represent the worst aspects of capitalist, corporate productions.

The films that have impressed me a very great deal are the ones I discuss in the last chapter of my book: Jan Svankmajer's "Little Otik"; "Pan's Labyrinth" is also absolutely brilliant; and Tarsem Singh's "The Fall" -- a remarkable, colorful, unbelievable fairy-tale film. All of these, by the way, are live action. [I also like] "How to Train Your Dragon," which is a lovely animated fairy tale. Totally -- not anti-Disney -- but not like the Disney animated fairy-tale forms.

More recently, I think Catherine Breillat's "Blue Beard" is very provocative and controversial. Again, like all of these except "How to Train Your Dragon," it's live-action -- it's a fascinating revision of Perrault's tale. And as I said earlier, one of my favorite animators today, who's absolutely fantastic, is Garri Bardin; in addition to his "Ugly Duckling," he's done shorter films -- "Grey Wolf and Little Red Riding Hood" as well as "Puss in Boots"; both of them are 30 minutes long. He has a very subtle aesthetic. The images in his films keep changing; he uses all types of puppetry and clay animation, and has a political perspective that basically critiques what has happened to the Soviet Union, its decadence, and the hopes for a different type of world.

Those are the films I really think are important. In terms of films that I dislike, [there's] "Tangled" [Zipes thinks the film was so bad, it ought to have been called "Mangled"]; that, I think, represents the worst aspects of animated fairy-tale filmmaking in America. I also think the "Hoodwinked" films -- "Hoodwinked!" and "Hoodwinked Too!"-- are ridiculous and stupid, and should be banned from screens. And of course, I hope that Catherine Hardwicke and her company keep losing money on the "Red Riding Hood" film that they did, which is really an insult and offensive to anyone who thinks seriously about films.