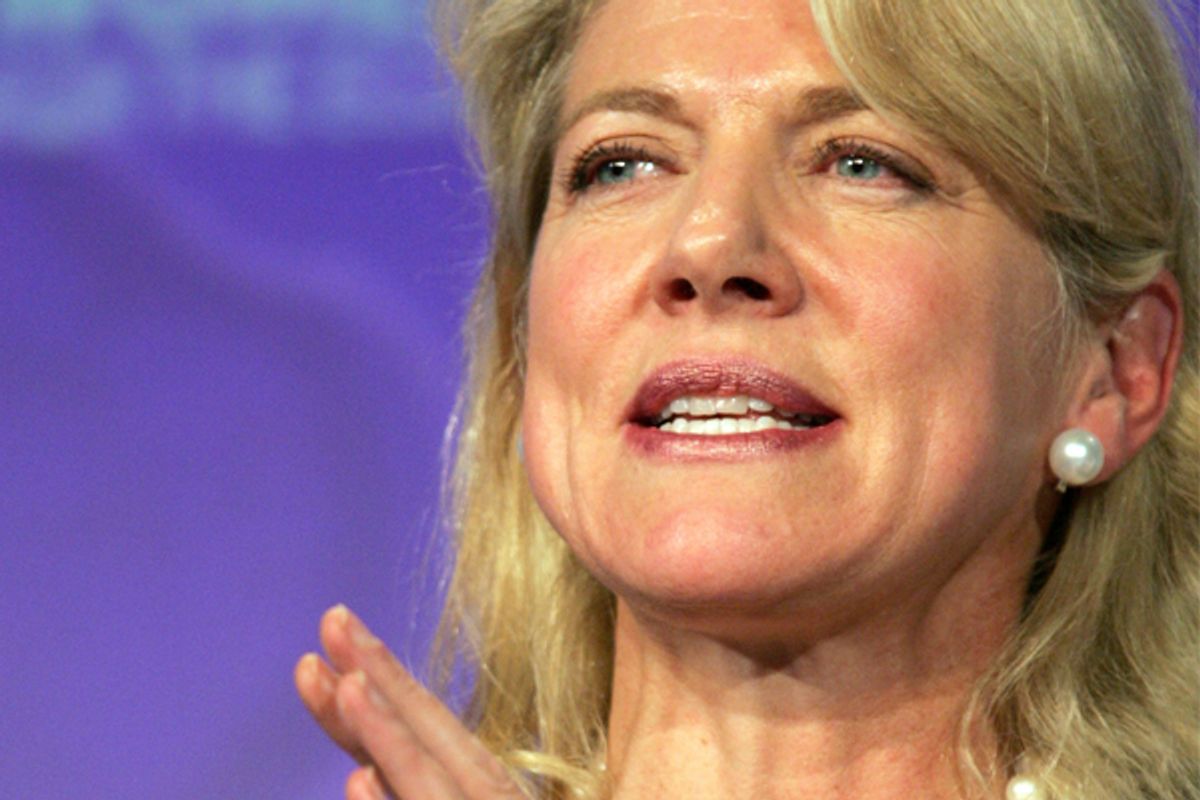 Lady Lynn Forester de Rothschild became a fixture on cable television in 2008 as one of Hillary Clinton's fiercest supporters in the Democratic primary. A successful businesswoman who married the financier Sir Evelyn Rothschild in 2000, she was also a major bundler for the Clinton campaign.

But when Hillary lost, an embittered Rothschild switched sides and endorsed McCain in the final weeks of the 2008 campaign. In the 2012 cycle, she has both hosted a fundraiser in Manhattan for former Utah Gov. Jon Huntsman and been associated with the hedge fund-backed group Americans Elect, which seeks to circumvent the party conventions and nominate a bipartisan presidential ticket.

On Friday, Rothschild spoke to Salon by phone from Martha's Vineyard. The conversation ranged widely, from her support for single-payer healthcare as well as Republican economic policies to her unlikely admiration for both Hillary Clinton and Eric Cantor. And, of course, her abiding enmity toward Barack Obama.

You're not supporting Obama for reelection. Where do you think he has erred in the last three years?

In 2008 as a Democrat, I tried as hard as I could to say that it mattered that Barack Obama did not have the experience to run this country. In the last three years we have seen absolutely that that is the case. The man is lost. The man is a loser. The man is not listening to people who might help him. And four more years of Barack Obama will be devastating for the country.

Are there policy areas where you think he has gone wrong?

Where he has gone wrong is the disgraceful fact that there are 14 million people unemployed and 25 million people underemployed or who have given up work. That is a disgrace. That's number one. This man cannot say it was given to him. I believe it was cravenness and vanity that caused him to do Obamacare, giving us an entitlement program that costs at least $1 trillion, before he fixed the economy and brought people back to work. To have done healthcare without dealing with the cost curve, and without giving us ultimately what we should have -- like the British have, which is a single-payer system -- is an outrage. He's created a monster; he has taken healthcare, which is 17 percent of GDP right now, and has expanded it to another 30 million people. He is going to bankrupt America. He's so vain and he's so convinced of his own transcendence as a solution to everything that he's incapable of doing the right thing for the country.

On healthcare, a lot of people will say that the law that ended up passing looks a lot like Hillary's plan from the election, with its inclusion of the individual mandate. How do you reconcile your support for Hillary with your opposition to Obamacare?

First of all, in times of economic crisis, a person who understands the way the world works would have embraced business and would not have demonized business as Obama did. That's what a leader does. Barack Obama is not able to get off of the partisan bandwagon. He is the exact opposite of what he promised he would be. He was supposed to be the great unifier and to bring enlightened solutions; he's really hurting this country. So I am more worked up for 2012 than I was for 2008.

With the current Congress and Republicans controlling the House, they're not on board with doing more stimulus or anything like that. So what do you think Obama should do right now on the economy? Are there concrete steps that can be taken that would get through Congress right now?

The Republicans are saying, "We need growth because without growth there can be no job creation." So the Republicans are looking at proposals Barack Obama has to spend more money as proposals to limit growth; that's the reason for the opposition. So Barack Obama makes a speech where he attacks Congress but he offers no positive solutions. If you read the document that Eric Cantor sent out to his members. He said, we have two goals: one is that we have to reduce the deficit and the debt; and the other is we have to create growth in the economy. And we can't reach one of those objectives if it hurts the other objective.

Do you think that deficit reduction will lead to growth in the economy?

The Times reported recently you hosted a fundraiser for Jon Huntsman. What do you see in him?

I really like Jon Huntsman, I think he is exactly the president we need right now. Number one because he is a knowledgeable and experienced fiscal conservative. He knows how to create jobs though reducing regulation and reducing taxes. At the same time he understands the important and constructive role government has in making our society fairer and better. When he as governor of Utah came out in favor of civil unions, it showed how deeply this man is committed to social justice and fair treatment for all people. That's the combination that I really admire in him. Whether he can win the Republican nomination I don't know. If he won it, he would beat Barack Obama in a heartbeat.

A lot of people know you as a prominent Hillary supporter in 2008. Going from Hillary to Huntsman -- have you changed ideologically?

You know, if I were able to pick the president, it would be Hillary Clinton. I still consider myself a Clinton Democrat. But the Democratic Party has been so cowardly in standing for the things that Bill Clinton did that made the country so strong in the 1990s, that I have no time for the Democratic Party anymore. Their failure to stand up to the Chicago-dominated Democratic Party is appalling. The only person who is really doing it is Andrew Cuomo. I think Cuomo is a really unique thinker, and he is outside of the Chicago boys Democratic Party of Barack Obama that everyone else just falls in line with. Obviously the Republicans don't offer me everything, but I also refuse to demonize the Republicans. I think John McCain is a great and very courageous man. I think that Eric Cantor, who is so demonized, if you look at what he actually says and believes in terms of the economy, he is actually a very constructive person.