Falling in love as the USSR crumbled 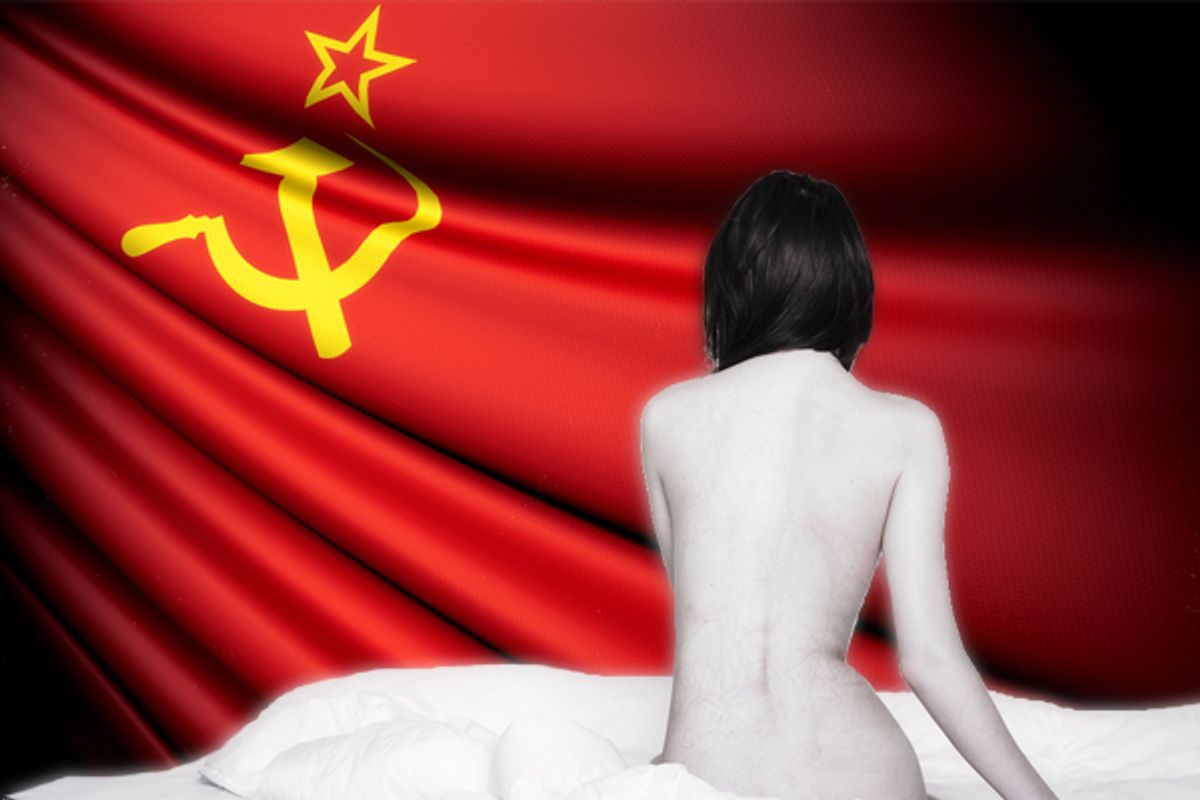 "I saw you in my dream last night," my ex-wife said, touching my arm when we happened upon each other in downtown Manhattan the other day. She spoke as if continuing a conversation only recently interrupted. In fact, the last time we'd talked intimately was two decades ago, back when the Soviet Union had crumbled to dust.

"Mm hmm, yes, I saw you in my dream," she repeated, her Russian accent faded now to a passable American. "Very clearly I saw you. And you were dead."

Like many intelligent Russians who came of age during the closing act of the USSR, my ex-wife was a kind of stand-up comedian in reverse. Just as the talented comic artfully sets up a punch line, so too could she expertly build toward a release of sorts. But the punch line was never a joke. It was instead an opening up of a psychic trap door, showing foolish Americans that beneath their feet was not the security of a prosperous and powerful nation, but rather the void of the impending destruction that awaits us all. When your superpower homeland has been blown apart into 15 compromised statelets it's comforting to keep in your pocket that great transnational equalizer: death.

And yet, once upon a time I found all her moody blueness charming. We had met at a university dormitory in 1990, the final year of Soviet power. I had registered temporarily at the dorm as part of the many bureaucratic sleights-of-hand the Westerner had to execute to stay in the country. Technically I was supposed to leave the USSR when my study abroad program ended. But while I was desperate to leave I also had a hankering to stay. And so through the machinations of the many machinators of the Perestroika era, I arranged it so that I would register in the Leningrad University dorm, pay some functionary a nominal $150 and then relocate to an old lady's flat, far out on the Prospekt Prosveshchenie where for $7 a month I would have a room of my own. All I would have to do beyond these trifling payments was to stay a single night at the dorm. A bargain it seemed, until the future ex-Mrs. Greenberg walked in.

There was much talk and a lot of weak tea during that one legally necessitated sleepover. My East German bunkie who spoke much better Russian than I seemed in full control of the evening, artfully throwing out pogovorki -- proverbs that seem particularly embedded into Russian and that irritatingly keep the poor student of the language in the dark. "The peasant doesn't cross himself until the thunder sounds," "chicken and girls are seized with the hands." That kind of thing. But when her visit was over, the East German found himself oddly rebuffed and it was I who was slipped a phone number and an appointment that led eventually to a foldout bed pressed up against the thin wall adjoining her parents' room. Half-understood, rolling under cool embroidered sheets, struggling to communicate things that should have come out as easy praises, I was only able to mutter blunt, minor words: "beautiful," "interesting," "very." And in the end she took a breath and arranged herself and then turned to me and asked with yet another tricky Russian idiom:

"Yes, did you finish? Are you satisfied?"

I did go. Not only out of the room and out onto the empty dawn streets of Leningrad but eventually back to New York where I brooded, alone, in the broke and semi-employed way today's shiftless post-boom 20-somethings would likely find familiar. It was the walloping recession of the early '90s. There was very little to do or to hope for. And so I found my thoughts drifting to the stoic, vaguely sad woman I'd left in Russia. But if she was on the sad side, "tending toward depression" as a psychiatrist like my father might say, well, that was OK with me. I liked her melancholy abruptness. I liked the whole direct-but-gentle sadness of the Soviet Union. I liked how nobody went to a shrink and how people stayed away from shrink words like "depressed," "depressive" and "depression." Russians somehow seemed to understand that depression was just sadness and that sadness was just a mood. One of many lenses through which you can take in life's light. Moods colored life, sometimes darkly, but they also gave life immediacy and freshness, allowing you to react sincerely to every new thing that came your way.

As luck would have it, I was given another chance to go back to that way of thinking. A few months after my return to the United States a small-time Siberian hustler posing as a documentary maker arrived in New York and cobbled together a film crew that consisted of a Dutch producer, an American camerawoman and, for reasons I don't understand to this day, me. All of us were flown to Moscow, put on a four-day train ride to Lake Baikal, and then told to film a documentary about, well, I really have no idea. Vague pieces of Michael Moore-esque intervention were staged where we would storm into the offices of a Soviet bureaucrat, insult him, film him and then leave. We would gather random crowds on the streets of Irkutsk and make them sing the Lake Baikal ode "Slavnoe Morye" -- Glorious Sea. We slaughtered and ate a sheep. And then toward the end of our stay, just as I was trying to figure out a way to get back to that captivating woman in Leningrad, our driver walked into our hotel room, told us breakfast was ready and, also, by the way, "Snyali Gorbacheva." They took Gorbachev.

It was the infamous hard-liner military coup attempt of August 1991, although, of course, we at the time didn't know it would turn out to be only an attempt. For three days we drove the back roads of Siberia debating whether we should turn south and head out through Mongolia. All of our hotel reservations were mysteriously canceled as the single thread of Soviet power gathered itself together and drew tight on a million different knots. At one point on a narrow muddy road our van pulled over and two taut-tummied Russian boys with a guitar jumped in. Apparently they were known to the Russians in the group. Once they were seated, the guitar came out and one of the boys spat out a fast-paced Visotsky-style ballad that ended (for my benefit?) with an English refrain "goodbye America, hello Siberia."

It was during these three days of political vertigo that I found I thought of her the most. At one little outpost I sent (how quaint to remember!) a telegram. "Are you all right?" I scribbled on the toilet-paper quality telegraph form (though it should be noted that the coarseness of Soviet toilet paper and the flimsiness of Soviet writing paper were a good deal closer together on the spectrum of "paper" than the American variants). But it may as well have been toilet paper. Passing it through the telegraph window to the bored, platinum blond operator seemed akin to a flush.

But, alas, it wasn't. Miraculously the coup ended. Boris Yeltsin emerged and stood on a tank. The hard-liners were imprisoned. One shot himself. The phones worked again. I called her and the creaky Siberian lines issued forth her voice. "I got your telegram," she said. "Very sweet." I flew to Leningrad, which now everybody was suddenly calling St. Petersburg, and we made love again and again in a tiny apartment I'd rented for another $7. We made love on an overnight train to Moscow. We made love again in the apartment of her pioneer camp counselor. On my final day in Russia we necked on the steps of Patriarch's Pond until a young Soviet malcontent yelled a phrase at us that must be known the world over: "Get a room!"

All of this came rushing back to me as she pulled her hand away from my arm on Seventh Avenue and we retreated back into the small talk that is my national tradition and that she had seemed to have mastered in the last two decades. Children (me yes, she no)? Work (not so interesting). Travel (now and again). She had seen me in her dream and I was dead. And given that I had firmly closed the Soviet chapter of my life, the chapter in which I was young and impetuous, when the thought of intense, inexplicable coupling could fill my whole mind, the chapter in which I was open to the world and where she had come to know me most intimately, I guess you could say that her dream was right on the money.