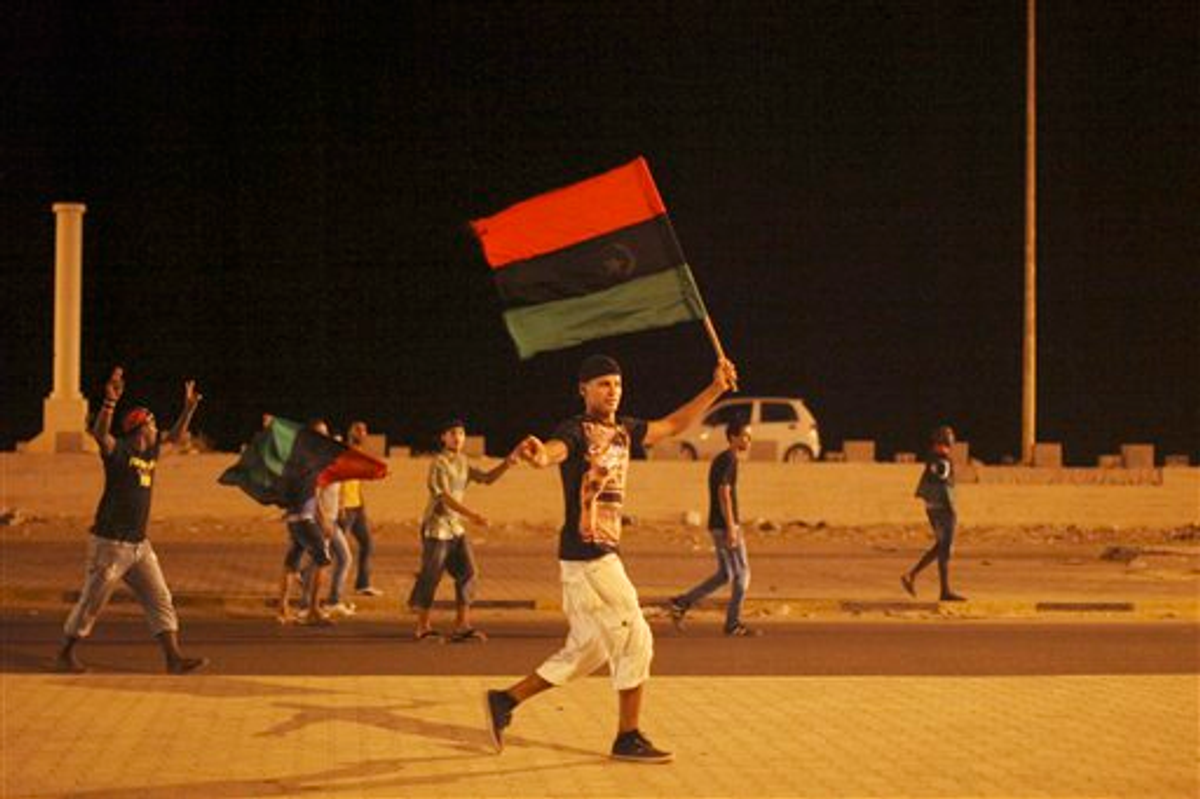 The fall of the Gadhafi regime appears today to be imminent.

Here's the latest, as rebels take most of Tripoli and world leaders urge Muammar al-Gadhafi to surrender.

"The surest way for the bloodshed to end is simple: Muammar Gadhafi and his regime need to recognize that their rule has come to an end," President Barack Obama said in a statement.

The dramatic events of the weekend will, no doubt, produce all sorts of interesting questions — from who ends up ruling the country if Gadhafi steps down, to how that transition is managed, to what role NATO might have to play.

There will also be plenty of jaw-boning about the political implications in the U.S.: is it a political victory for President Obama? How will the story play across the ongoing fight for the Republican nomination for the 2012 presidential elections?

But the most important consequence may end up being economic.

Why? Oil, of course.

Libya is the world's 17th-largest producer of the stuff, and there's a growing expectation among some analysts that with the conflict perhaps coming to a close, Libyan oil production will rapidly increase. That, in turn, would lower oil prices and, eventually, lead to a drop in gasoline prices in the U.S., the world's largest economy.

In short: the fall of Gadhafi could end up giving Americans what amounts to a big fat tax cut.

David Kotok, the chairman and chief executive of Cumberland Advisors makes the case in Business Insider:

Libyan oil production will ramp up. As it does, oil prices in world markets will fall and oil futures markets will reflect the expected increase in production of oil from Libya...We expect oil prices to fall when highly desirable, sweet Libyan crude production is fully resumed and enters the pipeline. Maybe, they are going to fall by a lot. This will come as a much-needed boost to the US economy and to others in the world.

Remember: the oil price acts like a sales tax on consumption. To clarify this relationship we convert crude oil prices to gasoline prices and then estimate what a change in gas price will mean for the American consumer. Roughly, a penny drop in the gas price per gallon gives Americans 1.4 billion more dollars a year to spend on other than gasoline. That is a huge stimulant to the economy. The ratio is different in Europe because the gas taxes are so much higher there. Nevertheless, it is still significant.

Lower gas prices could not come at a more needed time. With weakening economies around the developed world, the lowering of the consumption "tax" from high oil prices will be a welcome boost. In the US, it is possible we will see gas prices with a $2 handle, instead of the $4 handle of a few months ago. This is a large positive change for the US economy, and it is not being incorporated in the gloomy forecasts that we see.

Of course, not everyone holds this rosy view.

"I see the price coming down on Brent as more of a knee jerk reaction," author and former oil trader Dan Dicker told CNNMoney, estimating that it will take a long time for Libyan oil to flow back into the market. "You're not going to see a barrel of oil from Libya for at least a year."

Manouchehr Takin, senior petroleum analyst at the Center for Global Energy Studies in London, also told CNNMoney that Libya's resumption of production is more likely to be a gradual flow.

"The state of the oil infrastructure in Libya remains uncertain, he said, and there could be unforeseen factors that would interfere with the resumption of production," CNNMoney reported.

Here's a link to the latest trading.