Whoops, no one told the right that their Libya talking point doesn't work anymore 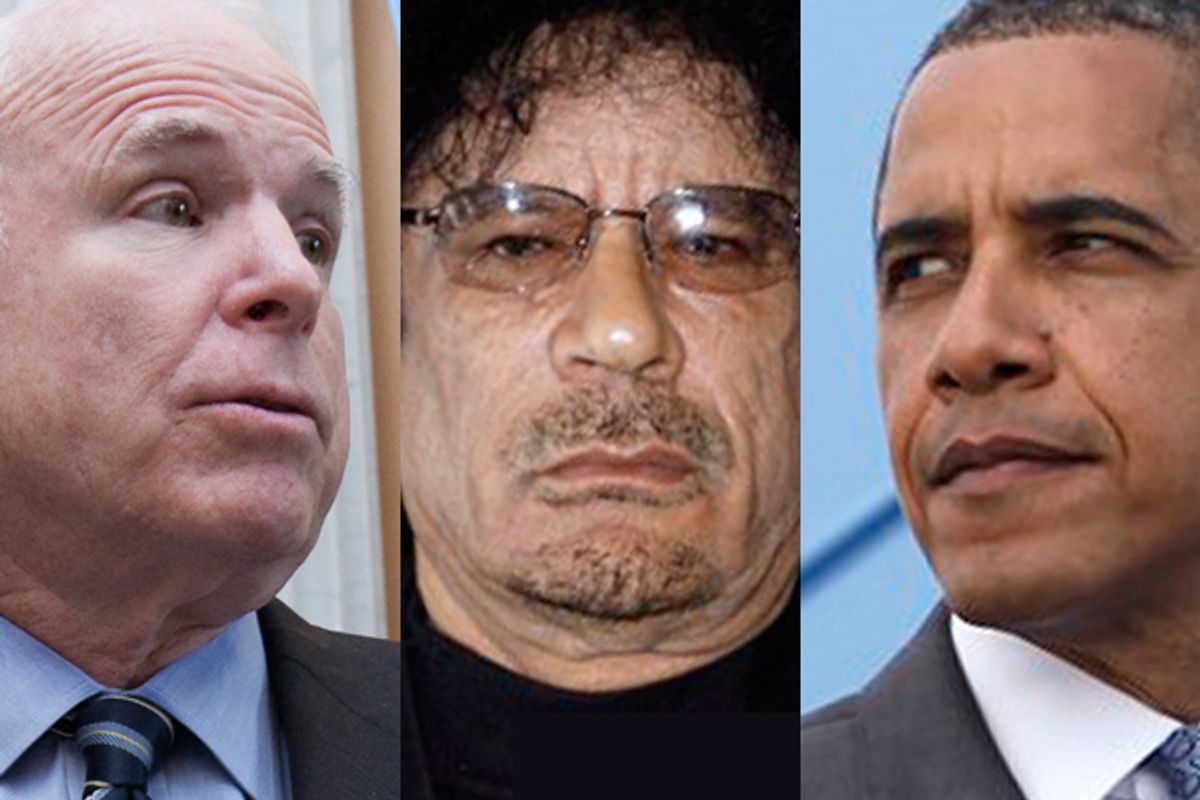 It's obviously premature to celebrate "victory" in Libya when no one knows what will happen next, or how difficult and bloody the process of state-building will be. (And Gadhafi is not yet actually gone.) But the news is good, and Obama's strategic approach to the conflict -- allowing France and NATO to take the lead to minimize the chance that America was seen as leading another Iraq-style war of aggression -- seems to have been the right one. (Strategically. Not necessarily legally.) As Steve Kornacki wrote this morning, this should be the end of the "Obama is too weak to lead" talking point from the right. It should be, but ... it isn't.

Today's Wall Street Journal editorial page takes a break from excusing the criminality of the executives in charge of its parent company to deliver an official house reaction to the developments in Tripoli that starts off cautious and then just descends right back into the exact same lame arguments it's been using for the last six months:

Having helped to midwife the rebel advances with air power, intelligence and weapons, NATO will have some influence with the rebels in the days ahead. The shame is how much faster Gadhafi might have been defeated, how many fewer people might have been killed, and how much more influence the U.S. might now have, if America had led more forcefully from the beginning.

Planning for this moment is precisely why we and many others had urged the State Department to engage with the rebels from the earliest days of the revolt, but the U.S. was slow to do so and only formally recognized the opposition Transitional National Council in mid-July. The hesitation gave Gadhafi hope that he could hold out and force a stalemate.

Libyans will determine their own future, but the U.S. has a stake in showing the world that NATO's intervention, however belated and ill-executed, succeeded in its goals of removing a dictator, saving lives, and promoting a new Libyan government that respects its people and doesn't sponsor global terrorism.

I'm not sure how long the editors of the Wall Street Journal think your average revolution lasts, but assuming Gadhafi's hold on power is as weak as it appears today, I would argue -- as a layman, of course -- that NATO's intervention seems neither "belated" nor "ill-executed." (I mean, it seems well-executed, in the sense that it seems to have accomplished its goal?)

But it's the line about America leading "more forcefully from the beginning" that the neocons and GOP hawks will continue to cling to no matter what actually happens in Libya. It's the same argument BFF Sens. John McCain and Lindsey Graham used in their joint response to this weekend's developments: "Americans can be proud of the role our country has played in helping to defeat Qaddafi, but we regret that this success was so long in coming due to the failure of the United States to employ the full weight of our airpower."

All-out war! From day one! With the full force of American airpower! One definite way to make a civil war faster and less bloody is for a foreign country to enter it fully, right? (It tends to unite the populace, for one thing!) And conflicts are always less bloody when America drops more American bombs. That's how we won Vietnam!

There's no point in countering McCain and the Journal's arguments with reason, of course, because these are not actually fact-based responses to news, they're just rote recitations of Republican dogma: Obama weak! (Except domestically, where he is an autocrat.)

And this is the "respectable" Republican talking point. The line from the real nuts -- I'm guessing something along the lines of "radical Obama allows Muslim Brotherhood to seize control in Libya" -- will begin bubbling up from the sewers to talk radio and Fox News and Michele Bachmann's campaign soon enough.