Criminal case against french politician, and former IMF chief, comes to a close 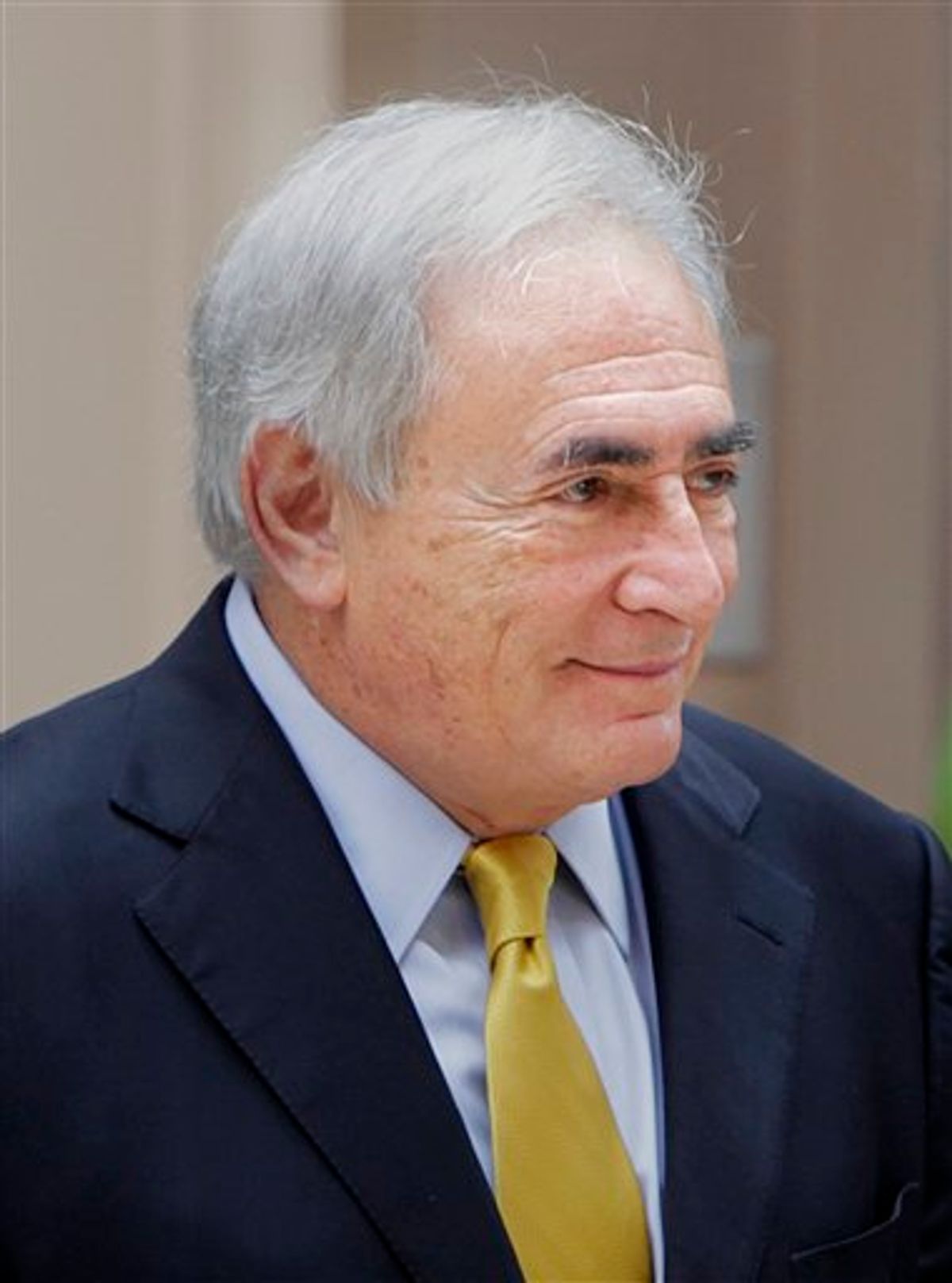 FILE- In this July 6, 2011 photo, Former IMF head Dominique Strauss-Kahn leaves his rented house in New York. The lawyer for the woman who accused Strauss-Kahn of sexual assault said Saturday, Aug. 20, 2011, that he believes prosecutors plan to dismiss some or all of the charges. (AP Photo/Seth Wenig, File) (AP)
--

New York City prosecutors asked a judge Monday to dismiss all criminal charges against Dominique Strauss-Kahn because they aren't sure beyond a reasonable doubt that the hotel maid who created a cross-continental sensation by accusing him of sexual assault is telling the truth.

The Manhattan district attorney's office said in court papers that the accuser, Nafissatou Diallo, repeatedly gave false information to investigators and grand jurors about her life, her past and her actions following her encounter with the French diplomat.

"In virtually every substantive interview with prosecutors, despite entreaties to simply be truthful, she has not been truthful on matters great and small," the lawyers wrote.

Diallo, and her attorney, Kenneth Thompson, met briefly with representatives of the Manhattan district attorney's office to discuss the decision not to proceed with the prosecution. Thompson didn't say what had happened inside or reveal what his client was told, but he recited a short statement condemning prosecutors for their handling of the case.

"Manhattan District Attorney Cyrus Vance has denied the right of a woman to get justice in a rape case," he said. "He has not only turned his back on this innocent victim. But he has also turned his back on the forensic, medical and other physical evidence in this case."

Thompson is asking a judge for an order disqualifying the prosecutor's office from handling the case. Diallo is also suing Strauss-Kahn, seeking to make him pay financially if not with his freedom, a move that the diplomat's lawyers helped erode her credibility.

Strauss-Kahn is scheduled to go before a judge Tuesday. His lawyers, William Taylor and Benjamin Brafman, issued a statement saying that he and his family were grateful for the decision.

"We have maintained from the beginning of this case that our client is innocent," they said. "We also maintained that there were many reasons to believe that Mr. Strauss-Kahn's accuser was not credible."

The case captured international attention as a seeming cauldron of sex, violence, power and politics: A promising French presidential contender, known in his homeland as "the Great Seducer," accused of a brutal and contemptuous attack on an African immigrant who had come to clean his plush suite at the Sofitel hotel.

The stakes were high for Strauss-Kahn, who resigned his IMF post, spent nearly a week behind bars and then spent possibly hundreds of thousands of dollars to pay for house arrest, as well for Vance, who was handling the biggest case he has had during his 18 months in office.

Strauss-Kahn, 62, was arrested after Diallo, 32, said he chased her down and forced her to perform oral sex. Strauss-Kahn denied the allegations, and his lawyers have said anything that happened wasn't forced.

Like many sexual assault cases, in which the accused and accuser are often the only eyewitnesses, the Strauss-Kahn case has hinged heavily on the woman's believability.

Early on, prosecutors stressed that Diallo had provided "a compelling and unwavering story" replete with "very powerful details" and buttressed by forensic evidence; his semen was found on her uniform. The police commissioner said seasoned detectives had found her credible.

But then prosecutors said July 1 they'd found the maid had told them a series of troubling falsehoods, including a persuasive but phony account of having been gang-raped in her native Guinea. She said she was echoing a story she'd told to enhance her 2003 application for political asylum. She told interviewers she was raped in her homeland under other circumstances and embellished it to get herself and her 15-year-old daughter a chance at a better life in the U.S.

She also wasn't consistent about what she did after her encounter with Strauss-Kahn, telling a grand jury she had hovered in a hallway when she actually returned to his and another room before consulting her boss, prosecutors said. She said the alleged discrepancy was a misunderstanding.

She also alluded to Strauss-Kahn's wealth in a recorded phone conversation with a jailed friend, and her bank account had been a repository for tens of thousands of dollars she couldn't explain, a law enforcement official has said.

She said a jailed man had used the bank account without telling her. As for the phone call, Thompson said, she mentioned Strauss-Kahn's money only to say that her alleged attacker was influential.

Prosecutors said in their filing that without other evidence verifying her claim that Strauss-Kahn attacked her, and sexually assaulted her by force, they weren't willing to base the case entirely on Diallo's truthfulness, when her credibility "cannot withstand the most basic evaluation."

"The nature and number of the complainant's falsehoods leave us unable to credit her version of events beyond a reasonable doubt, whatever the truth may be about the encounter between the complainant and the defendant," they said.

She sued Strauss-Kahn Aug. 8, seeking unspecified damages and promising to air other allegations that Strauss-Kahn accosted and attacked women in other locales.

His lawyers called her suit a meritless claim that proved she was out for money.

The Associated Press generally doesn't name people who report being sexually assaulted unless they agree to be identified or publicly identify themselves, as Diallo has done.