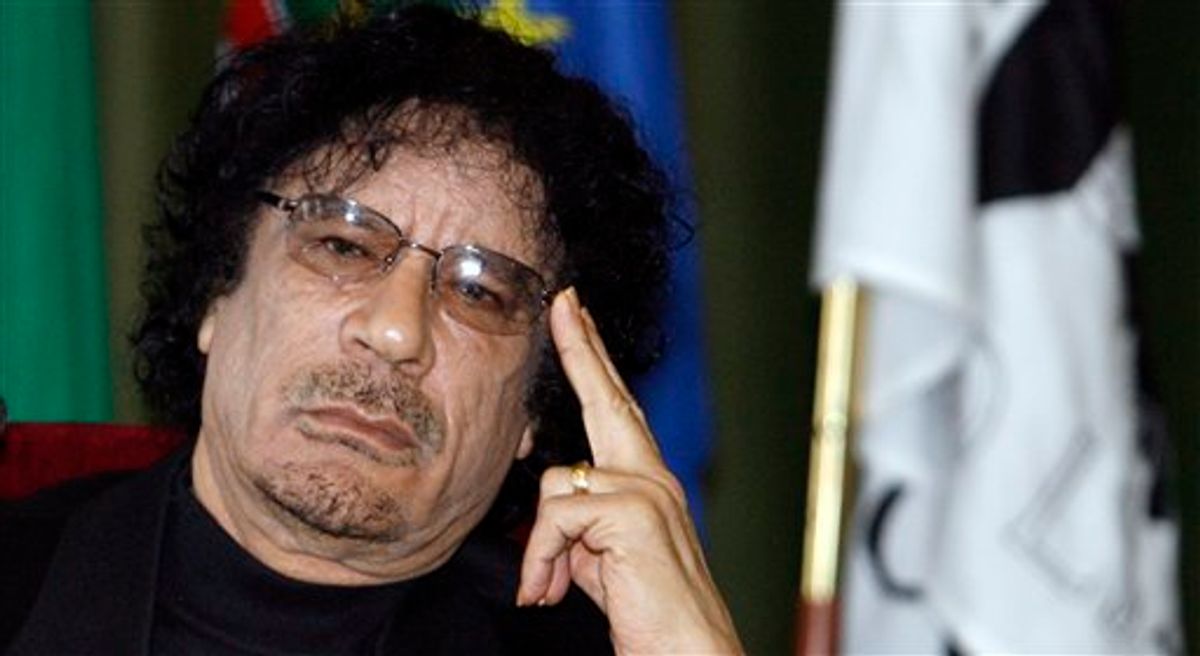 FILE -- In a Dec. 7, 2007 file photo Libyan leader Moammar Gadhafi gestures while speaking during media conference at the University of Lisbon, in Lisbon, Libyan rebels took control of most of Tripoli in a lightning advance Sunday, Aug. 21, 2011, but the leader's whereabouts were unknown and pockets of resistance remained. (AP Photo/Paulo Duarte/file) (AP)
--

World leaders said Monday the end is near for Moammar Gadhafi's regime and began looking at Libya's future without the man who has held power there for 42 years.

Leaders across Europe welcomed the rebels' dramatic advances in the Libyan capital, Tripoli, after six months of fighting, and urged Gadhafi to surrender and avoid a bloodbath. Hundreds of Libyans living abroad celebrated in the streets, burning images of the Libyan strongman.

Though Gadhafi's whereabouts was not known, leaders set in motion plans for Libya's future. Britain said its frozen Libyan assets will soon be released to help the country's rebels establish order; France announced plans for an international meeting next week; Italy has sent a team to the rebels' base of Benghazi to help plan reconstruction and the restoration of oil and natural gas production.

"The time is up. There is no alternative to surrendering and handing himself in to justice," Italian Foreign Minister Franco Frattini said Monday.

"His regime is falling apart and in full retreat. Gadhafi must stop fighting, without conditions," Cameron said in London. He vowed that Britain and others would now assist Libya's "effective transition to a free, democratic and inclusive" nation.

Cameron said British diplomats would move from Benghazi in the east to Tripoli as soon as it was safe to do so. Crucially, he announced that Britain, which has frozen about 12 billion pounds (US$20 billion) of Libyan assets, will soon release the funds.

Germany announced similar plans once the regime is out. Foreign Minister Guido Westerwelle said that just over euro7 billion ($10.1 billion) is frozen in Germany and that the money could be used to help rebuild Libya. "The Libyan people are entitled to this money," he said.

France said the "contact group" of international powers involved in stabilizing Libya would meet next week in Paris. Foreign Minister Alain Juppe said the head of Libya's opposition group, the National Transitional Council, would be in Paris to discuss the future now that Gadhafi's regime is "finished."

France and Britain, backed by the United States, have spearheaded the NATO-led air campaign that began months ago under a U.N. Security Council resolution calling for the protection of civilians.

In Brussels, the European Union vowed in a statement to "keep supporting the country in its democratic transition and economic reconstruction, based on social justice, inclusiveness and territorial integrity." The EU has given euro150 million ($215 million) in humanitarian aid to Libya during the civil war, and in May, EU foreign affairs chief Catherine Ashton extended de-facto recognition to the rebels' council by opening a diplomatic office in Benghazi.

But leaders also cautioned against the risk of escalating violence as a desperate Gadhafi might try to cling to power. Instead, they said, Gadhafi should face justice and turn himself in to the International Criminal Court.

"There's a great risk that the violence will escalate," Swedish Prime Minister Fredrik Reinfeldt told Swedish news agency TT. "It's a very dangerous situation with various militia groups of young, angry men on the loose and armed with weapons. It would be best if the regime simply surrenders and we get a cease-fire and rid of the weapons."

Frattini said there was no longer room for mediation, including allowing Gadhafi to go into exile or remain in Libya but relinquish power -- as had been suggested at various points as diplomats sought ways to get out of what appeared to be a military stalemate.

South Africa -- which has criticized the NATO bombing and led failed African Union efforts to mediate between the rebels and Gadhafi -- insisted it had sent no planes to Libya to evacuate Gadhafi. It said it had received no request from him for asylum, and was involved in no efforts to extricate him.

"I'm quite amazed that there's even an insinuation that we are facilitating evacuation of anyone," said Foreign Minister Maite Nkoana-Mashabane. She said that "for sure, he will not ask to come here" and noted that South Africa is an International Criminal Court member -- suggesting that South Africa would have to arrest Gadhafi if he arrived there.

The International Criminal Court has indicted Gadhafi on charges of crime against humanity, along with one of his sons, Seif al-Islam Gadhafi, and Libya's intelligence chief. Seif Gadhafi has been arrested by rebel forces, while another one of Gadhafi's sons is under house arrest.

The government of Malta, a tiny Mediterranean island close to north Africa, has also denied reports that Gadhafi is headed there.

On Sunday, U.S. President Barack Obama urged Gadhafi to accept reality and relinquish power. "The surest way for the bloodshed to end is simple: Moammar Gadhafi and his regime need to recognize that their rule has come to an end," the president said.

Outside of the country, Libyan expatriates celebrated what they felt was already the end of the regime.

In Ankara, the Turkish capital, dozens of Libyans flocked to the embassy to celebrate the rebels' seizing much of Tripoli. They removed the Gadhafi regime's green flag from a mast and replaced it with the rebels' tricolor one. They grabbed Gadhafi posters from inside the building, smashed or set them on fire as the embassy staff watched. The group, which included women and children, then proceeded to chant and dance as they waved the rebels' flags.

A similar scene occurred in Malta, where some 200 Libyans entered the Libyan embassy on Sunday to hoist the Libyan independence flag while setting fire to pictures of Gadhafi and his green flag. The celebrations continued through the night and were still on Monday morning.

"The celebrations we currently see in Libya, and not least in the streets of Tripoli, all point in one direction: the Libyan people's struggle for freedom has gone into the playoffs," said Prime Minister Lars Loekke Rasmussen of Denmark, whose country took part in the NATO campaign. "It is crucial that the final phase is handled in a dignified manner and that the National Transitional Council remains united to manage the transition toward the holding of free elections."

Associated Press writers around the world contributed to this report.