When the shrieking child is your son

As the mom of a 4-year-old with Asperger's, I'm used to accusatory stares when he throws fits. Does it get easier? 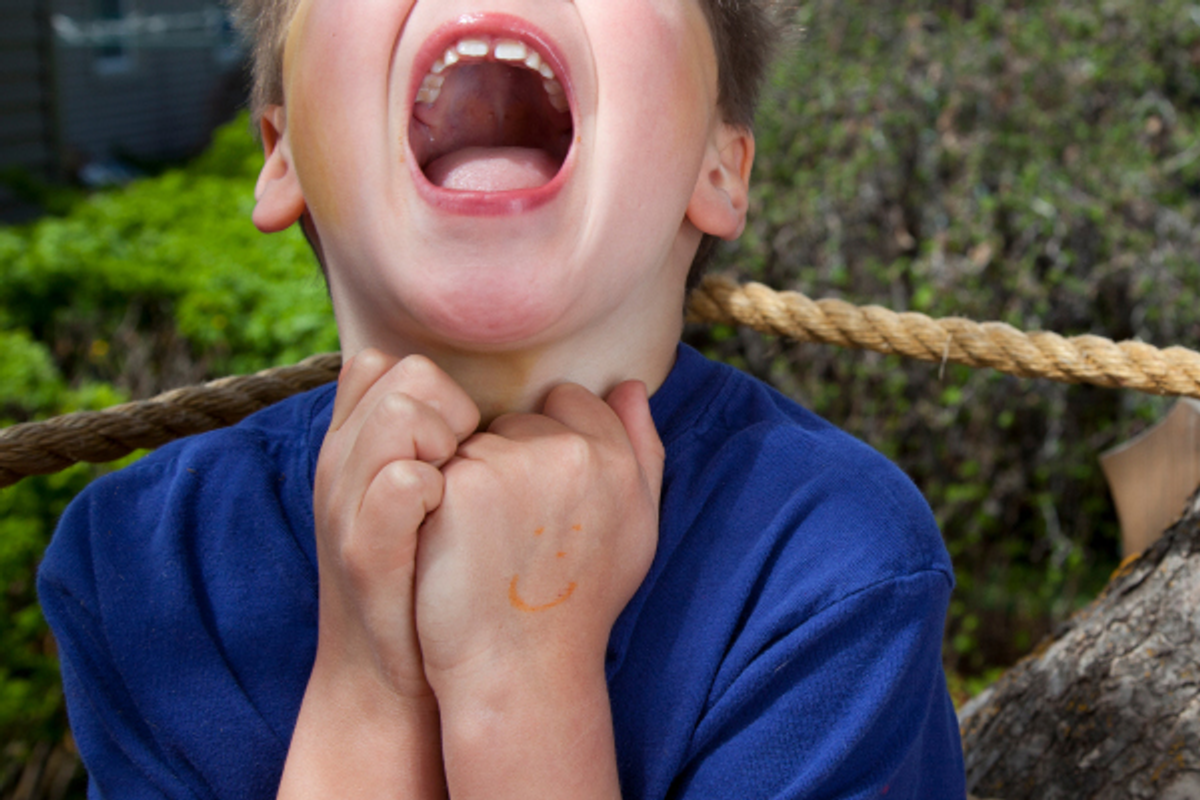 I am the mother you shun at Walmart. Your disapproving eyes dart from my disheveled hair to my 4-year-old son. It's August, but he's dressed in a long-sleeved shirt and black-wool leggings. He also sports a cowboy holster and sheriff's badge. Any minute now, he'll start yelling and shrieking about the toy he wants to buy. You wonder what is wrong with him. You wonder what is wrong with me. I wish I could assure you that we'd be out of your way soon, but I have no idea how long this harried Walmart nightmare will last. All I know is that this will be our sole outing this week, and that I only brought him here out of sheer desperation. We are out of milk, and if my son does not have milk tonight in his special cup, he will have a horrible hour-long rage. He will hit me, crawl under the table, scream and throw things. His little sister will cry in fear. The dogs will cower behind the sofa. I will pour myself a big glass of chardonnay. When the rage, which may last anywhere from 15 minutes to three hours, finally passes, I will cuddle him, massage his shoulders, put him to bed and say, "I love you." Then I will go out to the living room and cry and drink some more.

My son has Asperger's syndrome. Most people have heard of it by now; even Facebook founder Mark Zuckerberg is rumored to have it. I have my doubts, though. I see little resemblance between the billionaire genius and my 4-year-old son. I wonder if the Facebook founder had daily, explosive, irrational fits when he was 4. I wonder if his mother drank.

I first realize we have a problem when my son is 18 months old. My family tells me his screaming fits are just his way of "pressing my buttons." They say I'm spoiling him; that's why he throws tantrums when he doesn't get his way. But they can't explain his extreme negative reactions to large crowds and loud noises. Once when we're in a public restroom, the automatic toilet flushes, and my son throws himself against the door and begins beating on it in his desperation to get away. The lady in the next stall glares at me when she comes out. I know she thinks I was hitting him. Another time at church, the organist starts playing, and my son dives under the pew in front of him. The man beside us moves over, far over.

I think my little boy is just sensitive, until at age 3, he starts having bathroom issues. He holds it all in until his little tummy was bloated, and once he doesn't go for four days.

I take him to the pediatrician. I have to tell elaborate lies about where we're going, because by that time, doctors scare him. When he got his shots for preschool, he cried and screamed for a half-hour straight. Once we pull into the parking lot, I have to bribe him with money -- a lot of it -- just to get him out of the car. "I want paper money. No metal," he says.

After I explain the bathroom problem, the pediatrician tells me I should make my son sit on the toilet after each meal for approximately 10 minutes. I pay my $50 copay and walk out the door. That night, I find out that 10 minutes is a long time when you're yelling, "Sit there, damn it! Sit there!" When he finally does go, the toilet is smeared with feces. I assure my husband that it was just a mistake; our son is not smearing feces, he is not destined to become an ax murderer. I believe this to be true. No, I need this to be true. Desperately.

For a few weeks, things seem to be getting better, but then my son begins to pull out his eyelashes. Then he picks at a mosquito bite until it bleeds. One time, he sucks on his arm until a red bruise appeared, ironically shaped liked a small smile. He becomes more difficult for me to handle too. When I run out of his children's toothpaste and put regular, adult toothpaste on his brush, he screams for an hour afterward. He says it was hot and burned his tongue. He accuses me of trying to kill him.

Our pediatrician finally recommends a psychiatrist. "He is displaying some signs of Asperger's syndrome," he says quietly. "I'd like to refer you to this new doctor who specializes in child psychiatry." For once, my son is not the one crying when we leave the office. I am. I Google the terms when I get home, and cry some more. I refuse to believe my son has autism. There must be some mistake. My son is smart, verbal and creative. Like so many other people, I have no idea what the "autism spectrum" really is, and it makes no sense to me that my intelligent, funny, beautiful little boy has anything in common with nonverbal, special needs children. My husband is as shocked as I am. We talk about it endlessly, and finally decide to get a second opinion.

This time, we take our child to a children's hospital. They give us 40 pages of forms to fill out, and ask his preschool to fill out papers too. Four months later, the diagnosis comes back: Asperger's syndrome, attention deficit disorder and oppositional behavior disorder. My husband starts to ask questions, but there are few answers. The Nice Doctors give us booklets and the names of parent-support groups. They refer us to a specialist whose office is two hours away, because there are no child psychiatrists in our town who are taking new patients.

I'll be honest. I don't do much of anything right away. I can't. When my family asks what the doctors said, I write them an email: "This is hard to write. He has been diagnosed with autism. It's on the high end of the spectrum, called Asperger's syndrome. [I am ashamed of this disclaimer, but still, I write it.] I know one day we will be the Poster Parents and do fundraising and have benefits to raise awareness. But for right now, we are shocked and panicked and grief-stricken."

No one writes back. Perhaps they are just giving us a little space, I think.

Finally, grief subsides a little, and I begin to get back to the work of trying to help my boy. When I try to make an appointment with the child psychiatrist, he says, "I have a specialized practice, and I don't take insurance. It's $300 for the first evaluation, which should last an hour and a half and $150 for each session after that. I don't do counseling; I just manage medicines. Now what was your son's diagnosis again?"

My son is sitting beside me. I've never said those words in front of him. "Asperger's syndrome," I whisper. I'm not even sure I'm pronouncing it correctly.

"The first appointment I have is in three months," New Doctor says. My son doesn't hear a word. He is looking at Halloween costumes in a magazine. Halloween, or any holiday, ever, seems very far away to me.

After three months of daily rages punctuated by two threats to kill me, we visit New Doctor. His office is resplendent with a water fountain in the foyer, deep burgundy couches in the waiting room, and what looks to be a real Tiffany lamp.

"I still can't believe my son has autism," I say to New Doctor, still hoping he'll tell me it's a mistake.

"This will be a problem until you accept it," New Doctor says, somewhat harshly. "We will put him on this anti-psychotic medicine, try a social skills class, and enroll him in an occupational therapy program. This can work, over time. "

I tune out. It's the word "time" that hits me. I am already stretched to my limit. I work 40 hours a week. I take my children to the pediatrician, dentist, eye doctor and reading specialist; they both are in swimming lessons, and my husband is often gone because he works for the military. But, sure, let's throw in some more classes.

Now, the doctor is saying that I'm doing a good job. I don't believe him; he sounds too patronizing. He also tells me things might get worse, especially when my son hits adolescence. He rattles off a long list of problems he will likely encounter -- ordinary things like peer pressure, alcohol and drug abuse, hormones -- all exacerbated tenfold by his special needs. It's a glimpse into the future as my son's mother, and to be honest, I hate what I see. Where will I get the guts, help, information, help, respite, help, time, help, steadfastness, help, money, help, love, help, energy, help, I need for him in the coming years?

About two months later, as the medicines kick in, the New Doctor turns out to be right. My son does indeed get better. The rages have stopped, for the most part, except when we go to crowded, noisy places, like a restaurant, like a school concert, like Walmart. I have cut my hours at work so I can take him to therapy appointments. I have learned to prevent a lot of problems for him by sticking to routines and eliminating a lot of extra things from our lives. It is hard. Very hard. Life seems ... sparse. But still, I see improvement, and I cling to it. My son seems more content, more balanced and more -- I hate to use this word -- normal.

Me? I'm not sure I fared as well. I'm not normal anymore. I am tired. And to be honest, I blame myself, I blame my husband, I blame Old Doctor, New Doctor and Nice Doctor. And on a lot of days, I blame my son. I know I'm not supposed to, but I do. I'm working with another psychiatrist, this time for me, trying to get past all that blame and anger.

Until I do, I'm just another mother in Walmart, walking fast, trying to avoid eye contact.