Yes, it could potentially be done -- but wait until you see what the cost of doing it would be 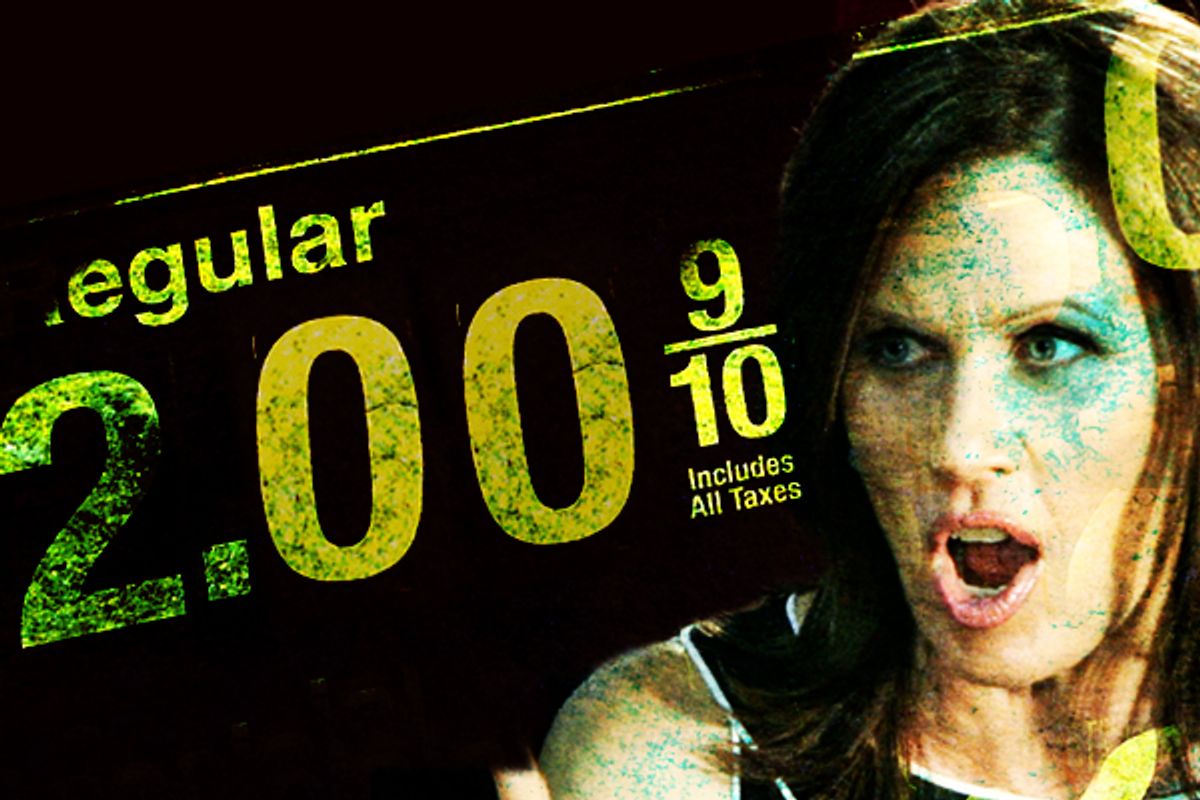 It has been a week since Congresswoman Michele Bachmann told the country that she would bring gasoline prices down to under $2 per gallon if she were president. The reaction has run from "Wow! Can she really do that?" to "There is no way a president can determine the cost of gasoline." Candidate Bachmann has been pilloried by the left for her hubris, grandiosity, cynical political posturing and failure to grasp the realities of a world petroleum market.

The critics are wrong. A president of the United States can drive gasoline prices down, and the promise to do so is not new. Though Bachmann did not immediately provide a plan on how she would drive prices at the pump lower, there have been many plans promoted to lower the price of gasoline, and she may have drawn from some of them.

She may have been listening to The Donald. In his short-lived run for the White House, Donald Trump said he would bring the price of oil down by seizing the oil fields of Iraq and Libya and putting total production of these two countries in our gasoline stations. Two problems with that scenario: First, the seized oil would have to first pass through the world market where it would be available to the highest bidder. And two, it would be a criminal act of the highest order. Details.

More likely, she is looking at Newt Gingrich's plan from 2008. Gingrich proposed opening up the spigots on the country's Strategic Petroleum Reserve (SPR) and dumping the whole stockpile on the open market. Gingrich said that the sudden influx of new oil would drive speculators out of the market and the price of petroleum would drop significantly. Economists agree that the market would see a sudden drop if that were to happen.

But once you have emptied the 727 million barrels of crude from the SPR on the market, which the world would drink up in a month (faster, if cheaper), there would be nothing left in the strategic tank to offset real supply disruptions caused by war, OPEC manipulation or natural disaster.

A president could order such a thing, however. The International Energy Agency may punish such misbehavior, but the price of gasoline at the pump would fall below $2 a gallon for about a week before oil investors figured out it was only a political gag.

Of course, she could, with Congress's help, open the Arctic National Wildlife Refuge (ANWR) to drilling. That would cause a slight lowering of prices for a short time. The U.S. Geological Survey estimates there are roughly 7 billion barrels of recoverable crude in the ANWR. Americans consume more than 20 million barrels of petroleum a day. So if we kept all that oil for ourselves, we would use every last drop of it within a year. But the price of gasoline at the pump would likely fall to $2 a gallon before the markets realized politicians had just been dreaming.

One will hear Congresswoman Bachmann say as a candidate that there is more oil in three western states of America than in Saudi Arabia. She will bemoan the fact that it is currently against the law to drill and explore in much of that area. She will also say that the bulk of that petroleum is in the form of shale-oil.

There is no question there is a lot of it, but it is locked up inside of rocks, like marlstone. The rock is super-heated and the petroleum vaporizes. It is then condensed. It is so simple that high school students can perform the operation in chemistry class. But the kids aren't paying the bills for the energy required to heat the rocks.

Such annoying details, however, are the first calculations of companies like Exxon-Mobil. It threw itself into shale oil recovery, and then exited when it found it simply cost too much to make a profit. Royal Dutch Shell is interested in shale oil, but costs are high and the process of extraction uses an awful lot of water. Water is, increasingly, a concern in the West. It is an increasing concern in Estonia, where oil shale is the main source of petroleum. According to a 2004 technical paper called "Shale Oil. A Scientific-Technical Journal" by Anto Raukas, 91 percent of all of the water consumed in Estonia was consumed by the oil shale industry.

You may not hear this from the candidate, but shale oil is not crude oil. It contains a higher level of nasty chemicals that tend to pollute and harm humans. The process, known as retorting, also yields significant amounts of mercury. I'm not sure how she squares her comfort with that kind of mercury with her horror for the mercury in compact fluorescent light bulbs. Details.

One other troubling detail Congresswoman Bachmann may have some difficulty explaining. First, it is well established that President Ronald Reagan is an icon of Bachmann's political career. How then will she explain that it was President Ronald Reagan who, in 1986, signed a bill into law that abolished the United States Synthetic Liquid Fuels Program. Reagan took the government out of the shale oil business.

Martin Feldstein was President Reagan's chairman of the Council of Economic Advisers. In a July 2008 opinion piece in The Wall Street Journal, Feldstein wrote on the subject of lowering oil prices. Boiling it down, Feldstein said there were two roads to bringing prices down. One was the immediate expansion of supply. By flooding the market with oil, the price drops because the supply would exceed demand for a time. The other solution (and remember, this is a conservative writing) is "increases in government subsidies to develop technology that will make future cars more efficient, or tighter standards that gradually improve the gas mileage of the stock of cars, would lower the future demand for oil, and therefore the price of oil today."

So there are two approaches to lowering the price of petroleum. Her proposal to increase supply through the development of shale oil will likely drive prices higher because of the increased well-head cost of the production of a barrel of oil from rock. Her calculations fail to take into consideration the environmental and health costs to the taxpayer of shale oil production. Expanding the supply in that fashion will not, according to a number of oil experts weighing in on her proposal, bring prices down.

As president, Michele Bachmann could drive prices for gasoline below $2 per gallon. She could reduce demand by putting the full force of her office behind conservation, technology and efficiency and drive the demand for oil as low as it can go. Or she could get it as low as it was in the last days of the George W. Bush administration and as low as when President Obama took office by simply sending us back to a worldwide depression.

As I said, Michele Bachmann, as president of the United States, could keep her promise of lowering the price of gasoline. What voters must ask themselves is: "What will that cost me?"

Don Shelby writes about a variety of topics, and he has a special interest in the environment and ecology. Before retiring in 2010, he worked for 32 years as anchor, investigative reporter and environmental correspondent for WCCO-TV in Minnesota.