The battle for Libya's not over yet

Despite jubilant celebrations, rebels admit that pockets of resistance remain throughout the nation 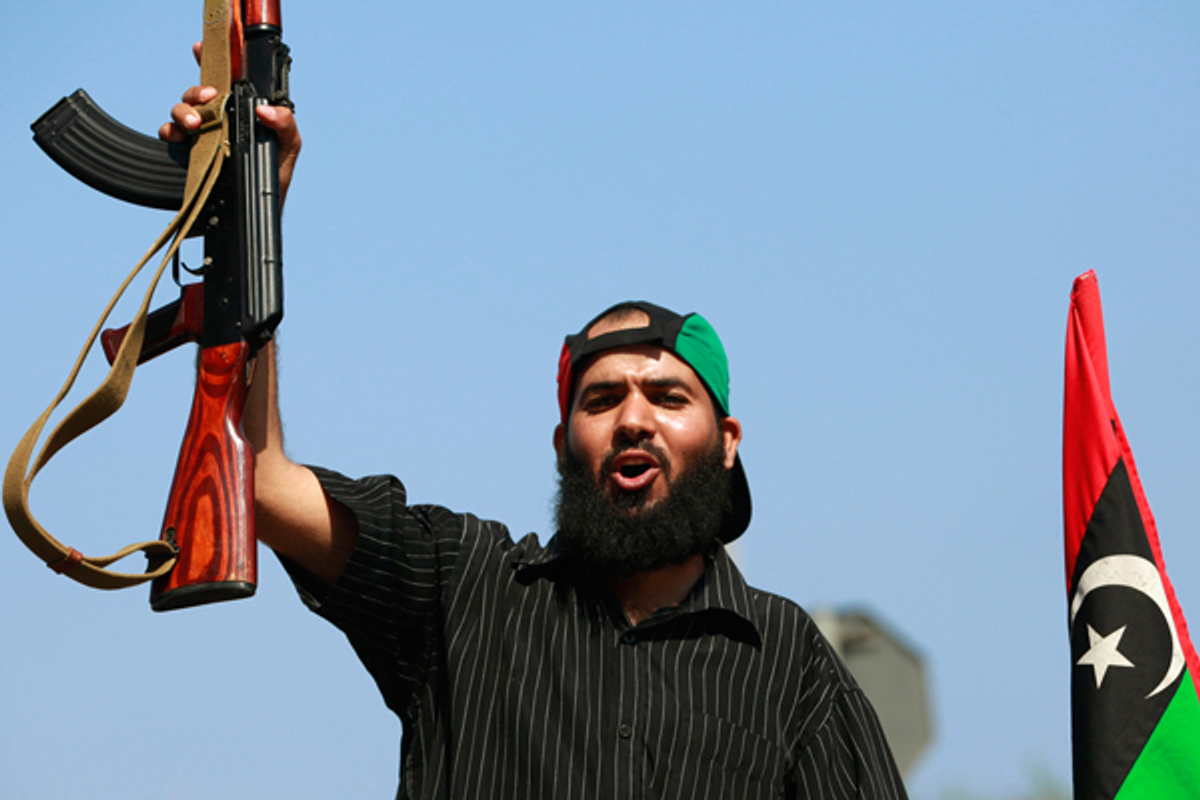 A Libyan rebel fighter celebrates as they drive through Tripoli's Qarqarsh district August 22, 2011
--

Thousands of jubilant revelers strolled the streets around Benghazi's Martyrs' Square -- the epicenter of the February uprising against Gadhafi's 42-year rule -- well into the early hours on Tuesday morning.

Most people in the festival-like square were heartened by news that rebels had captured and detained three of Gadhafi's sons, Saif, Mohamed, and Saadi, and that the leader's own Tripoli compound was completely encircled.

"Since making it to Tripoli, it is now all but assured that this is over and that we will be finally free from Gadhafi forever," said Saif Nasser, 45, sitting under a tent with his friends at Martyr's Square.

It seems, however, that the party started a little early.

Late on Monday, conflicting reports about the rebels' military successes in Tripoli began to emerge, leading to much confusion about the veracity of information being disseminated by both sides in the conflict.

Fierce fighting and gunfire was still being reported in several neighborhoods in both Tripoli and Zuwarah, a city west of Tripoli along the coastal route to the Tunisian border. Gadhafi forces were reportedly using grad rockets in Zuwarah, according to rebel leaders in Benghazi.

Meanwhile, Mohamed Gadhafi, who had been apprehended by rebel fighters on Sunday, had already escaped the next day, according to reports.

Rebel claims that Saif Gadhafi was in their custody were also premature. Saif, once presumed to be the heir apparent to Gadhafi's rule, stepped out of a car in central Tripoli, to flaunt his independence in front of a crowd of journalists.

"We broke the back of the rebels. It was a trap. We gave them a hard time, so we are winning," Saif screamed on Monday outside his father's Bab al-Azizia Tripoli compound, defiantly challenging the contradictory reports that he had been arrested, according to Reuters.

Much of what official spokesmen for the Gadhafi regime have said in recent days -- that rebel fighters would encounter intense resistance in a heavily guarded capital city -- has been largely disproven by rebel accounts on the ground inside Tripoli.

But the conflicting news on Monday has raised some doubts over the credibility of the information coming from the National Transitional Council (NTC), the Benghazi-based rebel administration that has been recognized by the United States and many other countries as the legitimate representative of the Libyan people.

Shamsiddin Abdulmolah, the director of media and communications for the NTC, confirmed to GlobalPost that his government had unknowingly released reports about Saif's capture based on inaccurate information.

"We should have requested evidence of the detention, but we did not. We took the information on face value," Abdulmolah admitted. "But the situation on the ground in Tripoli is very fluid, and sometimes commanders on the ground receive conflicting reports from their subordinates."

Abdulmolah also said that Gadhafi loyalists posing as rebel fighters had helped Mohamed escape on Monday. Mohamed's request to make a telephone call -- which was granted -- was most likely used by regime forces to pinpoint his exact location, according to Abdulmolah.

Meanwhile, the NTC reiterated on Monday that 75 percent of Libya was under the control of "liberating forces" on Tuesday, and that only pockets of resistance remained.

Gadhafi's Bab al-Azizia compound remains one of those pockets, despite being totally surrounded by rebel fighters.