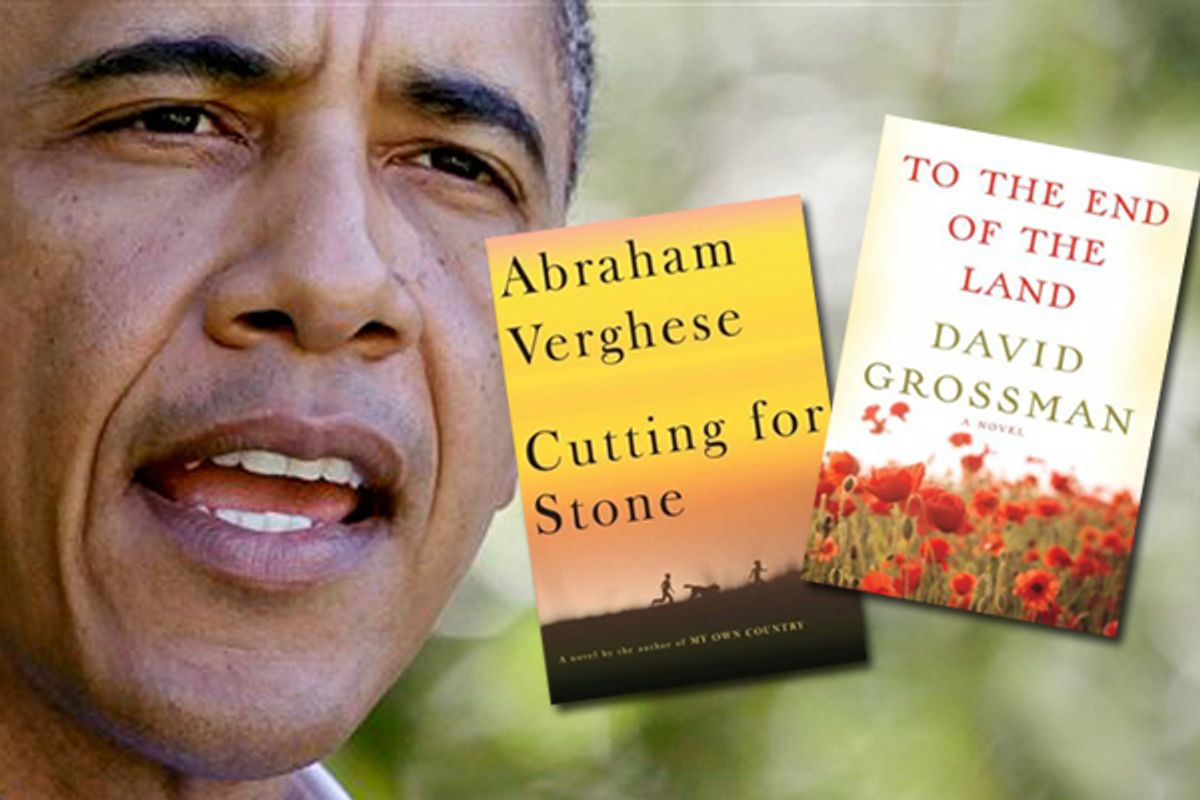 Barack Obama is reading gritty rural neo-noir by an acknowledged master of the crime fiction genre, and the National Review is not happy with him. The president bought Daniel Woodrell's "Bayou Trilogy," along with a number of other novels, at a Martha's Vineyard bookstore, and Tevi Troy, a "senior fellow at the Hudson Institute and a former senior White House aide" ("senior fellow at the Hudson Institute" means "minor Republican apparatchik in need of a paycheck while his party's out of power") is analyzing the president's reading list for you.

The reports are in about the books President Obama is looking at on his annual trip to Martha’s Vineyard. According to reports from the Los Angeles Times and the AP, Obama purchased five books on his trip to the Vineyard bookseller Bunch of Grapes: Marianna Baer’s Frost, Aldous Huxley’s Brave New World, Daniel Woodrell’s Bayou Trilogy, Emma Donoghue’s Room, and Ward Just’s Rodin’s Debutante.

The second wave came when, according to Alexis Simendinger, White House aides listed for reporters the three books Obama brought with him to the Vineyard: two more novels — Abraham Verghese’s Cutting for Stone and David Grossman’s To the End of the Land — and one nonfiction work — Isabel Wilkerson’s The Warmth of Other Suns: The Epic Story of America’s Great Migration.

This "may constitute the oddest assortment of presidential reading material ever disclosed," according to Troy. Because Woodrell's books may be almost universally praised, but they are genre fiction, and genre fiction is too trashy for presidents to read. "Bill Clinton, for example, used to love mysteries, but he did not advertise the titles of what he once called 'my little cheap thrills outlet.'" Even Bill Clinton knew better than to tell people he read books with crimes in them! (Can you imagine if Barack Obama was found to be hiding the fact that he read crime fiction? IMPEACHMENT.)

Also one of the novels is by an Israeli author, but it is by an Israeli author who criticizes Israeli policy, proving once again that Obama is no friend of Israel. "[R]eading this novel will likely not assuage those concerned about Obama’s views on the Middle East," says Troy, and he should know, because he is the one using it to attempt to score an insane political point.

The best part (noted by Matt Yglesias) is when Troy asks why this bookstore's online store doesn't list horrible books written by National Review contributors as "in stock."

Obama, like other Democratic presidents, has tended to read mainly liberal books, although he could stand to gain some insight from conservative ones. There could be many reasons for his selection bias, but buying his books at the “legendary” Bunch of Grapes probably is not helping matters. While I have never had the pleasure of shopping there, the store’s website highlights a variety of its offerings, with nary a conservative work. There may be some on the shelves there somewhere, but they are probably not staring Obama in the face when he visits the store.

According to the results of my completely unscientific survey of Bunch of Grapes’s website, Laura Ingraham’s Of Thee I Zing, Jonah Goldberg’s Liberal Fascism, and Mark Steyn’s After America were listed as available for online ordering. Thomas Friedman’s Hot, Flat, and Crowded, which appeared as an Obama book selection twice, in 2008 and 2009, was listed as “In Stock.” This is not meant as a criticism of the bookseller; Bunch of Grapes is running a business, and they need to cater to the liberal crowd at Martha’s Vineyard in order to bring in customers. At the same time, if Obama wants to diversify his reading selections, Bunch of Grapes may not be the place to go.

Why would Bunch of Grapes stock Emma Donoghue's "Room," a novel Aimee Bender called "truly memorable" and "remarkable," when they could stock Jonah Goldberg's "Liberal Fascism," a book that the American Conservative says "reads less like an extended argument than as a catalogue of conservative intellectual clichés, often irrelevant to the supposed point of the book"? Liberal bias, that's why. Liberal fascist bias.

Anyway, the president is "out of touch" and "in a bubble" because he can read, according to a conservative intellectual, at a "think tank."