The senior senator from Utah didn't have room to move right, so he went mean 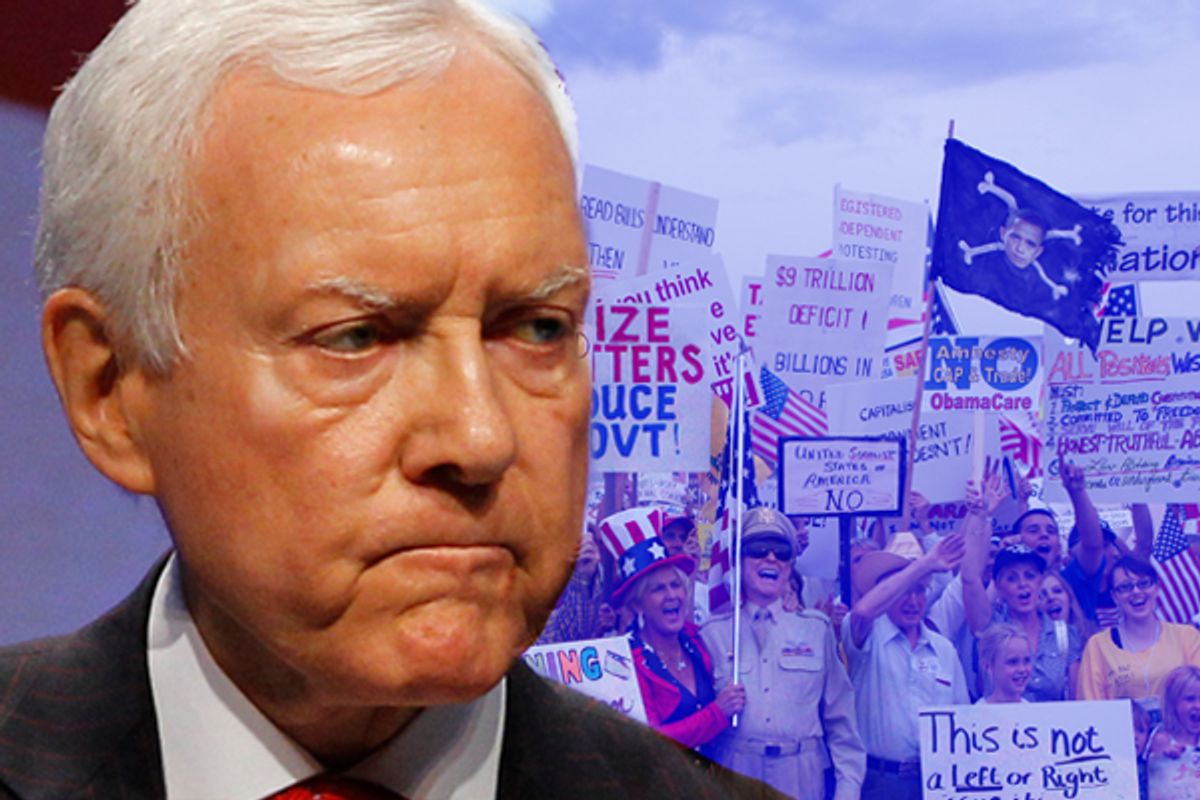 Orrin hatch used to be the symbol of how our American political system could, against the odds, still work for Americans. The rabidly conservative senator was proud to call the steadfastly liberal Sen. Ted Kennedy his personal friend. He is a symbol of how the Senate used to pride itself on civility trumping partisanship. No moderate he, Hatch was still able to see his political opponents as humans, and he could recognize where there was common ground to be sought. And that is why the Tea Parties hated him and wanted to primary him.

But Hatch got out of it! Somehow, against all odds, Rep. Jason Chaffetz decided not to run against Hatch in 2012, after going so far as to hold town halls outside his district to gauge support for a run.

Hatch's poll numbers had begun to crawl up, though, and Chaffetz decided his sure-thing reelection was safer than battling an entrenched million-term senator.

Read Michelle Malkin's reasons to vote against Hatch list. Most of it boils down to "he says nice things about Democrats." That is bad and wrong, because Democrats are evil. So Hatch learned to abandon his entire life of being respectful and civil, as he was presumably brought up to be, in favor of lashing out angrily all the time and being "fiery."

Orrin called the democratic healthcare reform plan "an awful piece of crap" and a dumb-ass program. Hatch is a 77-year-old Mormon, I don't think he's supposed to be talking like that?

Being civil is what got Hatch into this mess in the first place, so while the healthcare negotiations dragged on, Hatch took to disingenuously bemoaning the absence of his good friend, the then-ailing Ted Kennedy, whose presence would've apparently magically made the bill more palatable. This allowed Hatch to have his cake of not cooperating while eating his cake of thinking of himself as something more respectable than a miserable old party functionary no longer allowed to stray from party dogma lest he lose the cushy position that has come to define his life since he'll never make it onto the Supreme Court. So he joined the Senate GOP in making 60 votes the new standard for getting any business at all done, while pretending it had always been thus.

Suck up to the Tea Parties

They really love nothing more than to be flattered, the small angry minority of far-right Christian wingnuts who have declared themselves a grass-roots populist movement, and so Hatch pretends the people who screamed insults and threats at him last year are different from the wonderful Tea Partyers he has always supported.

"Rude" town hall attendees who had shouted at him last summer, he declared, "were not tea party people," they were "other party people."

Raise a shitload of money

And make it hard for your Tea people opponent to do the same. This seems to be what actually scared Chaffetz off, and it is obviously good advice for anyone running for anything.

So after you've finished spending the better part of a year completely discarding your entire carefully crafted public image as a gentleman legislator of the old school, make sure you have millions of dollars. Now you're probably mostly safe from an insurgent candidate!