Sex charges dropped against DSK, not in effect yet 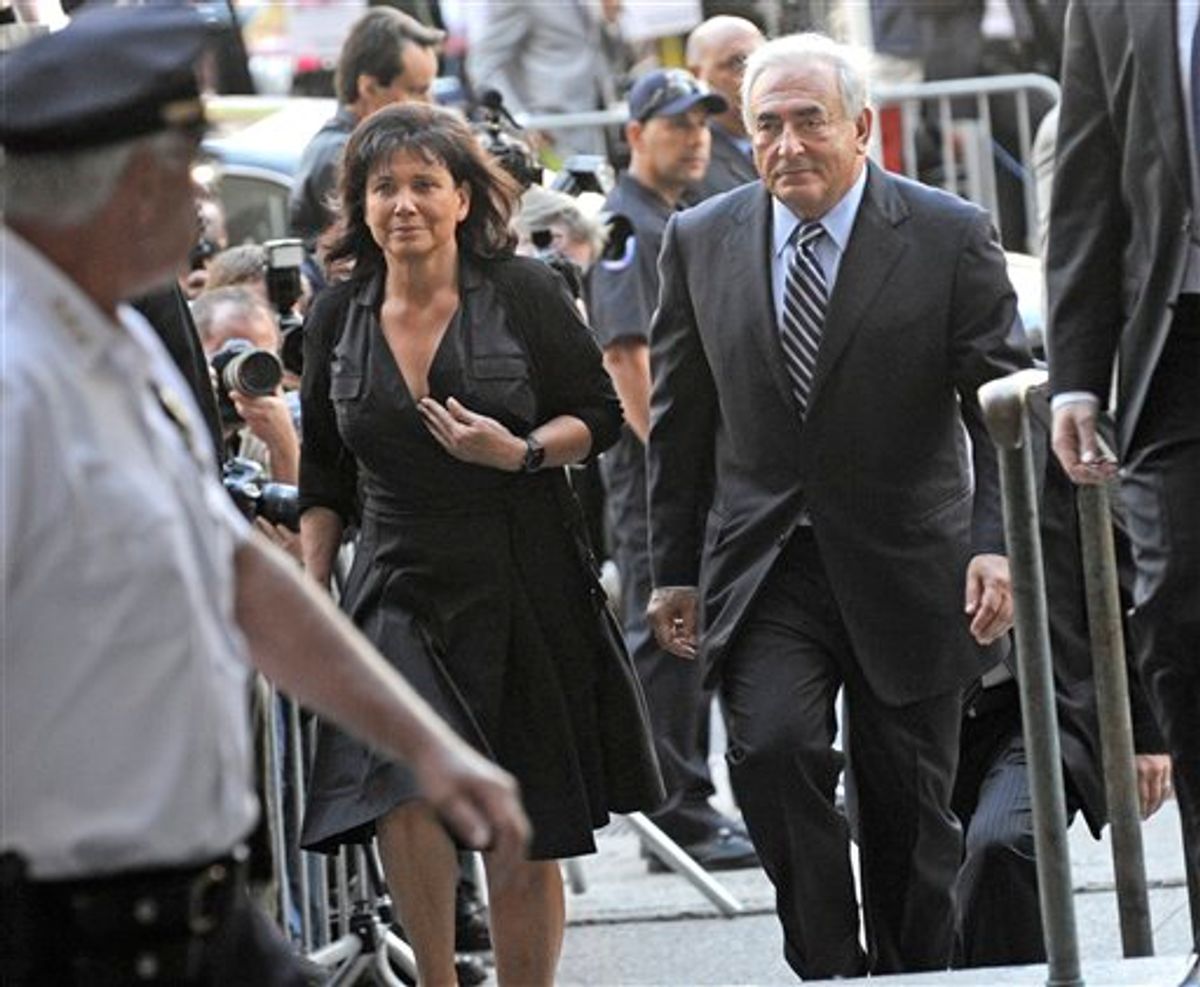 Dominique Strauss- Kahn arrives at Manhattan State Supreme court with his wife Anne Sinclair, Tuesday, Aug. 23, 2011, in New York. Strauss- Kahn, the former head of the International Monetary Fund, is hoping that the judge will agree to dismiss the sexual assault case brought against him by a hotel housekeeper. (AP Photo/Louis Lanzano) (AP)
--

Dominique Strauss-Kahn says that the past months have been "a nightmare" for him and his family and that they're looking forwarding to returning home.

In his first public statement since he was charged with sexually assaulting a hotel maid, Strauss-Kahn thanked supporters and said was grateful to the prosecutor for agreeing to dismiss the case.

A judge on Tuesday said he would dismiss the charges against the former head of the International Monetary Fund, pending an appeal by the accuser to appoint a special prosecutor.

Judge Michael Obus earlier Tuesday denied the request for a special prosecutor that would have continued the case, but the maid's attorney is appealing the decision.

If an appeals court denies the request, the case is dismissed and Strauss-Kahn is free to leave the United States.

Wearing a dark gray suit, blue shirt and a navy and gold striped tie, Strauss-Kahn appeared resolute during the brief appearance in Manhattan State Supreme Court. He smiled and shook hands with an audience member as his wife, the journalist Anne Sinclair, sat nearby. They left court without speaking to reporters.

Obus said he saw no reason not to dismiss the case. But noting that the accuser was still seeking to get a special prosecutor appointed, Obus said, "I am going to stay the effectiveness of the order I am about to enter."

Shortly before the hearing Obus had denied the request to appoint a special prosecutor, saying there was nothing that would disqualify Manhattan District Attorney Cyrus R. Vance from heading the case.

"Our inability to believe the complainant beyond a reasonable doubt means, in good faith, that we could not ask a jury to do that," she said.

Manhattan prosecutors had filed court papers a day earlier saying they did not feel comfortable going forward with the case, because they had deep concerns about the credibility of the maid, Nafissatou Diallo.

She "has not been truthful on matters great and small" and has an ability to present "fiction as fact with complete conviction," and medical and DNA evidence is "simply inconclusive" as proof of a forced sexual encounter, they wrote.

"Our grave concerns about (her) reliability make it impossible to resolve the question of what exactly happened" between the hotel maid and the former International Monetary Fund leader, they wrote.

The case captured international attention as a seeming cauldron of sex, violence, power and politics: A promising French presidential contender, known in his homeland as the Great Seducer, accused of a brutal and contemptuous attack on a West African immigrant who had come to clean his plush suite.

The Associated Press does not usually name people who say they are victims of sexual assault unless they come forward publicly, as Diallo has done.